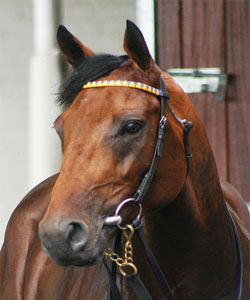 The Cartier Awards were presented on Tuesday, November 17 at the Claridge’s Hotel in London. The Cartiers are ‘Racing Oscars’ and the 2009 awards went according to script.

The Horse of the Year award went to Sea The Stars. The John Oxx-trained Sea The Stars won six Group I races in as many starts in 2009. In his final appearance, the Cape Cross colt won the Arc de Triomphe as an odds on favourite. Sea The Stars was also named the top three year-old boy.

Yeats was voted the best stayer. The Saddler’s Wells gelding, an Aidan O’Brien pupil, won the Ascot Gold Cup in June 2009. That victory marked the fourth consecutive year that Yeats made the Gold Cup his own.

Goldikova was named the best older horse. The Freddie Head-trained four year-old made a successful defence of her Breeders’ Cup Mile title in early November. There are reports that Goldikova will race as a five year-old.

Sariska, winner of the Epsom Oaks and the Darley Irish Oaks, was voted the top three year-old filly.

John Oxx was awarded the Telegraph Award of Merit. Trainer Oxx enjoyed one of his best years. Sea The Stars was his trainee.

Bobby Frankel died on November 16. A day before he passed on, Life by R R was entered in a race at Hollywood Park. That was the last entry that Frankel had made. On November 18, Life by R R, with jockey Alex Solis, ran in a sprint. He won it start to finish. However, though the entry was made in Frankel’s name, on race day, Life by R R ran in the name of Humberto Ascanio, Frankel’s longtime assistant.

Humberto Ascanio paid tribute. “I’m gonna miss him. He was a good person. I am not Bobby but I learned a lot from him. He made my life better. He made sure everybody around him had a good life. He will be missed.”

Juddmonte Farms, the name used in the US for Prince Khalid Abdullah’s string, will have 15 horses continue to be stabled now at Humberto Ascanio’s barn. Garrett O’Rourke, racing Manager for Juddmonte, said, “We have had discussions nut there has been no concrete decision yet. Hunberto has control of everything and Ventura will race in his name in the (G I) Matriarch.”

Jockey Calvin Borel will be honored at Churchill Downs on November 21 and 22. Borel won the Oaks with Rachel Alexandra and won the Derby with Mine That Bird in May 2009. There will be a bobblehead giveaway. An autograph session will enable fans to meet Borel. A roast is planned. The track will offer a drink special with Borel’s name.

Southern Halo, 26, is dead. The most successful sire in Argentinian racing history, Southern Halo died of infirmities caused by old age in Buenos Aires. A son of Halo out of Northern Sea, a Northern Dancer mare, Southern Halo sired 167 stakes winners. There were 56 Grade I winners.

More Than Ready carried the line with considerable success. The G I King’s Bishop at Saratoga was one of More Than Ready’s major wins. Miss Linda, winner of the 2001 Spinster Stakes, was a Southern Halo filly. Edenwold, Canada’s top freshman male in 2005, was by Southern Halo.

A Betfair customer won the Tote Scoop6 wager on Saturday in England. It was worth 644,398 pounds. The winner has a chance to win a bonus if he can pick the winner of a specific event next week. It is reported that the winning punter is the same person who collected a shade under a million pounds recently in another Scoop6 pool. The fifth leg in the pool was won by Shining Gale in a jumps event. There was a long inquiry. The sixth leg, won by Tranquil Tiger at Lingfield, was run as Shining Gale’s fate was being deliberated. The result stood. Tranquil Tiger was ridden by Tom Queally, who won a BC race with Midday at Santa Anita. Sir Henry Cecil trains Tranquil Tiger. Presvis, the Luca Cumani-trained runner and bound for Hong Kong, ran second with Kieren Fallon.

Summer Bird is in Japan. The triple G I-winning colt arrived in Tokyo after a 12-hour trip from the United States. The Birdstone colt will race in the 1800-metre (dirt) Japan Cup at Hanshin, a right-handed track. Summer Bird is eligible for what is called the ‘Japan Autumn International Bonus’. If Summer Bird wins, he will get 100 million yen. A second place finish will yield 40 million yen. A third place outcome will be worth 25 million yen.

Trainer Tim Ice spoke. “The trip went well. I don’t know anything about the opposition. We are ready.”

Three Godolphin distaffers have been retired. Music Note is off to stud, A daughter of A P Indy, Music Note won five Grade I races. She was third in the Ladies’ Classic in November.

Cocoa Beach and Seventh Street are the other two. Cocoa Beach won two Graded stakes in the UAE and raced with distinction in the US. She was second to Zenyatta in the 2008 Ladies’ Classic. Seventh Street struck a strong partnership with jockey Rajiv Maragh. She won several prestigious races.

Jockey Umberto Rispoli, an Italian jockey, has a new record. In 1982, Gianfranco Dettori, Frankie Dettori’s father, rode 229 winners. That was a record for a single season until a few days ago. Jockey Rispoli rode his 230th winner in 2009 at Pisa. Rispoli, 21, began riding in 2005. He has 717 wins in five years.

A 13-time Italian champion, Gianfranco Dettori retired in 1992 with 3,708 victories. Rispoli has a lot of work to do to dislodge father Dettori from that lofty position.

I have a response from Hong Kong. My application has been rejected. I am disappointed. What I applied for was a plane ticket-hotel-press facilities package. If I made the trip on my own, it will be beyond my ‘expense range’. Now, I have been turned down three years in a row. I will try next year.

I will get information from the Internet for my stories. I hope I will be able to see the Hong Kong races on television. We will carry reports on Indiarace.

There is an international jockey’s tournament on Sunday at Tuffrontein. It is in Johannesburg, South Africa. It was scheduled for Saturday. Rain forced a postponement. Frankie Dettori, Richard Hughes, Seb Sanders, Jimmy Fortune and Mick Kinane are there.