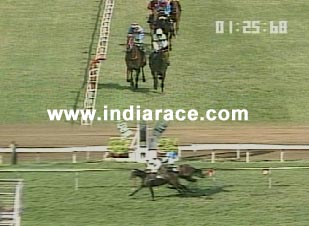 Lady Moura (McCullah) edging ahead of Endorsement (Gallagher up, racing along the rails) to win the Maharaja of Morvi Trophy

A dull programmed marked the return of horseracing to the Mahalaxmi tracks this week. But punters were not sulking, as the final results were, more or less, to their liking. The three-year-old Cristofori out of Ile Des Soeurs filly Lady Moura kept her hopes alive by winning the Maharaja of Morvi Trophy on Sunday. Stavros who is by Tecorno out of Mrs Rose, considered a classic contender by his connections, also obliged in the Mathradas Goculdas Trophy contested by Class I horses.

These two winners, hailing from the yard of Cooji Katrak, were definitely good on that given day. But frankly speaking, the performance of both Lady Moura and Stavros was not the kind of winning stuff expected from classic hopefuls. Trainer Hosidar Daji stood in for Katrak who is indisposed.

Even-money favourite Lady Moura, with Naill McCullagh astride, kept Ally McBeal company in the rear but close behind leader National Velvet, who headed the field of five over the seven-furlong trip. Endorsement, who was second in demand, cruised alongside the leader after travelling in the third position till the bend and in a trice took control of the running. No sooner he took charge aboard the daughter of Princess Clemente by , Mark Gallagher drove full steam to keep the advantage as Lady Moura came breathing down his neck with a sustained run.

The last furlong and a half of the Mahalaxmi straight was then transformed into a battleground by these two fillies, each trying to produce its best as if their lives depended on the outcome of this race. Gallagher aboard Endorsement held on grimly till the last 50m or so, but Lady Moura got stronger at the finish and strode the better of the two at the wire. Endorsement went down by a neck, but this Shiraz Sunderji-groomed filly requires a longer trip to prove her mettle, as such her supporters need not feel let down by this defeat.

Eight horses, rated 78 and upward, were supposedly taking on B. Prakash-ridden Stavros in the Mathradas Goculdas Trophy, but it didn’t take a genius to profess that this bunch would hardly prove a match for the bay colt. The bookies concurred with this view by quoting him ante post at 10 to 3 on. Stavros returned successful but was made to sweat hard for his victory by Malcolm Kharadi-partnered Cymbidium. The daugther of Royal Tern saddled by Narendra Lagad came perilously close of toppling the winner but B. Prakash saved the day for punters by giving a forceful display of his riding skills.Stavros is reported to have suffered a setback since his win.

A 100-strong mob of men and women employed as casual labourers by RWITC stormed the race tracks and squatted before the starting gates thus exposing the lax security arrangements at Mahalaxmi racecourse. This incident happened just minutes before the start of the first race on Sunday. The unruly mob stalled the loading operation of horses even as the policemen were unsuccessfully pleading with them to vacate the tracks. The workers relented 45 minutes later but a couple of horses participating in the first race showed signs of restlessness due to the exposure to intense heat which forced the authorities to cancel the event.

The Proletarian, who was a rage with the moneybags, ran true to expectations and simply outclassed the Class III opposition in the hands of Mallesh Narredu. The Imtiaz Sait-nurtured chestnut son of Conquering Hero looked a picture in the paddock and the race was as good as over the moment he swept past Voice of Freedom in the home stretch. The Proletarian will now travel to to have a go at the 2000 .

With the odds against Royal Engagement spiraling in the betting ring and those of Silver Blue coming under pressure, a golden opportunity was offered to the discerning punters to cash in on this gamble. The grey son of Rebounding Thrill, sent out in top fettle by trainer Raza Ali, responded nicely to jockey Malcolm Kharadi’s call and sailed away for an effortless win. Royal Engagement managed to wrest the second berth from the tiring Luni Junction. A probe to unravel the mystery behind the steady increase in the odds of the ante post favourite led to the disclosure that Royal Engagement has a niggling stifle problem.

Bon Apetit went wire to wire for her maiden victory earlier in the day. Colonel’s Dream uninterrupted string of failures finally saw the end, as the White Crown progeny was ridden plain hands and heels to pip Golden Glitter at the post. Ex-jockey Hanut Singh narrowly missed out on the opportunity to lead in his maiden winner through his first runner Winawin as B. Prakash-piloted Zaka held on gallantly towards the end. Apprentice Aadesh Kumar failed to do justice to his Valentine, who was the favourite to win in this race, and ended a close third.

The inaugural day’s (Thursday Nov. 16th) honours went to the cool-customer Pesi Shroff for his resolute performance in the saddle astride Current Bay. The ace professional was the saving grace during the proceedings that were otherwise drab. Pesi rode Current Bay in copybook style and was a picture of confidence in the brief duel with Majesty of Law. The speedy daughter of Placerville out of Night of Gaiety proved half a length superior to the grey mare who was joined by the late finishing Rebounding Ray as the photo-finish camera went clicking. The "third eye" failed to separate the two horses leading to the first dead heat of the season.

B. Prakash who leads the jockeys tally in Bangalore started his Mumbai campaign on a winning note. Prakash was first associated with the success of veteran Janardhan-saddled Summeroffortytwo. On-money favourite Alustar then provided him with a back to back double.

Jockey Harish Rathod hit the front with the 15 to 1 long shot Immaculate with obvious intentions of blowing up the Narendra Lagad trainee. But this ploy failed to work as the Tecorno out of Secretary Road gelding dug in towards the closing stages of the race to keep Merry Lea and Anna Pavlova at bay. The result of this race proved that Immaculate is, by far, the most under-rated horse by the handicapper at this centre. Even for this win Immaculate has incurred a penalty of just 5kg and is again rated below Anna Pavlova. Surprising isn’t it?

Jockey Mallesh Narredu rode San Vitale to a narrow victory over ownermate Cruel Intention in the Hector Plate where Soviet Fire was the firm favourite. The Bold Russian gelding hit the front with Pesi Shroff in saddle but faded out fast after reaching the 400m marker. Cruel Intention needed this run badly and will be a better prospect next time out. For a horse aspiring to win over a scurry, Lets Party was settled far back in the initial stages of the race and no wonder  the Mallesh Narredu-guided colt failed yet again failed  to cheer his followers. Coronado with Mark Gallagher to assist her, proved far too speedy for the Magansingh Jodha trained Lets Party.