El Campeador Could Prove to be a Giant-Killer 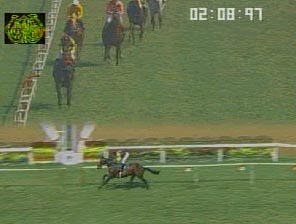 Though available at cramped odds, favourites were back in action on Sunday. Starsky, El Campeador and Noble Executive gave meagre returns but Auchinblae, Arctic Star, Sanquirico and Goblet of Fire paid handsome dividends to their supporters. Those who trusted Allianz and Sunstreak with their investments were amply rewarded too. Star Shine was the only horse that was allowed to run freely at 10’s and over.

S. Ganapathy-trained Noble Executive should count his blessings as he got away with a fleeting margin in the Magnasound Juvenile Trophy. The full-brother to Her Excellency laboured hard to deal with Sheer Silver and no sooner he had him collared came Provocateur with a spirited run. It was a close call for the favourite with the winning post coming to his rescue. Pesi Shroff-ridden Synergize finished a close fourth behind the winner and should be a different proposition when she races next. Sheer Silver, Provocateur and Absolute Dominance should all gain from this experience.

El Campeador made his maiden appearance on the Mahalaxmi tracks a winning one when going pillar to post in the hands of Malesh Narredu. The withdrawal of Bookie’s Delight, bred as half-sister to El Campeador and who is by Placerville, after developing fever on the morning of the race certainly robbed the event of some competition. The bay son of Serious Spender out of Abid’ance nurtured by Vinayak appeared a bit gross when being paraded in the paddocks for the M. H. Ahmedbhoy Trophy on Sunday. Many felt that Vinayak had overlooked the fitness level of El Campeador, but few realised that the young professional must’ve had great faith in the ability of his ward. Hence he could afford the luxury of running El Campeador well below his peak fitness.

Sceptics would not hesitate to proffer one argument that El Campeador is yet to match strides with classy horses. But the way this Serious Spender offspring carries himself and the kind of temperament he possesses, it certainly suggests that he is classic stuff. El Campeador remains unbeaten like his owner and stablemate Tobler and will not clash with him in the Kingfisher Indian 2000 Guineas, instead he will be going for the prestigious Dawn R. R. Ruia Gold Cup, which will be an acid test for him.

Starsky mediocre opposition in the Antonietta Plate included his two stablemates Reflecting and Amazing Dream. The bay son of Zaya and who is by Selkirk simply trounced his rivals after Lion of Judah had shot his bolt. Auchinblae (Razeen-Cedar Point) from Bezan Chenoy’s stable too meted out a similar treatment to his rivals. Niall McCullagh adopted successful runaway tactics on Auchinblae and kept Firecrest at bay. Much was expected from the filly Eye To Eye but she ran like a dud to finish way down the field. The performances of both Grand Gesture and Louis Cyphre were in the same league as Eye To Eye, and one cannot comprehend such a downgrade in their performances. Narendra Lagad has expressed his doubts over the intentions of his apprentice Mandeep Mann (Grand Gesture) and so has Nirad Karanjawalla against Aadesh Kumar (Saphire Princess). The stipes are looking into the matter and are expected to give their verdict soon.

It was Arctic Star (Portroe-Arctic Eyes) who set rolling the juggernaut of jockey C. Rajendra. The champion rider later partnered Star Shine, Goblet of Fire and Sunstreak to complete a quartet of winners. Arctic Star graduated from the maiden ranks but not before surviving a minor scare from Rodeo Romeo. Star Shine (Portroe-Worthwhile) came from nowhere to stun both Afilado and Khaalis. Daring Don and Champagne Gold both ran a forward race and retired for some other day.

Goblet of Fire (Portroe-Riaza) was tuned to the moment by Imtiaz Sait and the maiden filly lived up to the expectations of all and sizzled her way into the winner’s circle. Most Attractive finally showed some zest for racing and should relish a mile trip.

Rajendra’s cup of joy was soon overflowing as Sunstreak got him his fourth winner of the day. The race also witnessed Cooji Katrak-saddled favourite Raziya giving the worst performance of her career. Those who chose to keep away from her were a happy lot in the end. The Club’s vets who scoped Raziya after the race found that she had bled internally.