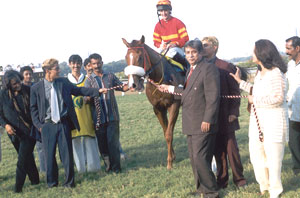 "He is the horse," said owner Capt. Jamshed Appoo, laying emphasis on the last two words he spoke after Wild Eagle won the McDowell Indian 2000 Guineas. Capt. Appoo could not have been more right. His statement about the ability of a horse holds more relevance as it comes straight-from-the-heart of a sporting owner whose horse — Rambus, was one of the fancied contenders in the race. And Capt. Appoo was not alone in paying such glowing tributes to a horse that treated his twelve rivals with sheer disdain. All those who were witness to this heroic feat showered lavish praise on both Wild Eagle and his trainer Arti Doctor. With the latest success of Wild Eagle, the lady trainer has realised her long-cherished dream of leading an Indian classic winner. The owners Mohan Thakur and family also deserve praise for showing unflinching faith in the ability of Arti Doctor and for having turned down a lucrative offer to part with Wild Eagle when he had only won a couple of races last year.

Adding some more glory to his success, Wild Eagle humbled a couple of horses that carried a ‘reputation’ into the race and whose connections were gung-ho about their chances. Irish jockey Mark Gallagher too deserves a certain amount of praise for he could have not ridden a more perfect race astride the son of Don’t Forget Me out of Tsar Maiden.

In a tactical move, Shapoor Mistry-owned Star Wish set the initial pace for Wild Eagle (who is bred at the Manjri Stud Farms) with Gallagher settling his mount third behind Kazakh. As the heads turned for home, Wild Eagle went cruising into the lead and the only danger in sight was Bangalore-challenger Ansbach with Aslam Kader in saddle. Though he is aware that Ansbach possesses a short dash yet Aslam was gripped with a sense of urgency as he quickly went after Wild Eagle. He could only get as far as the haunches of Wild Eagle that too about a furlong from home. Gallagher tapped into the reserves of Wild Eagle with a couple of backhanders and the chestnut just flew towards the wire leaving his rivals in the cold. The rest of the field was not only outpaced but was simply outclassed by Wild Eagle. Tobler had the consolation of finishing third ahead of The Pelican.

An hour later, favourite Radical Force was pulled up by jockey Niall McCullagh after having travelled just about a furlong of the mile-and-a-quarter journey of the last race of the day. It was only natural that punters started speculating about the intentions of Radical Force’s connections; they were none other than jockey McCullagh, Capt. Jamshed Appoo and trainer Cooji Katrak.

"Just after jumping out of the gates and having travelled 50mts or so, I felt something snap behind the saddle. It was a distinct sound and the first thing that came into my mind was that Radical Force might have broken his leg. The horse started wobbling and I gradually eased him up. Later, I dismounted and removed the saddle and thought he might have to be put down. Even as these thoughts raced through my mind, I started trotting the horse and lo! He was trotting sound," informed Niall McCullagh while speaking to correspondent after the race.

This unusual incident saw the RWITC officials rushing to make their own investigations. After a thorough examination of Radical Force, the senior vet of the club could not find anything wrong with the horse. It was a precarious situation for everybody. Fortunately, the footage of one of the several video cameras used for the live telecast of races showed that Radical Force had suffered a temporary stifle-lock in the right-hind leg. The connections of Radical Force heaved a big sigh of relief as they narrowly escaped being put into the dock. Jaggy Dhariwal-saddled Cajun King made most of the opportunity in this race and gave apprentice J. Chinoy another victory to celebrate.

The bay three-year-old filly Centenary brought in-foal to Legarto and who is by Storm Bird has bloomed late but what a way to bloom. The property of Dr Vijay Mallya made short work of her five experienced rivals in the Shantidas Askuran Trophy. And unlike her previous run, the Jaggy Dhariwal-nurtured filly raced from the rear and won with a margin of comfort. So encouraged are the connections of Centenary by her performance that they are now eyeing the Indian Oaks.

The fitness level of Dr M. A. M. Ramaswamy-owned debutante Our Dynasty (Razeen-Trois Etoiles) saw her safely home in the Allah Rakhkha Trophy. "Half-done" Sky Rocket (Diffident-Bazooka Babe) was propelled into the lead by jockey Pesi Shroff, which made jockey B. Prakash work a bit hard atop the winner. The runner-up made a graceful exit and is bound to make an impact in her next endeavour.

Mick’s Mystique and Speedster gave vastly improved performances to win towards the start of the day’s programme that consisted of eleven races. The pattern of running of these two horses certainly merits a look by Mr Chew & Co. The surge of power displayed by Mark Gallagher atop Star Power (Brave Hunter-Save The Future) tamed Celtic Son in the lower division of the F. K. Vakil Trophy.

Lucky Strike (Alnasr Alwasheek-Bazooka Babe), owned by the Poonawallas’, recorded her second straight victory in the hands of Imran Shaikh. Kraftwerk was hampered for room during the journey and still managed to finish a game second. Surprisingly, the "spark" shown by jockey C. Rajendra during the earlier success of this Imtiaz Sait gelding, was missing on this occasion.

The fleet-footed Palazzio (Placerville-Stately Home) produced a sparkling run in the home stretch to annihilate some speedy customers based at this centre. The timing clocked by the four-year-old filly saddled by Bezan Chenoy was just a fraction of a second off the course record. Both Anacita and Super Sword also proved far too speedy for their rivals. The former survived the late onslaught of Alice Charms while the latter, after a sluggish start, gradually came into his own to gain an overdue victory.