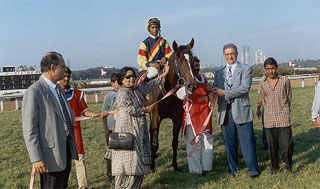 Queenscliff (P Kamlesh up), winner of the HSBC Salver being led in by owner Mr. & Mrs. K.N.Dhunjibhoy and Trainer Cooji Katrak (Left Side)

Fortune favours the brave it is said and this was to prove right for trainer Cooji Katrak on Tuesday. Fresh after a none-too-bad third behind Snow Dew in the Kingfisher Indian 1000 Guineas run just ten days back, three-year-old Queenscliff was the only horse of her age taking on an experienced lot in the HSBC Salver run on Christmas day. Though the terms of this race were not in favour of the bay filly, her trainer Cooji Katrak was so confident of the ability of his protégé that he did not shirk from taking this calculated risk.

The speedy daughter of Tick Tock and who is by Razeen ran unruffled at the wrong end of the sixteen-horse field till they entered the home stretch. At this stage, lightweight jockey P. Kamlesh put the filly into top gear and she burst on to the scene with lightning speed.

Daring Don who was busy flattering his supporters till that juncture, fell victim to the onslaught of Queenscliff. Strengthtostrength, the lion-hearted candidate from Rehanullah Khan’s yard, got his act together somewhat late to make any difference to the result. It was yet another conquest of the Salver, sponsored by the Hongkong and Shanghai Banking Corporation, for a horse owned by the current RWITC chairman Khushroo Dhunjibhoy.

Rosmini was another speedy package delivered from the yards of Cooji Katrak during the day as the two-year-old juvenile made a winning debut in the Christmas Trophy. The chestnut son of Diffident didn’t require more than a couple of strides of spearhead the field and the moment he did that the race ceased to be a contest. River Rainbow chased the winner in vain and hanging for most of the journey did not help her cause. Both Fairy Goddess and Castle Beauty warmed up late and went locked together past the winning post. The former edged out her rival in the photo finish.

Trainer Jaggy Dhariwal has dominated the first leg of the current Mumbai season and currently the veteran seems to be on a roll. Sanquirico (Twist and Turn-Blanche Rose) achieved a hat trick of wins when he raised no sweat in going over the derby trip of the Prince Royal Plate. Despite the scales in his favour, Avantage proved no match for the Pesi Shroff-ridden property of Dr Vijay Mallya.

A change of stables proved lucky for both Handsome Lad and Star Cutter as the duo went on to register maiden victories in the charge of their new masters Hanut Singh and Altaf Hussain respectively. Handsome Lad sprinted away to glory in the hands of T. S. Jodha and never faced any danger from any of his rivals.

The pick-up-money prospect Pique proved to be a costly affair for all those who entrusted their money on Sorab Jilla’s candidate. The presence of B. Prakash probably influenced their judgement. Readers should not infer that the disgraced daughter of Mischevious Music did not possess the ability to win but one thought to check whether she was value for money would have saved the punters from disaster. Prakash’s toil on Pique could only get him a second berth. A pale-looking and rather uninterested opposition was a major contribution to the success of Star Cutter. The son of Portroe also managed to break the jinx for the twin-brothers Dinsha and Munchi Shroff.

A chivalrous run from Recognition, with F. M. Berry sporting the erstwhile colours of Mohan Thakur for the United Friends Racing Syndicate, saw the Rehanullah Khan ward overcome K. P. G. Appu-piloted Habit close home. In the process, Hormuz Antia’s ploy to land a well laid out gamble with his other runner Don’t Look Twice failed. The favourite never raised any hopes of obliging though he managed to put in a late run to finish fourth. Crisscross was knocked out of contention by Valentine’s Day in the early part of the race.

Lesser-fancied horses usurped the last three races on the card. The first to score was Adam’s Delight who unleashed a powerful run in the straight. Favourite Weathering failed to get a clear run towards the rails and seemed reluctant to take the gap. Discover was never in the hunt and finished so.

Subhag Singh-saddled grey filly Soi Dissant went neglected in the betting as Newyearseve garnered support on ‘inside information’. The support for the filly sporting the colours of owner Iqbal Nathani gradually waned at the time of the race with large amount of the betting being channelled towards Rewarding King. Both these horses were never sighted at the busy end with C. Lemaire extracting the best out of Soi Dissant. Secret Force gave a much-improved performance in the hands of Pesi Shroff to finish a good second. P. S. Chouhan-ridden Tactful also showed some zest when pegging back Raggaza for the third place.

Finally, it was another grey horse Piece of Art who came with raking strides in the straight to overwhelm Winning Melody close home. Jockey P. Belose gave an inspired ride to he S. S. Shah trainee to complete a well-deserved double. Smooth Operator with C. Rajendra aboard gave a dismal performance after running a forward race till the final lap of the mile journey.