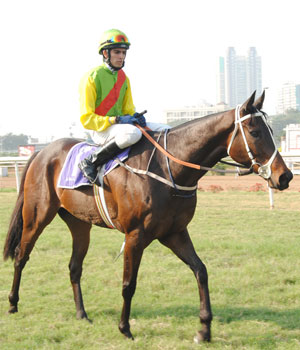 The Christmas Day races were a delight for the followers of money as all the races were won by well supported horses and no ‘uncertainties’ cropped up in any of the eight races. For most of the punters, it was Merry Christmas alright. The RWITC too in it’s program had ensured that the Christmas spirit was conspicuous. The presence of popular Star Abhishek Bacchan soared the crowd’s spirit and he was given a grand reception. Abhishek on his part came about as a very down to earth human obliging every admirer with either an autograph of a photograph, posing warmly with just about anyone who approached him. Also, enhancing the Christmas celebrations, a band of young gentlemen went around the racecourse singing popular classic carols and entertained the patrons. So all were smiling on the day at the races, not so sure about the bookmakers though! But then, it’s the bookmakers who always have the last laugh, don’t they?

Pesi Shroff trained Onassis (Glory of Dancer – Rahy’s Serenade) scored his second victory in as many starts this season, this time taking home the Maharaj Jiwajirao Scindia Trophy (Gr3) in a well thought out strategy, implemented by steadily improving young man – Zervan. If the timing of the race was not particularly impressive, blame it on the initial crawl. The first half of the race was woefully slow. Air Play soon settled to lead the field, with Ciel Indienne and Camacho in tow, Onassis had only Native Knight behind him.

Air Play kicked on once they entered the straight and kept going. Ciel Indienne threw in the towel soon. Onassis picked up speed and approaching the distance post collared Air Play with ease. Native Knight progressed steadily at the turn but took his time to get into top gear, which proved fatal. Onassis had established a handy lead by then and never let loose his grip on the race. He won it with a fair measure of comfort. Native Knight ended second just ahead of Air Play.

The horse under the spotlight was Nefyn (Senure – Machrihanish). The sprinter of the highest repute was entrusted to a rookie claiming a five-kilo allowance to negate the heavy impost of 63 kilos on handicap. As it turned out, apprentice Akshay did a splendid job and roared his way to the front in style to peg back Saints N Sinners, who was threatening to crush Nefyn’s attempt to make a successful comeback.

Saints N Sinners galloped to a plan. He hit the front in a trice and worked up a solid pace. Bullet, Dovers Hill and Ocean Wish followed him closely; Nefyn was a length and something away with Demonstrator tailing the bunch, a detached last.

Saints N Sinners stole a march hoping to catch Nefyn and the others unawares. He sped ahead to a three-length lead and showed no signs of relenting while galloping past the distance post. Nefyn worked his way on the outside and in the final furlong gathered his fearsome momentum. With 100 to go, Saints N Sinners was still more than a length ahead, but Nefyn’s power-packed acceleration left no doubt that he would eventually get past and win. Nefyn won with a measure of comfort despite the verdict being just half length. Saints N Sinners ran a great race too and did commendably well to finish alongside Nefyn. Dovers Hill too finished on well, in the vicinity of the winner as did Bullet.

The Mistrys’ joy was doubled when their property Ishpingo (Major Impact – Speed of Light) easily thwarted Sorrento’s start to finish bid, to clinch the Mid-day Trophy. From the beginning it was clear that this was going to be a two-horse race just as the market trends pointed. Sorrento and Ishpingo proved superior to the rest and the pair was well ahead of the rest from the start. Sorrento enjoyed a couple of lengths’ lead coming into the straight, but Ishpingo loomed large all the time, finally taking charge at the distance post. Ishpingo finished on with a forceful gallop and sailed past and away from Sorrento in a very convincing manner. Unknown Rebel stayed on to claim place money.

“This is my first time at the Mahalaxmi racecourse and I am impressed. I have seen horseracing in action on screen so far, but this is a hundred times more exciting. We actors too train a lot as you train your horses, and it is great joy when such efforts result in a positive manner. My dad (Big B) and mum (Jaya) too have not been here and I am going to urge them to pay a visit to the racecourse in near future,” said Abhishek.

Sharaarat (Ace – Shamaal) won the Macau Magic Million. Although the margin of victory was a close one, Sharaarat’s victory was never in doubt once she surfaced to get past early leader Angels Quest. As they jumped out, Sky High was soon overtaken by Angels Quest who snatched the early lead. Sharaarat improved to run second with Strategy and Sky High alongside. Naserian raced further back towards the rear of the field.

On entering the straight, Angels Quest was at the helm with Sharaarat about two lengths adrift. Sharaarat began to quicken and the timing of her surge couldn’t have been better. She surged past the leader and shaped like a winner with a 100 still to go. In the dying moments, Naserian came with a real fast flourish to end very close behind Sharaarat and just ahead of Angels Quest.

Ranthambhore (Hymn – Radiance) put his last start loss behind him and reproduced the brilliance he had shown on his debut in Pune. He rose from the mid-bunch soon on entering the homestretch and easily went past the grappling pair of Secret Service and Snow Blaze both of whom were in command until they turned for home. Ranthambhore came alive with a spirited finish at full steam and scored his second career victory from three starts in an emphatic fashion. Vibgyor flew towards the end at snatch the runner-up berth from Secret Service, whose start to finish ploy came a cropper. Snow Blaze who was in the thick of action ended a tame fourth.

Bling (Oath – Satin Lover) pulled off a stylish start to finish victory in the Nawabzada Rashiduzzafar Khan Trophy. He dictated the pace as he liked, starting with a very friendly tempo initially and then stepping up gradually. Titian and Marauder followed Bling closely, while Dancing Dame didn’t look the part at any stage, though he was not too far behind.

Bling brought the field home and soon Marauder threatened to topple his lead. Titian was panting to stay in contention while Dancing Dame never raised any hope. Bling, in a sudden surge, got stronger with a little more than a furlong to go and marched on ahead adding turf between herself  and Marauder and stormed further ahead to post an aggressive victory. Marauder could do no more than follow her home. Titian ended a neck behind Marauder.

Greatness (Emerald Cat – Jungle Girl), from trainer Narendra Lagad’s yard,  won a grimly fought battle with Banana Boy and his rider P Trevor extracted all that Greatness had to offer in partnering her for a well deserved victory. Settling straight ahead and into the lead, Greatness held the advantage as Banana Boy had to make his way from some distance behind. Banana Boy made rapid progress midway in the straight and at one point gave his supporters a lot to shout about. He covered the distance to get close on the outside to greatness and past the distance post the stride to stride battle began, stretching all the way to the winning post. Both Trevor and veteran Malcolm Kharadi went all out, but Trevor and Greatness showed a lot more grit and application to stay stubbornly ahead. Star Blessings who was prominently poised failed to up the intensity and ended a tame third.

Augustus (Warrshan – Southern Star) who was strongly supported in the betting ring, won the last race of the day, but not without some anxiety. He seemed to have sealed the issue early in the straight when he built what seemed an ample lead coming into the final furlong. His own stable companion Atlantic Star warmed up and produced a lively finishing gallop to all but topple the favourite. With the winning post in sight, Augustus was well clear and travelling nicely too when Atlantic Star started to cover ground with alarming speed. Fortunately, Atlantic Star did not have enough ground to do the Full Monty, as the winning post arrived to the rescue of Augustus.  Atlantic Star had to be content with the runner up berth despite his brilliant effort. Dare Devil too finished on well to earn place money.

Jockey C Rajendra was the lone pre to score a double.