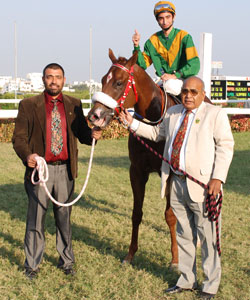 Brazilian rider Carlos Henrique pulled off a sensational victory on Anupam Sharma trained Ashok Chakra in the Deccan Juvenile Million. The six furlongs sprint, a Terms race for two year olds was the highlight of Monday’s races at Hyderabad.

Sheer Genius, a runaway winner on debut, was the popular choice to win the Million, while Ashok Chakra, also a first time winner was available at liberal odds. Ashok Chakra hit the front quickly at start, followed closely by Sheer Genius. On the home stretch Ashok Chakra kept kicking on with Imran Khan on Sheer Genius trying his best to go past the leader. Montpelier was trying to force his way between the two and was badly sandwiched. Henrique kept riding out till the finish and had Ashok Chakra a ‘short head’ in front of Sheer Genius at the wire. Montpelier moved strongly after being shown the daylight but was a bit late and had to settle for the third place ahead of  Ashwa Shakti.

P.S.Chouhan continued with his exploits with a treble, to take his season’s tally to 36. With more than half the season remaining, Chouhan looks to be all set to break his own record for the  ighest winners in a season. Vijay Monarch, Win And Enjoy and Grand Connection were the successful mounts of the ‘Champ’. The first two named were from Deshmukh’s stable while M.V.Narayana Rao trains Grand Connection.

Vijay Monarch (Diffident-Post Impressionist) carried a back breaking weight to an emphatic victory in the Baile Lalitha Pershad Memorial Cup, a 1600 metres trip for horses in category II. Royal Shaan set a strong pace from the start and had established a big lead of almost eight lengths as they went past the 1000 m board. On the home stretch Royal Shaan started to lose steam and Vijay Monarch who had raced in second throughout surged ahead with ease and went clear to win by 2 ½ lengths from Drayton. Royal Shaan held on to finish third from Onera Onera Onera.

Chouhan had to work hard on Win And Enjoy (Warrshan-Outtostealthescene) to snatch the race from the favourite Hidden Power at the post, in the lower division of the Malvado Plate, a five furlongs dash for maiden 2 year olds. Racing towards the rear in about seventh position till approaching the final turn, Chouhan pulled out Win And Enjoy to make a move on the on the extreme outside as they straightened up. The filly started to drift out under pressure but gained ground in the last 100 metres to score on debut.

Grand Connection (Rebuttal-Anacita) completed a hat-trick under Chouhan, in the higher division of the Meghalaya Plate. Chouhan urged the daughter of Rebuttal with just his hands and heels and the filly raised a fluent gallop inside the last 2 furlongs to streak through the front running Caligatae and China Pearl. Sun Strikes rallied on to finish second a short head in front of Valentine who  covered plenty of ground on the straight.

L.D’Silva’s Anacostia (Clodovil-Almost Perfect) pulled off a victory over the in-form Rajkumari, in the lower division. Apprentice Kuldeep Singh took Anacostia to the front quickly at start and led all the way to the finish. Rajkumari was in futile chase throughout and lost out the second spot to Naughty Gal close to the finish.

Anupam Sharma’s ward Shades Of Victory (Epicentre-Evening Bride) produced a dazzling run in the last 100 metres to pick up her maiden win in the opener, the Singh Plate. Kohinoor Forever who looked good till beaten by Shades Of Victory continues to be a maiden.

M.Sathyanarayana’s Russian Rhytham (Tirol-Russian Maid) received strong support in the betting towards race time and the filly justified the support by romping home in the Twin Cities Cup. Apprentice J.Vikas had Russian Rhytham in front quickly at start and led all the way to wrap up the five furlongs sprint in a smart timing. Art Dealer, Ektto Ektto Ektto and Samvida filled the frame in that order.

P.Trevor rode Shehzad Abbas’s Thirteen Black (Don Micheletto-Taurina) to a grand stand finish in the Track Lightning Plate. Weaving his way through half a dozen horses on the straight Thirteen Black accelerated rapidly to surge past Staccato in the shadow of the winning post. All The Fun and Lake King rallied late to fill the frame.

Zoheb Shaikh trained Benita (Emerald Cat-Prelude To A Kiss) showed a clean pair of heels to the favourite Bold Attack in the higher division of the Malvado Plate, a 1000 m dash for maiden 2 year olds.