Alylady Has the Last Laugh 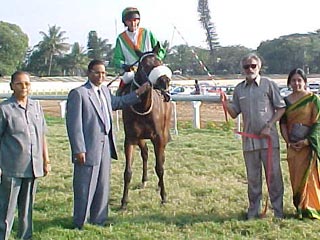 Alylady defied the top weight quite convincingly to lift the Royal Calcutta Turf Club that featured Friday’s races. In a cluster finish, four runners were involved in the fight for minor berths. Rank outsider Ronson got the runner-up spot at the expense of Winelight, Joe The Pro and Grisogono. Racing on the day lacked competitive flavor, with form fluctuations and inexplicable performances causing many an eyebrow to be raised.

Alylady had run a suggestive third behind Vivid Dreams in her last essay but since she was assigned to carry the top weight of 62.5 kgs, many reckoned that it might prevent her from having a decisive say in the race. But the talented four-year old filly proved too superior to the opposition. The pace of the race too suited the filly as she came through with a strong run inside the final furlong to overhaul the front-runners with a measure of comfort. Jockey Prithviraj attempted to win on Winelight from the word `go’ but the Tecorno progeny who runs best when not hassled by others when running in front, was chased by the bottom-weighted Golden Collection which perhaps affected his performance. In the event, Golden Collection, the second favourite, finished a dismal last while Winelight weakened to finish third. Ronson came from behind to take the second spot but in doing so, he cut across causing a hampered passage to Grisogono who did not have the luck of the race in his favour. But the objection by the rider of Grisogono against the jockey of Ronson was not upheld, as the interference apparently did not make a material difference to the outcome of the race.

Whenever jockey Aslam Kader is in action, he puts the race-goers in a dilemma because either he is indifferent or too good. Barroness Orczy received strong support in the betting ring in the Kailash Trophy but those in the know backed Aveyron. The daughter of Green Forest Aveyron had finished a dismal last over a mile in her last essay with the same jockey to guide her; and as such, it was difficult to fancy the chances of the three-year old filly with any conviction. But in the event, Aveyron who assumed command at around the 800 metres marker, held on to win from a late finishing Southern Host. Favourite Barroness Orczy made no show.

Yet another favourite to put up a dismal show was Street Smart. Different Ballgame was slammed in the betting ring and the three year old daughter of Procida duly won, with a great deal of comfort from Sunchaser. Street Smart was not smart at any stage of the race and failed to figure among the first three runners. While jockey Rajesh could blame interference at the start as the reason for the poor run of Street Smart, quite strangely how this sort of bad luck dogs only the favourites continues to be a mystery.

Screen Play who had lost close home to Winelight had the best credentials in the Belgaum Plate (Div II) and the got-abroad fillly held on to win from Whattagirl and Kingston Heath. What A Pleasure was a let down. In the upper division of the race, Padmanabhan trained Queenstown brought off a stunning upset at the expense of Ma Baker and Flash First. Ma Baker was slowly off from the gates and the luck of the race did not favour the four-year old filly. Flash First put up a poor show.

In the race for first season runners, Bernstein staved off the challenge of Steinlen quite competently, with the latter who was slow in the stride, left with a difficult task of covering lot of leeway on the front-runner. In the day’s other action, Dark Felt held on to win from Agnivarsh who galloped in snatches.