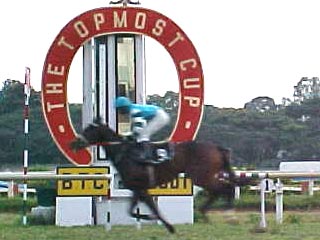 Extreme Contact’s upset win in the Rohini Cup which featured Saturday’s races only served to confirm the raising status of his sire Conquering Hero as a stallion of immense value. With the major thrust of Indian racing being sprints, the progeny of Conquering Hero who are adept at these distances, having been winning a fair share of their races. Extreme Contact floored a competitive field, with a fine turn of foot at the expense of fancied Go Honey Go and Magic Stride.

Soviet Bay had a good airing as the jockey took the son of Bold Russian on a start to finish mission and retired gracefully inside the final 300 metres. Magic Stride and Go Honey Go were handily placed to launch their assault but Extreme Contact took everyone by surprise with a well timed run to win with a great deal of comfort. Go Honey Go just about held on edge out Magic Stride for the runner-up spot while Daggers Drawn who was running over an unsuitable trip, had a useful outing. Soviet Bay should be too good to miss when he runs in an age group race next month.

Harish who steered Extreme Contact to a facile win, was astride another winner in the earlier race. Astrid had the credentials to win but with Caressing having shown remarkable improvement since her last win, her task was bound to be a tough one. Jockey Pesi Shroff on Caressing had the first run on his opponents but the Twist And Turn progeny who took charge rounding the final bend, shaped like a winner but the finishing burst of another daughter of the same sire, Astrid undid the front-runner’s chances albeit on the post, a mere bob of the heads make a difference to the outcome of the race. Forest Rose, who had been given a light ride last time out, filled up the third slot.

Ganapathy trained Noble Nancy had the benefit of a race run and this made a crucial difference to the outcome of the Top Most Cup, a terms race for two-year olds. The fact that Ching Mai who was making her debut was in the fray as a final entry after paying Rs 60,000 aroused the curiosity of the punter but the daughter of Salute Her, after leading all the way, surrendered to favourite Noble Nancy in the shadow of the winning post. The first two placed horses are by Diffident who is an influence of speed while the dams of both the horses excelled over staying trips.

The effortless manner, in which Cool Camp won, raised many an eyebrow. The victory of Cool Camp raises two questions: 1. What was Cool Camp doing last time out when finishing a poor fourth? 2. Whether everyone in the race was on Cool Camp? The latter conclusion appears more appropriate especially going by the one-sided betting that came on Cool Camp and the manner in which the favourite was allowed to dictate the race.

Dominic trained Chanel brought off the biggest upset of the day, winning the 1400 metres Sivaganga Plate at the expense of favourite Crown Dancer. However, Dominic’s other ward Rock Party who received total support in the betting ring enjoyed the same during the race.