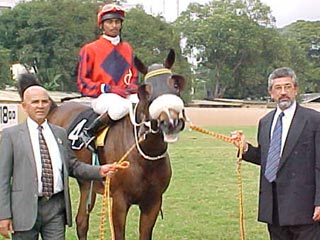 Axe (Shobhan Babu up), winner of the Garden City cup being led in by trainer C.A.Kuts and owner D.Vinod Sivappa

Racing on Friday was lackluster. With the race meant for first season runners having gone void, the rest of the programme that emerged lacked competitive interest. The day belonged to trainer Kuts who managed to squeeze a double through Axe and Mayfair.

Crystal Moment who had finished a noteworthy fourth in his last essay was made the favourite to win the Garden City Cup which featured the day’s races but the fact was all the runners in the race were in with a chance as all of them seemed to have reached their optimum handicap mark. In the event, Axe just about held on to win from Crystal Sky who warmed up late, finding the seven-furlong trip sharp for her liking. Spark of Life who has back in action after a setback in training, was a close third while Crystal Moment fared poorly, being unfavorably positioned and not having the wherewithal to cover the leeway.

Spark of Life led from the word `go’ but weakened while turning for home as Axe, sporting blinkers for the first time, surged ahead. Crystal Sky joined issue on the wide outside but with Axe breaking into a useful lead and the others plodding and failing to pick up momentum, the front-runner’s win was always on cards. The fact that Crystal Sky closed up the leeway considerably was more due to the fact that Axe was perceptibly slowing down and not because Crystal Sky had changed gears as it were.

In a close finish, favourite Trillennium edged out Icelandic Hope to win the Gomos Plate (Div I). Trillennium took charge on turning for home, with Icelandic Hope ranging alongside. The duo fought the length of the straight, with Trillennium just about holding on to win. Shining Conquest was a faraway third. In the lower division of the race, Mohan Valavi trained Indigenous came out of the maiden’s ranks, with none of the runners in the race showing a keenness to make a match of it.

Had jockey Imran Khan been more enterprising on Nesara, the result of the Nethravathi Cup could well have been different. Wool U Gooli who led from the start was lucky to survive as Imran Khan contrived to get into traffic problems. By the time Nesara, who was the medium of a failed king-size gamble last time out, could get going, Wool U Gooli had established a winning lead. The late surge only served to bridge the gap to about half a length. Dancing Beat who had no credentials, ended up as a piping hot favourite and it came as no surprise that the daughter of Ajaad was not in a contention at any stage of the race. Jockey Prakash has found himself more on loosing favourites this season. Most of the runners appeared to be there more for an airing.

Our Ambition, who had the services of Prakash, was considered a good thing as the four-year old gelding had lost a certain race last time out due to traffic snarls. This time out, with Prakash electing to bolt with the favourite, Our Ambition ran out of steam well before the race took a serious turn. Mayfair, in the hands of Norton, proved too good and won with a great deal of comfort from the favourite. Pink Squirrel, who was given too much to do by jockey Imran Khan, was a suggestive third.

Visiting English jockey Norton was in his elements as he guided another winner in the last race of the day. The hitherto expensive failure Always Dancing finally came out of the maiden’s ranks, taking charge inside the final 300 metres and winning with ease from Crystal Delight.

Favourite Startrix was withdrawn from the way at the starting gates on veterinary grounds and Aveste ended up enjoying the favouritism. Bold Premier set a fast pace which enabled Aveste to overcome the sharpness of the trip and warm up in time to go clear inside the distance post. Crown Ice was putting good work close home and ended up second best. South Cove’s leisurely surge enabled the daughter of Serious Spender to be a suggestive third and place her in line for an early success.