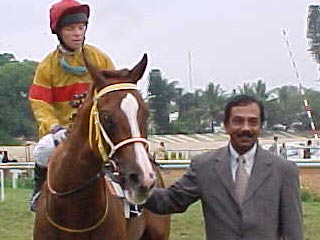 Elusive Emperor (Francis Norton up), winner of the Delhi Race Club Cup being led in by trainer S.Padmanabhan

The facile win of Elusive Emperor in the 2000 metres Delhi Race Club Cup raises a few questions. Elusive Emperor has been a listless performer whenever guided by Aslam Kader but this time out, with Englishman Norton in the saddle, the son of Green Forest led from the word `go’ and then kicked clear when challenged by his opponents. Same was the case with Antwerp who had flopped miserably whenever Aslam Kader steered another son of Green Forest but under Norton, the gelding recorded a smashing win. Is it by any strange coincidence, the progeny of Green Forest don’t seem to relish Aslam being in the saddle or the jockey himself doesn’t have a clue as to how to ride these horses? The talented saddle artist otherwise has been pretty successful though his career graph of late has been pretty ordinary, barring occasional flashes of brilliance.

Be that as it may, Ganapathy trained Spirited Effort who had recorded a labored win over 1800 metres in his last essay and the improving Air Strike were expected to fight the finish, with only handful inclined to fancy the chances of Padmanabhan trained Elusive Emperor. As is the wont with the son of Green Forest who relishes running freely in the front, Norton had Elusive Emperor running abreast of the field, with Air Strike in close attendance and the rest, a few lengths adrift. Elusive Emperor came into the straight a couple of lengths ahead of Air Strike who appeared to be gaining ground on the front-runner but the former was in no mood to give up and kicked clear to win quite comfortably. Aerobee finished third. Spirited Effort put up a poor show and the son of Foyer, despite his Pune Derby performance, is run of the mill. Chevalier seems to have lost his form totally.

Figaro’s victory in the 1200 metres Krishnarajapuram Plate must have brought great relief to his connections as earlier in the day, luck had deserted them on favourites Tassha and Stormsky, the last named loosing by a whisker to the late-finishing Royal Movements who owed his win mainly to jockey Shakti Singh’s forceful efforts. Tribal Dance was a suggestive second despite none too vigorous effort by jockey Imran Khan. Tassha who had run an unexpended second when least expected, was made the firm favourite on the basis of that run but the favorite flopped miserably inside the final furlong after doing all the front-running. Lake Baikal who got through on the wide outside with a flourishing run, staved off the challenge of the late-finishing I Me And Mine on whom jockey Imran Khan was unable to get him going a wee bit early.

Rio Tinto who was running after a long lay off, duly won the H C Patel Memorial Plate despite receiving a check in the run in for home from Parisien Belle. Arroganto showed lot of improvement when finishing a good second ahead of Anchor. Dark Felt recorded his second straight win, staving off the challenge of Beautiful Bird close home.


In the race for first season runners, Secret Silver won at the expense of the late-finishing Kingley who missed the berth narrowly. Fancied Slovania, Spark of Zeus and Limitations gave disappointing performances.