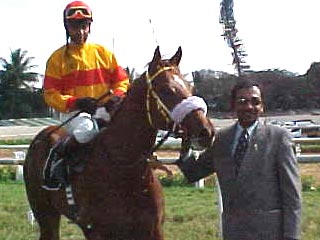 Prince Valiant (Aslam Kader up), winner of the Bharachukki Plate being led in by trainer S.Padmanabhan

Trainer Padmanabhan enjoyed the most productive day of racing during the on-going winter season on Friday. The talented trainer who was going through a lean patch, struck gold by recording a treble and narrowly missing the fourth one by a whisker. The reason to celebrate for the trainer was the spectacular debut of two-year old gelding Prince Valiant who served notice of his classic potential. Half-brother to the celebrated Winning Pretty, whom Padmanabhan trained to great success, Prince Valiant is headed for bigger glory and should be the one to follow in the forthcoming juvenile millions at Mumbai. The amazing turn of foot and the immense scope for improvement after this run makes this son of Green Forest as an extraordinary specimen.

Easily the best juvenile seen in action this season, Prince Valiant went into the Bharachukki Plate as an overwhelming favourite. Prince Valiant burst out of the gates like a scalded cat and had gone clear of the field even as the others were finding it hard to find their feet. Prince Valiant was clear of the field at the top of the straight and despite being eased up in the final furlong, the two-year old clocked a smart time of one minute 14.63 seconds, with about 6.5 metres false rails up. The performance is put in perspective when one compares the timing clocked by Star Festival in a race meant for horses rated 30 to 45 after being fully extended which was one minute 15.35 seconds. The other two-year olds in the fray were flat-footed so much so that the race was over in the first furlong itself. There is no point in mentioning who finished second and third because they have no value as a reference for future.

Padmanabhan’s other ward Crystal Sky had served notice of her imminent success when she had run a brilliant second behind Axe in her last outing. The five-year old race mare Crystal Sky who is out of one of the most durable race mares namely Empress of Rome stood out in the paddock parade. Jockey Harish had little difficulty in steering the got-abroad race mare to a start to finish victory. Augill Castle who was the firm favourite, once again finished second best and this son of Twist And Turn has this knack of finding one better in almost all his outings. Top-weighted Royal Satin had a useful outing.

Star Festival was another who boosted Padmanabhan’s tally for the day to three. The five-year old race mare Star Festival had gone down narrowly to Al Habib in her previous essay but entrusted to Irish jockey Nail McCullagh this time out, the daughter of Don’t Forget Me quickened nicely inside the distance past to stave off the challenge of the front-running Machrie Bay. Grisogono once again was picking up momentum when the cause had been lost.

Had apprentice jockey Ramesh packed punch at the finish, Charente would have staved off the challenge of Sheer Blossoms and this would have enabled Padmanabhan to get four winners for the day. Charente assumed command inside the final furlong and shaped like a winner but the finishing burst of Sheer Blossoms ensured that the latter just about nosed out the second favourite. Favourite Skeena ran a poor race.

Just Do It provided its new trainer Loknath a winner at nourishing odds. The son of Portroe came through the rails to win with a great deal of comfort from a late-finishing Jai Bharath. National Tiger proved too good for the opposition in the Silicon Vallye Plate, keeping Indigenous at a safe distance.