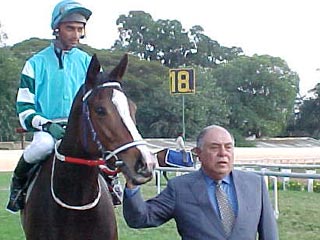 Extreme Contact (Harish up), winner of the Shantiniketan cup being led in by trainer R.R.Byramji

Extreme Contact’s third successive win served to highlight the growing status of his sire Conquering Hero whose progeny have been striking rich of late. The daughter of Conquering Hero, Extreme Contact was the overwhelming favourite to win the 1200 metres Shantiniketan Cup despite taking on a creditable opposition in the Saturday’s feature event and the three-year old filly showed admirable fighting qualities in staving off the challenge of this year’s Sprinter’s Cup heroine Symphony of Fire in what was virtually the last stride to get the nod on the photo.

Symphony of Fire has been pretty inconsistent, with one good performance followed by a couple of woeful displays. On this occasion, Symphony of Fire seemed to relish the modest quality of the opposition. In a fast run race, Winelight and Allabreva fought for the lead from the word `go’, with the former this time out getting the better of the latter who was below par. Extreme Contact who raced at the wrong field till turning for home, had to cover considerable leeway but the filly quickened nicely but in doing so, ran into Symphony of Fire who was shifting out. As a result, jockey Harish had to check his mount who lost a stride or two but the favourite recovered quickly and came up with a sustained run to snatch the issue on the post. Winelight battled on resolutely to take the third spot. While Appu ended up a fine for not keeping a straight course, jockey Harish who has been doing extremely well during this season, was suspended for two race days for careless riding. The winner clocked a time of one minute 15. 04 seconds which again puts in perspective the high quality performance of first-timer Prince Valiant who on Friday had clocked one minute 14.63 seconds despite the jockey dropping his hands in the final furlong.

Trainer Ganapathy had a profitable day with a double. Star Chieftan who had failed to deliver the goods at the Golconda 2000 Guineas at Hyderabad, tackled a modest opposition in the 1600 metres Brahmaputra Stakes, a race for horses rated 30 to 45, the supporting event of the day. Daggers Drawn who ran without blinkers, showed an appreciable improvement in form and shaped like a winner but Star Chieftan who came from the rear with a rattle got the measure of the front-runner inside the distance post. Whatmore, who was running after a long lay off, got a nice run along the rails and just about pipped Daggers Drawn for the runner-up spot. Tapatio was fancied despite the trip being sharp for this son of Twist And Turn but it was not the distance which killed his chances but his slow getaway at the gates which undid everything. Affined was a noteworthy fourth.

Ganapathy’s other winner came through Star Splendour who edged out Imperial Legend in a battle of attrition. The luck of the race went against Kyosoba who was hampered along the rails and as a result, the gelding lost ground and had to be shifted out. Nevertheless, he was a close fourth.

Steinlen who had run an impressive second in his last run, was made the on-money favourite for the 1100 metres A P Kothavala Memorial Cup but the son of Excalibur’s Lake gave a poor account of himself, finishing a dismal fifth. Grace And Faith was the beneficiary of a modest and a disinterested opposition and posted a win at nourishing odds.

Anzac, who had disappointed on innumerable occasions, finally came out of the maiden’s ranks when he is about to turn five. The son of Channel Command perhaps fared better after being stripped of the blinkers but nevertheless drifted out inside the final furlong despite which he was good enough to spare a few lengths to Odeon. Splendid Ally who came in for sustained support, performed poorly. Perhaps, the pace-making job she did for her stable mate Smart Chieftan two years ago in several classics, has taken away her zest for racing.

The up and coming jockey Harish had a double for the day when he guided Rebelwithacause to a facile win in the 1200 metres Amathos Plate. There was a flood of money coming on Genuine Article who did not have any recent form to go by. On the other hand, Rebelwithacause had lost a certain at Mysore as the jockey on that occasion, failed to keep his mount on a straight course and let it drift to the outer sand despite which the son of Sizzling Melody had lost in a photo. Now running on better terms vis-à-vis the top-weight that the favourite had to carry, Rebelwithacause took charge at the top of the straight and went away for a comfortable win. Kilkemy finished second ahead of Genuine Article who gulped down big public money.

Trainer Dominic was the other professional who had a double for the day. Apart from Grace And Faith, his other ward Nimitz won the race meant for the lowest rated horses with effortless ease.