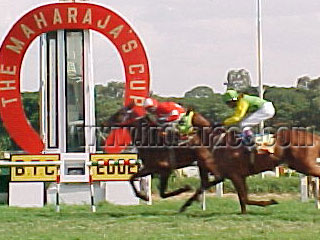 Iflookscouldkill (Harish up), winning the Maharaja's Cup (Grade II) from The Pelican (Srinath up).

The richly endowed Gr 2 Maharaja’s Cup lived up to the expectations of being a graveyard for the favourites. The terms of the races is such that horses that have placed in Classics enjoy a distinct pull in weights that helps them to score over their more illustrious opponents. Rashid Byramji trained Ifllokscouldkill’s win as such was not exactly a surprise though there was a quantum jump in his performance-level.
The Pelican, the overwhelming favourite, had all the chances though he had to weave his way through a difficult passage rounding the final bend but what went against him in the final analysis was that he lacked that extra bit of fitness because after necking ahead of Iflookscouldkill, he tired out and the latter pulled out his reserves to win by half a length. The Pelican went into this race with the benefit of an unimpressive mock race but had been subjected to grueling work that however failed to fetch the desired results.
Top-weighted Appeaser had all the chances but sadly he had to travel wide all the way, jockey Shroff unable to tuck him in and as a result, he had to make his move earlier than he would have preferred and the son of Twist And Turn was sorted out inside the final furlong. Tapatio covered plenty of ground from behind and was finishing on the fastest but the winning post had already come to the rescue of the front-runners and he ended up an impressive third.
Alameda set the pace as the starter dispatched the field for the 2200 metres trip, with the fancied The Pelican, Iflookscouldkill, Appeaser in mid-group while Tapatio graced the rear. Approaching the final 700 metres marker, The Pelican was cramped for room and he fell behind. Iflookscouldkill, who was nicely placed as the horses straightened for the run in for home, surged ahead inside the final 250 metres even as Srinath on The Pelican weaved his way through a difficult passage. The son of Placerville, The Pelican came through with a flourish only to fade out when everything seemed to be going his way. Ryan Marshall on Tapatio too had maneuver his way through a crowded field and was finishing the fastest which only added to the heartburn of his ardent supporters who had hoped for a big upset.
The Pelican would come on a lot after this run and should not be hard-pressed in the Leger. Tapatio too can find himself in the fray as a final entry.
Affined had the credentials to win the Broadacres Stud plate (Div I) as the son of Don’t Forget Me had shown out when given a light ride by Alford last time out. However, Potential Force who had come into this class after a steep penalty enjoyed public support along with Butter Sponge. Affined took charge inside the final 350 metres and though Butter Sponge threatened to upset his applecart, the lesser fancied from the Byramji yard had enough reserves to win with ease. Butter Sponge once again finished second best. Potential Force never showed out.
The lower division of the race saw Brunswick edge out Star Alone in a thrilling finish, jockey Aslam Kader riding a typically patented powerful race. Favourite Name of Love was given a dubious ride by apprentice J Chinoy. The apprentice jockey has had winners come rather too easily and unless he keeps a straight course and works hard, his progress may well be stunted.
Aslam Kader was found wanted on favourite Wikhed Idea whom he rode to the ground with a start to finish dash, appearing to be in a reckless hurry to reach the winning post. To make matters worse, he lost his whip at a crucial stage and as a result, the well-backed Sunraj who looked beat at one stage, picked up momentum in the final furlong to win with a great deal of comfort. Sunraj perhaps would relish a slightly extended trip considering his build. In the upper division of the same race, the Young Rajput plate, Baira obliged at nice odds. Pelf, who was sporting blinkers for the first time, ran green but nevertheless finished on purposefully. Favourite Coco Beach was never in the hunt.
Trap A Spy cantered home in the Pune Plate (Div I), with Juarra chasing the front-runner in vain. Agnivarsh finished third and he continues to be a disappointment. In the lower division of the race, Pradeep Annaiah’s Crystal Hill floored the opposition at fancy odds, favourite Good Hope never giving visions of a win at any stage during her futile chase of the front-runner.
Strides of Fire once again let down, going down tamely to Crystal Goblet in the Brig R C R Hill Memorial Cup and in the day’s other action, Welsh Dancer won at the expense of Secret Silver. Prince Thunder who had failed as a favourite, finished on strongly to take the third spot and had jockey Vijayan not got into a mess, he could well have caused a big upset.