Acrobat edges out Bold Chieftain in a thriller 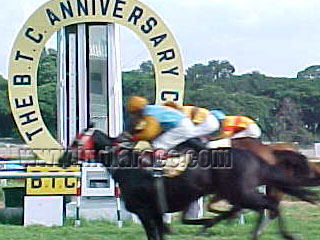 Acrobat (Aslam Kader up) , winning the B T C Anniversary Cup from Bold Chieftan (B.Praksh up)

In one of the most thrilling finishes seen this season, Acrobat won the BTC Anniversary Cup from Bold Chieftan and Ancheta on Saturday. Jockey Prakash failed to deliver the goods on Bold Chieftan for the second time running as the power-packed finish of Aslam Kader and his blatant flouting of the regulation with regard to the use of the whip saw Acrobat painfully bringing out all the reserves of energy to snatch the verdict virtually in the last stride.
The rich terms race for four-year olds and over had a competitive field in fray. Adamile, who had finished an eye-catching second to Bold Chieftan in her last essay, was well placed in scales and was expected to prevail in this extended trip. Erstwhile classic winner Acrobat who was showing signs of returning to form was the most favoured as per the terms of the race but the got-abroad gelding did not have any recent worthwhile performance to back his claims though his last run was suggestive as he was completely chopped off at crucial stages of the race. Bold Chieftan, who is in great nick, was expected to defy the top-weight.
Bottom-weighted Ancheta bolted to the front and set a scorching pace even as Bold Chieftan was settled in mid-group, with Acrobat gracing the rear. Ancheta had a break of over three lengths at the top of the straight and shaped to pull off a big upset but Bold Chieftan came through the middle with a sustained burst of speed. Aslam Kader had to maneuver his way from behind and had Acrobat going on the wide outside with free use of the whip. Prakash who has been enjoying tremendous success is no powerhouse finisher and though Bold Chieftan managed to head Ancheta, Acrobat had sailed past the top-weight to post a thrilling win. Adamile continues to be inconsistent.
Aslam Kader was pulled up for the excessive use of the whip and this being his fourth offense of the season, he has been deprived the use of the whip for the remainder of the season. He had earlier been suspended for two days for a similar offense. It is pretty depressing as to how seasoned jockeys like Aslam Kader are unmindful of the rules. It is not that he is not aware of it but he appears to care a damn, as the punishment is not harsh enough. There is a clear-cut rule as to the number of times a whip can be used on the horses and the jockeys are duty bound to follow the rule and not flout it repeatedly. One cannot justify excessive use of the whip on the grounds that it helped the horse to win. Every sport has rules and regulations that may seem unfair at times and jockeys cannot claim to be immune to this and senior jockeys like Aslam Kader have to set an example.
Name And Fame hammered the opposition in the 1400 metres M Arshad Ali Khan Memorial Cup, the other highlight of the day in impressive fashion. The race named after the erstwhile Secretary of the Bangalore Turf Club, appeared to be at the mercy of Name And Fame. Name And Fame assumed control inside the final furlong, quickened nicely to contain the challenge of Obligado with a great deal of comfort. Obligado’s run must be considered pretty impressive because the son of Indictment was running after a pretty long lay off and for the first time during the season. Sea Legend ran a poor race.
Trainer Dominic’s Fast Trick who had impressive credentials to recommend her claims in the1200 metres Sir Bruce Plate (Div I) won with a great deal of comfort from Southern Goddess who chased the winner in vain. Southern Goddess was running after a setback in training and her performance was pretty encouraging. The lower division of the race saw Amazing Career win as he pleased.
Set Aside had served notice of an imminent win when running an easy second behind Fantasy Bay in her last run. With Pesi Shroff in the saddle, the chances became rosier. Shroff kept Set Aside in the rear of the field and the daughter of Steinbeck burst through the middle to sail past the front-running Pettalumma to win the R M Puttanna Memorial Cup (Div I) with a great deal of ease. Pettalumma was running after a setback in training and this run should help the filly turn in a better performance next time out. The lower division of the race saw favourite Star Cavalier manage to edge out unfancied Fugleman but not before jockey Prakash had expended all his energy.
There was a flood of money on Beauty Mission that resulted in odds on favourite Scarlet Runner drifting out considerably. In the event, Beauty Mission ran like a dud to finish in the rear of the field while Scarlet Runner who ran prominently in front, won without much fuss.