The Pelican proves too good 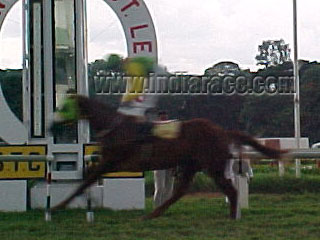 Easily the best four-year old currently in training in the country, The Pelican made mincemeat of a worn out opposition to win the Gr 2 Bangalore St Leger, the last classic of the Bangalore Summer Season, in splendid fashion on Sunday.
The Pelican had finished an eye-catching second in the Maharaja’s Cup despite conceding weight to his main adversaries last fortnight. Sharpened by that run, The Pelican looked invincible as he was taking on the opposition at level terms. There were many who believed that Tapatio could pose a threat considering the improvement he had shown during the season. But the son of Twist And Turn, Tapatio appeared to be jaded, perhaps some problem bothering him as he refused to come out of the gates and had to be goaded to walk out. Tapatio raced behind the tail-swishing Pleasure Hunt and was hampered when the latter abruptly grounded to a halt approaching the 1800 metres marker. While Pleasure Hunt did not complete the grueling 2800 metres trip, Tapatio was a spent force long before the runners took the final bend and finished a dismal fourth out of five who finished the race.
Star of the Crop set the pace as the starter dispatched the field for the longest race of the season, with The Pelican and Arterial racing in close attendance. The Pelican smoothly sailed past the front-running Star of the Crop approaching the final bend and went away for an effortless win to give jockey Y S Srinath his first success in this event. Arterial, the only other stout stayer in the race, finished second, with stablemate Star of the Crop finishing a poor third. Pleasure Hunt who had run The Pelican close in the Indian
Turf Invitation Cup at the same venue four months ago, has gone sour and doesn’t seem to be relishing racing any longer. It remains to be seen whether she will be retired to the stud or continue racing for some more time in the hope that she may come good at some point of the year.
Harish drove out It’s A Steal to a facile win in the Divine Light Plate. It’s A Steal was baulked for an opening inside the final 350 metres with Warren Singh on Fiddle Faddle immediately ranging alongside. Sensing that he was going to be hopeless pocketed, Harish forced his way, knocking out Fiddle Faddle out of the way, resorting to dangerous methods. While Fiddle Faddle lost all her chances as a result, It’s A Steal went away for an easy win over Double Eagle. Jockey Harish was suspended for three race days for dangerous riding, which must be considered light. There was no doubt that jockey Warren Singh was trying to keep his main opponent confined inside and he was perfectly justified in adopting such tactics because no jockey will move out and give away to his opponent. Harish’s forceful tactics could have caused a serious mishap. He may justify his methods as his keenness to win but such measures are fraught with danger. Keenness to win is not a justification for rough riding. Even if Harish was in Warren Singh’s place, he would have done the same but it is doubtful if other jockeys would have been as aggressive as Harish. The talented jockey needs to be careful.
Michael Eshwer trained Star of Heaven who had gone down to Triple King by a whisker, showed amazing improvement when trouncing the opposition in the D M Shivaswamy Memorial Cup (Div I). Fancied Street Smart ran a pathetic race. May be the Razeen progeny would relish a more staying trip. The sprint is not definitely the four-year old’s fort. The lower division of the race saw Puttanna’s Common Wealth record a facile win over Native Red who is yet to regain the sparkle he showed when recording his maiden win last year.
Ganapathy trained Prevalence recorded a smashing win in the 1600 metres Brindavan Garden Cup. Full sister to the celebrated Regal Equity, Prevalence burst through the middle inside the final 300 metres to sail past the front-running Florale to win comfortably. Al Humair who came in for spirited support, was involved in a blanket finish for the third spot but jockey Rajinder did not aid the cause of the Imtiaz Sait ward by traveling wide all the way into the straight.
Madhav Mangalorkar’s Special Request proved too good for the opposition in the 1400 metres Astronomic Plate (Div I). Old Meldrum managed to pip favourite Cool Camp for the runner-up spot. In the lower division of the race, Thrill of Success just about managed to edge out Burning Roma in the shadow of the post despite a hampered passage.
Mohan Valavi’s persistence finally paid off; with Agnivarsh recording a long over due win in the 2000 metres Happy Valley Plate. Favourite Selena warmed up too late and just about failed to collar the front-runner who had assumed command inside the final furlong. War Trumpet who has had his share of physical problems, led all the way, apprentice jockey Rajesh Singh keeping him wide all the way. In the straight, War Trumpet drifted out of a straight course and finished third. With better handling, War Trumpet may have finished closer to the winner.