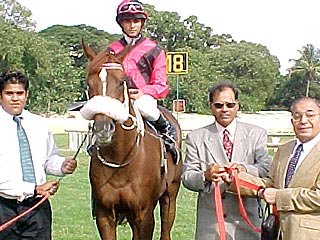 Refresher (A Imran Khan up), being led in by trainer BK Arshad and owner Mr. I S Laljee and Mr. Zakki Soomar

Refresher has been a game horse and has invariably given out his best with a high degree of consistency. It came as no surprise when the five-year old son of Be Fresh, came up with a spirited run to get the better of the front-running Whatmore in virtually the last stride to win the J B Mallaradhya Memorial Cup which featured Saturday’s races. There was a mishap in the race, with Chennai champion Abraham coming a cropper on Purple Princess, suffering a fracture in the process. Jockey Harish on favourite Iflookscouldkill was pulled up by the Stewards for being the cause of the accident and was suspended for a substantial period.
Iflookscouldkill who had surprised in the Gr 2 Maharaja’s Cup last fortnight was the favourite to win but the son of Don’t Forget Me was not his usual self. The sparkle was missing and he eventually finished in the rut. Whatmore who has found one better on several occasions, led the field from the word `go’ and shaped like a winner when he had a break of over two lengths inside the final furlong. But Refresher who shot through the centre, managed to get up in time to get the nod on the post to once again relegate Whatmore to the second spot. One-paced Self Styled failed to quicken after being positioned prominently at the top of the straight and was a tame third. Arrakis showed some improvement when running a forward race for the first time in three outings.
Lesser-fancied The Promothean, trained by Imtiaz Sait, surprised in the 1400 metres Santorini Star Plate. The race could have gone the way of favourite Gisele but for the interference caused by jockey Mrs Silva who was astride Red Zeppelin. Red Zeppelin cut across Gisele, causing a check approaching the final bend and in the straight, the former was leaning on to the favourite hampering the progress of the favourite in the process. Though Gisele finished on strongly, the favourite fell short narrowly. The trainer and owner of Gisele have reportedly lodged an official complaint to the authorities to enquire into the interference. Though it may be uncharitable to say that the interference was deliberate, the fact remains that it cost the public dear. A senior jockey had this to say about Mrs Silva’s riding: ``Her basics are all wrong. She has no control over her horses and she goes where the horse takes her. The way she rides, she cannot hope to have proper control even if she tries hard. It is akin to a batsman gripping the bat wrongly and trying to impart power to his shots. The intended effect will not be there.’’
Arjun Mangalorkar’s Royal Mission surprised in the 1800 metres Maj E Fownes Memorial Plate, a race for horses rated 30 to 45. Royal Mission was not exactly winning out of turn for the son of Green Forest was once rated among the top bracket horses as a three-year old till a tendon problem halted his progress. Now nursed back to fitness, Royal Mission ran behind pacemaker Valencia before assuming charge inside the final 300 metres. Though pressed hard by favourite Crepusculaire, Royal Mission battled on win by a narrow margin. Pretty Move showed some sparkle after disappointing runs earlier in the season, to finish an eye-catching third. Fancied Name of Love, despite being prominently placed in the homestretch faded out when it mattered the most rather too tamely for comfort.
Mumbai based trainer Subhang Singh led in his maiden winner in Bangalore when Wikhed Idea swamped the opposition in the 1100 metres Squanderer Plate, a race for maiden three-year olds. Pelf once again filled up the runner up spot, staving off the challenge of first timer Saoirse.
Amber Regent picked up momentum rather late in the Col Rajkumar C Desraj Urs Memorial Cup (Div I) but that did not deter the favourite from pipping the front-running Eau Die Vie on the post. In the lower division of the race, a similar finish saw Strombolix edge past favourite Cool Jazz in the shadow of the post. Two firm favourites obliged in successive races, with Adventurous World winning with ridiculous ease and Slovania making amends for earlier failures.