Nairn puts it across Appeaser 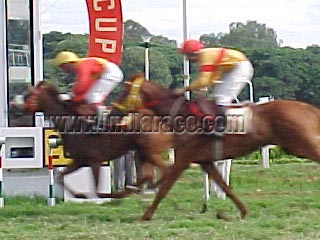 Nairn (K.P.G.Appu up), winning the Governer's Cup from Appeaser (Pesi Shroff up)

Jockey Appu rode a splendid race on Nairn to steer the daughter of Razeen to a thrilling win over Appeaser in the Gr 3 Governor’s Trophy, the star event of the concluding day’s Bangalore Summer Races on Sunday. Nairn had the weights in her favour but the four-year old filly hadn’t fared too well after winning the Bangalore Oaks in January and as such, top-weighted Appeaser was expected to overcome the handicap disadvantage. In the event, everything fell in place for Nairn for whom the slow pace of the race suited to the maximum and her superior turn of foot ensured that she stole the race away from Appeaser who was hard-pressed to bridge the gap. Nairn held on to win by half a length, with the rest of the field simply outclassed.
With most of the runners in the fray belonging to the Deepak Khaitan camp, the only realistic challenge for Appeaser was Nairn. One expected the pace of the race to be hot especially as Nairn was a suspect stayer in a true run race while Appeaser would relish every inch of the trip and more. But the pace set by Calorescene or Alameda who took turns alternately was modest. As a result, with most of the runners in the fray staying on at the final end, Pesi Shroff on Appeaser had to come on the wide outside, circling the field while Nairn slipped in along the rails. The small made Nairn is blessed with a good turn of foot and she quickened nicely even as Appeaser was beginning to gain ground. The lead that Nairn got at the top of the straight held her in good stead and Appeaser struggled to reduce the leeway as the winning post came to the rescue of the front-runner. Mr Belvedere was a faraway third. To the credit of the trainer Darashah who saddled Nairn, he had turned out the filly in excellent shape.
Trainer Michael Eshwer deserves praise for getting Firecrest to perform consistently over staying trips. The got-abroad filly Firecrest recorded her third straight to win in the 2000 metres Leading Stud Cup, a race for horses rated 30 to 45 to emerge as the horse of the season. The daughter of Southern Halo, Firecrest got up in time to get the better of the front-running Hello Brother in virtually the last stride. Hello Brother has been an enigmatic performer, reserving his best for the two Derbys that he ran in, with mediocre performances thereafter. This was the first time he showed his old sparkle but to his bad luck, he found one better in Firecrest. While Firecrest’s both wins had come with start to finish attempts, this time out jockey Appu brought his mount from well off the pace to catch the front-runner in the last stride. Thus Appu completed a grand double.
Ganapathy trained Star Cavalier came up with a spirited run inside the final furlong to win the Leading Owner Cup (Div I) from Pettalumma. Jockey C Alford who has ridden some good as well as indifferent races, set off an Arcaro as if in a reckless hurry to reach the winning post and his attempt came to grief close home as the son of Green Forest literally grinded to a halt. Pettalumma then shaped like a winner but was put paid by the finishing burst of Star Cavalier who flashed home. The lower division of the race saw Southern Treasure make a profitable start to finish essay. Favourite Fugleman was not sighted.
Dilmaangemore who had served notice of an early win by an impressive run in his debut run, fulfilled that promise to win with a measure of comfort, the Leading Bookmaker Cup (Div I), a mile race for maiden three-year olds. Spark of Love failed to quicken when it mattered the most and finished third. Princess Cut accelerated nicely in the final furlong to win the lower division of the race from Zaran who tended to hang at a crucial stage of the race. Chimango was a noteworthy third and should strike before long.
Trainer S Ganapathy and jockey B Prakash who ended up with 44 and 45 winners respectively dominated the Summer Season. Three other trainers barely managed to reach double figures, suggesting the kind of supremacy that the duo enjoyed thanks to the surfeit of horses that Dr M A M Ramaswamy owned. In the long run, such one sided domination may have adverse effect on racing.