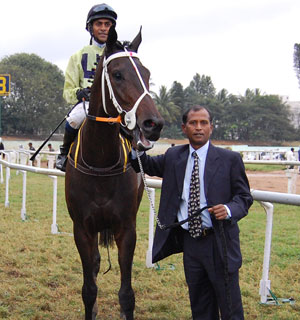 A brilliant turn of foot in the straight enabled Satish Narredu's Bourne Supreme to assert his superiority over his eleven rivals in The Jog Cup, the feature event in a card of eight races at Bangalore on Friday. Despite being eased up in the final furlong, the free-striding horse horse crossed the winning post more than seven lengths clear of the others. Preordained, Lad King and Bourne Supreme were the only youngsters in this race, and the final outcome was supposedly restricted to the three of them. Since Preordained and Lad King had been penalized for their victories in the lower class, they were conceding weight to Bourne Supreme. In the interim, Preordained had travelled to Hyderabad and flopped as a fancied runner in the 1000 Guineas at that centre. On the other hand, while giving weight to the highly talented Toroloco, Bourne Supreme had finished powerfully to run an excellent second. Based on all these performances and comparative ratings, Bourne Supreme started as an odds-on choice to lift this trophy.

The speedy Scarlette made use of her innermost draw and settled into an early lead in this race. Unable to restrain Lad King much longer, PS Chouhan eased him thereafter and took him ahead of Scarlette, Preordained and Bourne Supreme. They travelled in the same order till the top of the bend. The only thing that changed a bit was the style of their running. While Preordained and Scarlette were under pressure to hold their positions, Bourne Supreme was travelling the best of the lot. Without exercising a muscle, Suraj had moved him into second place on the wide outside. It was apparent that it was only a matter of time before Bourne Supreme would overtake the leader. It happened near the two furlong marker. Moving forward with determined strides, he sailed past a heavily punished Lad King and romped home to an easy victory. In the hands of an inexperienced apprentice, Sunstorm carried Anjar Alam into second place ahead of a tired Lad King and Preordained. It will be fair to say that Sunstorm will be tough to beat the day he runs against horses in his own age group. Bourne Supreme is likely to win on promotion.

Satish and Suraj Narredu had another winner in the concluding race of the day. It was the last opportunity for three year old maidens to run in a terms race at Bangalore. Saratoga Spring was the highest rated amongst them. Much was expected from this horse earlier in his career, but he had failed to deliver. The trainer had taken him to Pune to have a tilt at the local Derby, but an injury had forced him to miss that race. This horse was known to relish extended trips, and that was the reason why he had been campaigned on those lines. Despite running over an unfavourable sprint today, he was quoted at very short odds as it was felt that he would win on sheer class. Those amongst the punters who backed him today were worried in the initial stages of this race. After taking a good jump, Saratoga Spring began to fall back on the rails. This allowed Invincible Shot , Flying Snow and a bunch of others to crowd his path. Suraj waited patiently on the rails and made his move only in the straight. He was lucky to find an unhampered passage in the final furlong. He overtook a tired Flying Snow near the distance post and managed to hold onto a narrow advantage over a fast finishing Invincible Shot. Saratoga Spring is sure to improve after this run and must be followed over a longer trip in handicap company.

The third short priced horse from this stable was Golden Viper. This expensive purchase was still a maiden and the trainer chose to run him in a handicap event today. Some brilliant track work in the company of better class stablemates was indicative of his present form and condition. The stable was satisfied with his preparation and the connections backed him down to half-money favouritism. A sudden turn of events, coupled with a total lack of concern on the part of the racing officials at The Bangalore Turf Club, led to much heartburn amongst the racing public. Golden Viper played-up after being stalled and reared up awkwardly in his gate. He flung Suraj off his back, landed awkwardly on the rear gate and fell flat on the ground. It took a few moments for both horse and jockey to recover from their trauma. At any other racing centre in the world, this runner would have been declared a non-starter. But not at Bangalore. The learned stipes and veterinary doctors present near the starting gates forced the "handlers" to fix the loose saddle. They looked carefully at the horse to see if there were any external injuries like an open wound or some broken teeth. Finding no such evidence, they trotted the horse for a few yards and certified him "fit to race". After such a terrible fall, Golden Viper ran on expected lines and finished in the ruck. The punters lost much money and the owners had a lame horse returning to the unsaddling enclosure. All this could have been averted with some careful supervision. The Stewards at The Club need to take corrective measures to ensure that such situations are avoided in the future.

The above race was won by Nityanand's Blue Star. This victory enabled the trainer to complete a double for the afternoon, as he had already won the day's opener with Royal Music.  After a number of placed efforts in the last one year, this three year old chestnut managed to enter the winner's enclosure. Blue Star settled comfortably behind a runaway Catamaran and Will Still for the first half of their journey.Soon after entering the straight, Imran Chisty pulled him towards the centre of the track and asked him to quicken. Blue Star responded gamely by lengthening his strides and running away from a hard ridden Abracadabra and a tired Catamaran.

Imran Chisty won the very next race with Amit Caddy's Back Among Friends. This well built horse had been carefully brought down to the lower class, and was pitted against horses in his own age group. He was backed all morning to start as a firm favourite in this race. The only other horse that merited attention was Another Voice. He had incurred a sizable penalty for his victory in early December, and was running on promotion. With Western Palace tearing off to the front, Imran chose to bide his time. However, that did not last too long. Back Among Friends dragged his rider to the front and galloped away from Another Voice, The Phenomena and Tribal Queen. The winner is capable of winning a similar race in the next category.

A superb performance from Ganapathy's Southern Opinion in The AP Kothavala Memorial Cup was the highlight of the afternoon's action on Friday. The two year old defied a winning penalty and put it accross a number of talented juveniles in this race . It is rare to see this happening so early in the season. Southern Opinion looked well muscled in the paddock and ran like a seasoned campaigner. In the hands of Sreekanth, he settled comfortably behind Jersey Girl for most of their journey. The race took a serious turn only in the straight. Responding to Sreekanth's whip, Southern Opinion improved with each subsequent stride and moved steadily towards the winning post. Conceding five and a half kilos and giving a beating to an experienced youngster, was definitely a praiseworthy performance. It is learnt that Southern Opinion is now headed for Mumbai, where he will be targeted at the bigger events at that centre. He is a nice looking horse with a bright future.

The only other race in the day's card was won by the Dhariwal trained Arabian Gold. With the presence of Tiberius, this mile race was considered to be a one horse affair. The bay colt had reeled off a series of victories last winter and was one of the highest rated three year olds at Bangalore. He had been rested after his summer campaign and was tested in a mock race a few weeks ago. Being satisfied with his progress, Irfan Ghatala had chosen to run him in this race. Some racegoers were intrigued to see the body weight of Tiberius. The charts confirmed that he weighed more than twenty kilos above his previous weight. The colt ran no sort of a race today. He took off lethargically and ran similarly throughout the trip. An announcement confirmed that he had burst a blood vessel during the race. With Samuel Fargeat on board, Arabian Gold took off like a scalded cat and showed the way to Mountain Of Joy, Cafe Del Monte and No Doubt. His early advantage helped his cause, as he lasted out to win narrowly from a hard ridden Mountain Of Joy. No Doubt got up on the last stride to beat Cafe Del Monte into fourth place.