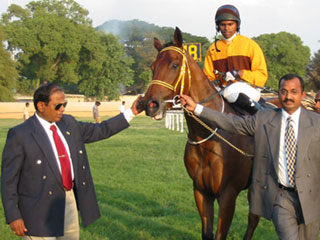 If the perception of the professionals is anything to go by, then Fond Fantasy should be the overwhelming favourite to win the Gr 2 Bangalore 1000 Guineas, the first classic of the season to be run on Saturday. Fond Fantasy had won the Gr 1 Fillies Trial Stakes during the Summer Season and the Gr 3 Mysore 1000 Guineas during the monsoon season and had finished behind stablemate Glorious Colours in the Bangalore Derby. Impeccable credentials indeed but the inescapable feeling is that the filly has not made any progress and stagnated where she was while the other contestants have made significant progress in the intervening period. Fond Fantasy’s win have been workmanlike and at Mysore, Chilli Girl stretched her to the fullest.

Though the daughter of Razeen goes into the race in pink of condition and after a well-deserved rest, Fond Fantasy has her task cut out. The formidable Ganapathy stable too has preferred to play it safe by keeping her back for the Bangalore classics in preference to the ones at Mumbai. Ganapathy feels that she is not a good traveler because when she was sent to Mumbai as a two-year old, she came back without racing there and then at Mysore, she showed a downward trend. Fond Fantasy has worked well in her preparatory workouts and she goes into the big race with a great deal of expectations from everyone associated with her. Whether she does just enough to win which makes one to suspect that others are catching up with her or not, remains to be seen. The Guineas will set to rest all such speculation and should she acquit herself well, she may well be in the line up for the 2000 Guineas.

Allies Serenade, from Darius Byramji stable, has made remarkable progress since the Summer Season. After winning the Gr 3 Dashmesh and Hargobind Stud Bangalore Million, Allies Serenade blotted her copybook with a listless performance in the Guineas at Mysore. But she came into her own in the Gr 1 Poonawalla Mysore Derby, having the measure of the opposition which included 2000 Guineas winner Son of the Light and Chilli Girl with a fair degree of comfort. Always rated high even when she was stabled elsewhere, Allies Serenade should go into the race as a strongly fancied runner because she can only be expected to improve unless she lapses into her inexplicable ways. All things considered, Allies Serenade, which will have the help of Malesh Narredu, should have a bold show.

Padmanabhan trained Ramjet has made good progress after skipping the monsoon season. Ramjet was less than two lengths behind Fond Fantasy in the Gr 1 Fillies Trial Stakes and considering the manner in which she had the measure of the highly rated Lancaster in her lead up race, Ramjet is the one to look for to cause an upset. The daughter of Placerville is working well and in good condition. Frenchman Ronen Thomas who has created a favourable impression, will be astride Ramjet and the filly should not be wanting when it comes to support from the saddle.

Among the others in the fray, Self Decision is the one who runs with a fair chance of causing a flutter. The daughter of Local Talent, Self Decision won earlier during the season, which suggested of great deal of improvement over her Summer form. Self-Decision should figure at the finish if she continues to show an upward trend in her performance graph. Conqueress, Metalique, Chapmans Peak, Highness and Breno make up the rest of the challenge but it is hard to visualize any of them upsetting the fancied runners.

Allies Serenade, Ramjet and Fond Fantasy. The race could go any way.