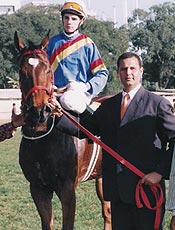 Top Gun (R.Thomas up) winner of The Bangalore Turf Club Trophy being led in by trainer M.Eshwer

Trainer Michael Eshwer had things falling into place on Saturday, saddling a quadruple while visiting Frenchman Ronen Thomas did his confidence a world of good by booting home three winners through Top Gun, Betfair and Starcent. It was a particularly satisfying day for Thomas who established his credentials quite emphatically and in the process, gave sufficient indication that he is a quick learner and capable of adapting to the nuances of Indian racing.
The Bangalore Turf Club Trophy had just five runners but all of them had impeccable credentials and as such, a thrilling race was in place. Sprinters Cup winner Bryce Canyon and three-year old filly One Magic Moment enjoyed favouritism while Top Gun who was the highest rated horse in the field having won twice during the monsoon season at Hyderabad and Mysore was quoted at liberal odds. Thomas took Top Gun on a start to finish mission, with stablemate Bryce Canyon on his outside and One Magic Moment in the third spot along the rails, ridden in restraint by jockey Kamlesh. Rounding the bend, Top Gun picked up momentum even as Kamlesh on One Magic Moment was frantically hoping for a gap to open up between Top Gun and Bryce Canyon. Though Bryce Canyon was not quickening in any decisive manner, jockey Malesh Narredu was not inclined to do any favours to One Magic Moment by shifting out. Only when Bryce Canyon tired out and fell behind, One Magic Moment could slip through but by that Top Gun had established a winning lead. The daughter of Tirol flew home, to be shy by half a length. Slanka threatened briefly with a flourishing run on the wide outside but failed to sustain. The luck of the race surely went against One Magic Moment who could have turned the tables on Top Gun if she had a smooth run in the straight. However, One Magic Moment, by this brilliant performance, has laid claims to being a prospect for the Sprinters Cup. Saratoga Sizzle for completely out of sorts.
The well-bred Starcent (Placerville-Mystic Memory) had a poor set of opposition to tackle in the Huthari Festival Plate and the three-year old filly won as she placed. Thomas encountered rough passage on the favourite as Starcent was pushed around but he managed to keep her handy. When asked for an effort inside the final two furlongs, Starcent quickened in the manner of a good type of a youngster to win as she pleased. Since longer trips suit the filly fine, the trainer still has time to target her for the Oaks.
Betfair won the Rohini Cup over nine furlongs at the expense of Perfect Ten. The blinkers seemed to have done a world of good to Betfair. Thomas on Betfair let Perfect Ten do the entire front running and then alerted the filly in the final furlong. Betfair responded gamely to flash past the favourite quite capably close home. Jumping For Joy, who was one of the fancied runners, could have finished closer but jockey Badel elected to push her along the rails where there was insufficient gap.
Merango formed part of the four winners saddled by Eshwer. Merango was knocking on the doors of success, provided his new owners, the Nayaks, with a well fancied win in the Parafait Amour Plate (Div I). Appu had Merango handily placed and after a brief tussle with Zimmerman, the favourite went clear. Just Amazing had run behind some good horses like Centralito and Conqueress and as such, the daughter of Green Forest looked a cut above the rest in the lower division of the race. The favourite did manage to win but found the sprint to be sharp for her liking. She had to be driven out to win from Astigmatic who had stolen a march at the top of the straight. Son of Fortune, who had run behind Millennium Magic at Mysore, put up a dismal show.

The Kunigal Stud Farm maintained its stranglehold in the races meant for two-year olds when Corsican Gal just about got up in time to pip Laguna Blue in the one of the closest finishes seen this season. Corsican Gal was the firm favourite, with Stilton and Grand Ceremony having their own share of supporters. It was Laguna Blue who showed speed and did the entire front running and shaped like a winner, as Corsican Gal was none too well placed inside the final furlong. However, Corsican Gal finished with a rattle to get the nod on the post. Stilton was third while Grand Ceremony did not pick up momentum at any stage of the race. Corsican Gal is a good type of a juvenile.

Alannah received inspired support in the A R Keshava Mudaliar Memorial Plate but the daughter of Pennine Ridge failed to sustain her front-running tactics and packed up long before the race took a serious turn. Bajo Grande who was handily placed, assumed charge round the final bend but buckled close home to failed favourite Titanium who appreciated the step up in distance to win, with a sustained gallop in the homestretch.