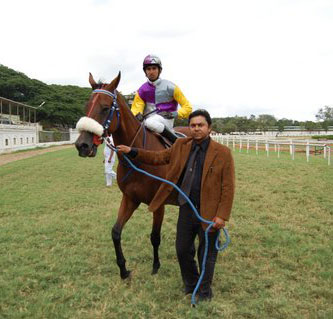 Vishal Yadav trained Demanding Format (Hymn-Flaming Bay) won her second successive race, the BOL Publication Cup, which featured the nine races card on Monday. The 4 year old filly defied the 12 points penalty to surge ahead with 300 left from home and quickly took a lead of a little over two lengths over the nearest challenger Lotus Pond. Vigoroso came up with a strong run inside the last 150 metres and inched closer with every stride but fell short by a short head at the wire. Lotus Pond finished third while Legal Knight who had won all her three starts so far, found the contest in the top set a bit tough and ended up fourth after raising some hope on top of the straight.

Bottom weighted Faustian (Bee’s Prospector-Dancing Steps) from C.V.G.K.Kishore’s stables found the mile trip to his liking and scored a facile win in the Red Chieftan Plate. After jumping out well from the gates, Faustian was positioned prominently in third and moved around the front runners to hit the front near the distance marker. Scimitar made rapid progress to finish second, while Behram and Dare Don filled the frame.

Dinesh Pujar trained The Gain (Sir Bordeaux-Game Plan) carried the top weight on its back to a pillar to post victory, in the lower division of the Kokkare Belluru Plate. Jockey D.K.Ashish was quick to take The Gain to the front at start and kicked on when the well backed Preset
was pressed strongly in the final furlong. Youre Kiss’s Due came in late to deny the second place to Preset in the closing stages of the race.

C.D.Monnappa’s ward, Sterling Speed (Sir Bordeaux-Royal Tour) was backed to favouritism in the higher division and she justified the support. Jockey Vaideeswaran settled Sterling Speed in third early and shot through to take charge on top of the straight, to score a facile victory. Prezzie improved late to take the second spot ahead of Ahira.

It was another flying finish in the Narmada Plate, the concluding race of the day, which earned a winning point to Madhu Babu on J.Saravanan trained Showhorse (Flitch-Accademia). A strongly supported On Call was well on course after taking charge from Huckleberry Finn in the last 100 metres but the grey, Show Horse gathered speed in the dying moments to shoot ahead by three parts of a length in the shadow of the winning post.

Saravanan was the only trainer to have saddled a double on the day. He had led in a well crafted gamble through Sunshower (Pennine Ridge-Sober Mind), in the lower division of the Sindhu Plate. Jockey K.P.G.Appu took Sunshower to lead the field from the word ‘go’ and made every post a winning one. Suryaputra and Marienella drew closer on the final stretch but Sunshower kicked on and the two finished second and third respectively.

Virat, who was sent into the race as a favourite in the Golden Fantasy Plate, the first race of the day was withdrawn, after he dislodged the rider and bolted. The reduced field of nine runners took the start and Micheal Eshwer’s ward Jazzbythebay (Royal Kingdom-Jazzego) earned her maiden win by a comfortable margin. Little Athena and Always Inspiring who entered the home stretch together finished second and third respectively.

Ranjeet Shinde trained Sun Device (Black Cash-Sangam) raptured from the rear with a sizzling gallop to collar Winning Tale close home. Winning Tale found a wide gap along the inner rails and went past the front running Perfect Analysis. Sun Device who was travelling third last till the top of the straight, moved rapidly on the extreme outside and put its neck at the right moment to beat Winning Tale.