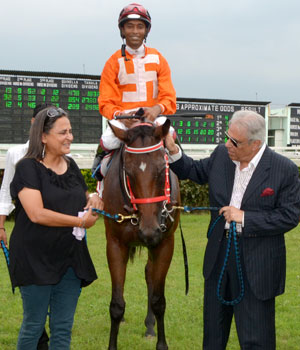 Derby Day at RCTC turned out to be an utter anti-climax as the premier classic had to be postponed to Tuesday due to heavy rain lashing the racecourse for over an hour between 3 and 4pm. The last two races were cancelled. However, it’s quite likely that quite a few of the horses which were to participate in the Class I affair, The Alice Springs Cup, will take part in a new race framed for the final afternoon on Wednesday – The S. Rahamatulla Memorial Cup.

The win of Arti Doctor’s Shaktiroop in the Desert Shot Cup was not unexpected as her class was indisputable after winning the Olympia Tech Park Million in March. Though Snowdrift is a highly rated youngster, it was a little too much to expect from him in only his second outing. Nevertheless, he ran a good second and will be better for it. Visiting jockey Kamlesh made every post a winning one atop the victorious filly. Top-weighted Bengal King ran a fair third despite his crushing impost.

The five horse field for The Smart Ruler cup produced a rank outsider in the form of Beyond Stars. The Patrick Quinn runner too up the running well before the turning for home and jockey Kavraj Singh kept him going despite Tasveer coming at him like a charging bull in the final furlong. The winner’s stablemate Voyager was the hot favourite but burst his blood vessels and fell back to the rear. The disappointment in the race was Stupid Cupid.

Trainer Manvendra Singh was the sole professional to notch up a brace with Aaronic and Seafarer. The former won the upper division of the Steal The Glory Cup despite losing some ground at the start and running after fourteen months. Amazing preparation did the trick for this promising schooler. Christopher Alford did duty atop this Khaitan property. The rest of the fancied runners were a complete flop and it was left to Yamlapagladeewana to fill up the runner-up berth.

Jockey Trevor Patel rode a flawless race astride Seafarer to bag the lower division of the Gloriosa Cup. Happy to be a handy third till the straight while favourite Victorian Vice and Hamdani fought for supremacy, Trevor set Seafarer alight near the distance post and the rig responded gamely. Victorian Vice burst his blood vessels.

There were two shockers during the afternoon in the form of Vikash Jaiswal’s Gonna Be A Rockstar and Daniel David’s Irish Connection. The former won the lower division of the Steal the Glory Cup in Gajender Singh’s hands after fancied runners Stamp Act and Persian Jewels failed to put up any kind of resistance.

Irish Connection picked up the Ascriptive Cup with I. Khan astride. After the withdrawal of the ante-post favourite Stormy Wind, both Leandro and Calypso Girl were much in demand in the betting ring. The latter, a stablemate of the winner, had B. Sreekanth astride, but failed to impress nevertheless. Benefitted by a recent mock race, Irish Connection shrugged off  her recent poor form to win as she liked. It was quite a topsy-turvy result for form-workers.

The upper division of The Gloriosa Cup was the last race conducted on this afternoon. Vijay Singh-trained Altanza, the filly by Multidimensional out of Alvarada won her second consecutive race comprehensively and looks to have more successes in store in the recent future. Shailesh Shinde did the honours atop the Khaitan ward.