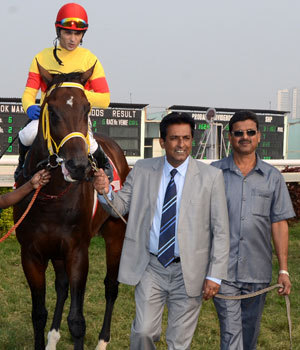 He was expected to lift the Army Cup but the manner in which he completed the job left one wondering whether he would have any peers in the country, over his pet distance of seven furlongs. The five-year-old Vijay Singh runner was never off the bridle as Christopher Alford brought him from the second last spot on the wide outside to sweep past the field in the twinkle of an eye. It was truly amazing, especially his acceleration near the distance post where he bid adios to his nearest rival Ancient Wonder who was struggling under Imran Chisty’s stick.

Crown Rule set a cracking pace, followed by Star Empire and Ancient Wonder. As he is wont to do, Alford settled down his mount near the rear of the seven-horse field. The order virtually remained the same till heads turned for home. Near the distance post, just as it seemed that Ancient Wonder would collar the front-runner, Dandified  came with a stupendous gallop.

In the Dasho Lhendup Dorji Memorial Cup, it was Rutherford’s Gentle Knowledge who left the field standing. The colt by Noverre out of Sharatila made it a one-horse race in the straight as he galloped past the pace-maker Follow The Dream in Chisty’s hands. The second favourite Bengal King ran below par to finish a poor fourth.

Trainer Shyam Habbu enjoyed a lucrative double with Stand Apart and Uniqueness, both of whom ran in the colours of Mr. Subir Dasgupta. The former ran with a crushing impost but nevertheless lifted the Gen AS Vaidya Cup with a degree of comfort after C. Alford had improved the filly’s position gradually to be in close touch with the front-running Irish Connection at the top of the straight before pulling away from the field. The huge disappointment was the hot favourite Copernicus who ran an appalling race and ended a poor fifth in Chisty’s hands.

Chisty made amends for his backers when he piloted Uniqueness to a thrilling victory over Tough One, Legends Order and Aletris. The filly by Ace out of La Unique was running for the first time after the monsoon season but was given a thorough preparation for the race by the trainer and she delivered with aplomb. Fancied runners Legends Order and Romancer did not pose much of a threat to the winner, though it must be conceded that the former ran a great race while conceding 9kg and three-years in age to the winning filly.

It turned out be an unforgettable Boxing Day for trainer Farley Rodrigues who couldn’t have received a better Christmas gift. He led in a brace with friendless Ijlal and the piping hot favourite  Style Dan. The former won the curtain-raiser by the proverbial whisker after jockey Afzal Khan was substituted by Vinay Jaiswal who brought the aged runner gradually from an outside draw (12) to land the spoils along the rails. Burst Of Stardust  (draw 13) finished a close third, but may do better with an inside draw while top-weight Modus Vivendi came with raking strides from draw 14 to occupy the runner-up berth. As it was a six-furlong sprint, one can’t help but wonder what the runners drawn nearer the rails were doing. Barring Don Magnifico, none of them ran to potential.

Style Dan (Stardan-Star N Style) made every post a winning one with Chisty in the saddle in the seven-furlong race for the Hero Worship Plate. Second favourite Elusive Moment was a non-performer.

The PP Ginwala Memorial Cup saw an edge-of-the-seat thriller as apprentice Azharuddin on Angels Quest edged out Apical Finala.  The favourite Hill Ranger ran like a damp squib after a bit of early speed.