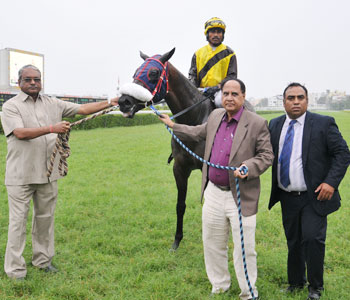 Trainer R.H.Sequeira hogged the limelight at Hyderabad on Sunday with a rare treble. Two of his youngsters, Un Un Un and Amazing Approach were runaway winners, both short priced favourites, while Gaarswood was the surprise. Followers of money were in for a shock as favourites took a back-seat with only two of them obliging in a card of six races.

Un Un Un (Duja-Serious Trouble) decimated the opposition in the Prince of Berar Trophy, that featured Sunday’s card of six races. The 3 year old bay colt who had won its last start by a distance three weeks ago as ‘money back’ favourite was once again posted at similar odds for the seven furlongs trip. The youngster headed straight to the front from an outward draw under soggy underfoot conditions. In complete command in front, Un Un Un completed an encore unchallenged, with jockey Madhu Babu getting an arm chair ride. Policy Maker and Golden Arrow finished second and third respectively, with just a ‘head’ separating them.

Gaarswood (Home Affairs-Admiration) rallied strongly from almost last to deny the favourite Mukhtar a win in the Red Satin Plate. Mukhtar took charge from Shatakshi on entering the home stretch. Pacific Star was in chase but didn’t look to be a threat to Mukhtar. Gaarswood who was almost last till the final bend started to move on the extreme outside and covering plenty of ground in the last 400 metres sped past Mukhtar close home. Yours Truly finished on to be third ahead of Yours Truly.

Amazing Approach (Win Legend-Miss Pukka) who had found one better in its two starts won the higher division of the Akkanna Plate, a 1200 metres sprint for maiden 3 year old horses by a wide margin of 7 ¼ lengths. After a good start from draw seven, Amazing Approach took over the running within the first 100 metres. Inside the last 400 metres Amazing Approach stretched out effortlessly under A.Imran Khan. Golden Storm finished on to be second while Kireeti was third many lengths behind.

The lower division was bagged by debutante Vijay Vidhata (Gaswar-Blue Sonata) from trainer Laxman Singh’s yard. In the lead on entering the last 400 metres, Vijay Vidhata started to veer out of the straight course but continued to maintain the lead over the favourite Flower Roll Up till the winning post. Rebellion rallied on to finish third.

Fashionista (Puerto Madero-Amidst) scored a stunning upset in the Goa Plate to give her trainer K.V.Srinivas his first win of the season. Mount Titlis set off on a start to finish bid in its customary fashion. The favourite Roma Rouge was in chase right from the start while Perceptions began to fade out much before the last 600 metres. Inside the last 250 metres Mount Titlis was still kicking on with Roma Rouge failing to catch up. Fashionista moved to be third and the rider looked to be content in being there despite his mount showing eagerness to raise a gallop. The bay filly however brought the rider with her to head past Mount Titlis in the closing stages to score an upset in the first leg of the jackpot pool. Roma Rouge finished third.