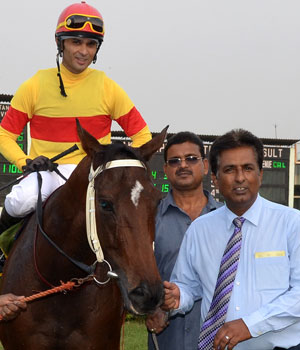 Monsoon form more or less held good at the Calcutta racecourse on the opening afternoon as those who had run prominently during the rainy season or won a race or two in that period came out and won on this occasion. The exception to the rule was Manvendra Singh’s Heirloom (Princely Heir-Hauhawunai/ Dashmesh Stud) who used two mock races near the end of the season to good effect. That, and the superb horsemanship of Trevor Patel who seems to have taken to the difficult Calcutta track like fish to water. His perception of the layout and timing (just where to accelerate from in the short Calcutta straight), has improved considerably. Some of the local lads would do well to learn from him while riding a waiting race.

To show that Heirloom’s victory was not a one-off ride, Trevor completed a brace for Manvendra and himself with another spectacular ride astride Cohiba (Sligo Bay – Dancer’s Fan) in the Safari Handicap. Using the colt’s short burst of speed to maximum effect, Trevor released the brakes well into the straight after Grand Design had taken over the running from Magical Ability and Iron Lady. A couple of cracks from his whalebone saw him sail past Grand Design for a comfortable victory.

There was no such fireworks from local winter champion Christopher Alford, who was returning from injury and completed just another day at the office with a couple of chanceless rides. Alford’s first winner for the Vijay Singh stable was the colt Aculeus ( China Visit-Husun/ Usha Stud). He let the bay settle down in only the second run of his career and  guided him through a gap between second favourite Praise Her Gaze and another runner before switching his whiphand and ensuring he does not drift to the outer rails – a fault that seems to bug the leading stable’s runners for which he received a warning from the Stipes on the penultimate day of the monsoon meeting.

Trainer Vijay Singh commenced his treble with Alarbus (Mr Mellon-Associate/ Ruia Stud) who won the lower division of The San Francisco Handicap in the hands of whipless apprentice Munna Alam. The lad is probably one of the best among his contemporaries and rode a fine race to peg back Head Hunter close home.

Christopher Alford rounded off Vijay’s treble with Free Energy (Phoenix Tower-Freefall/ Manjri Stud) who lifted the Bahrain Cup with plenty of energy left in store. The gelding collared the runaway Slade Valley at the top of the straight and drew away from the field without too much exertion from the saddle. Santos was somewhat disappointing as top-weight Bengal King pipped him for the runner-up berth.

Apprentice rider Rajinder Singh pulled off a major gamble for the connections of trainer Jasbir Singh as he made every post a winning one with Aithops in the upper division of The San Francisco Handicap. He took the big made colt by Dancing Forever out of Courbette  (Hazara Stud) to the helm of affairs as the gates opened and never looked back. It was to the lad’s credit that he rode the top-weight out hands and heels in the straight to stave off a strong challenge from hard-ridden Burst Of Stardust who has been extremely consistent but inevitably found one better.

The curtain came down on the opening afternoon’s proceedings with yet another gamble materialising. Shafiq Khan-trained Meekathara was backed down to favouritism in The Kiltoi Handicap and the speedster by El Johar out of Hava Nagila (Mukteshwar Stud) did not disappoint. Top-weight rider Mahesh rode a smart race in that he initially opted for the  rails from the eighth draw and allowed Analyst to call the shots till the straight. The latter folded up when challenged by the favourite who drew away under Mahesh’s whip. A lot of money came on Astatki but she failed to impress and may have reached the end of her tether.