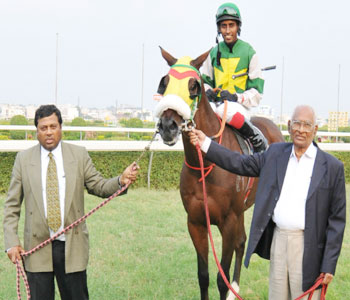 Monday’s races went off well for followers of favourites with six top market fancies and two well supported horses returning victorious in a card of nine races. Trainer Laxman Singh and jockey Deep Shanker were the professionals to score a brace each.

L.D’Silva trained Golden Essence (Roi Maudit-Essence)who has been a consistent performer, having finished in the money eleven times from fourteen starts slammed the higher division of the Mir Fazilath Hussain Memorial Cup at Hyderabad on Monday. As the field of eight set out for the seven furlongs trip, Dad’s Dollar led them with Aware racing a close second. Golden Essence had settled well along the fence in third followed by the rest. As they turned for home Dad’s Dollar tried to keep going but jockey D.K.Ashish brought Golden Essence between the leader and Aware and with a fluent gallop moved to the front with a furlong left and drew away. Dad’s Dollar settled for second place while Aware ran on to be third.

Ivanova (Equitable-Glare) from Laxman Singh’s yard wrapped off the lower division easily. The chestnut filly raced a handy fourth with Montauk calling the shots from the start. As they started t round the bend, Ivanova began to get up from around the front runners and inside the last 400 metres sped past with a resolute gallop. Amazing Approach warmed up late to come from behind to finish second in front of Montauk. Lips Locking filled the frame.

Trainer S.S.Faisal Hassan’s Khosgel (Gaswar-Invitation Only) scored a runaway victory at nourishing odds in the Rishi Konda Cup. The favourite Crown Royal set off on a start to finish bid and came in with a good lead into the home stretch. Khosgel in about fourth position approaching the bend improved to be third on top of the straight and when apprentice Akshay Kumar asked the filly for an effort she responded readily to surge past the favourite and stretch out easily to win by a big margin of seven lengths. Crown Royal just managed to hold on to the second place from Upon A Star.

Laxman Singh trained Vijays Victory (Placerville-Dementieva) justified the favouritism in the Cabaret Plate literarily unchallenged. Jockey Deep Shanker took the gelding on a pillar to post mission and found no worthy challenger close by on the straight. Silver Cruise, Khalis Gold and Maid For Love filled the judge’s frame in that order. The second in demand Kohinoor Thunder after tracking Vijays Victory for about a furlong and a half started to fall back gradually with jockey S.John making no effort and finished miles behind last. John dismounted after passing the winning post and walked back Kohinoor Thunder to the unsaddling enclosure. On being questioned by the stewards John reported that he felt something amiss with his mount and thereby stopped riding. On immediate examination by the veterinary doctors Kohinoor Thunder was observed to be fit. The Stewards after the last race of the day asked jockey Ravinder Singh to take Kohinoor Thunder on a gallop in the presence of S.John and the bay colt completed the task effortlessly. An enquiry has been opened into the incident and jockey S.John may be heading for trouble if his contention does not hold water.

Jockey S.John was again in the news in the very next race, the Soviet Star Plate. Ein Ein Ein jumped out riderless as the raced started with S.John standing on the frames of the gates. Anupam Sharma trained  Military Belle (Oath-She’s Hip) chased the leader Amazing Weapon till the top of the straight and surged ahead to score an encore in fine fashion. True Scholar finished third. Following a steward’s enquiry into the start of the race, Ein Ein Ein was declared as a non-starter and all investments made on the horse were refunded.

Jockey P.S.Chouhan’s solitary win for the day came in the ‘Juveniles’ 1000 metres dash, the Time And Place Plate. Astride M.Srinivas Reddy trained Rock Baby Rock (Roi Maudit-Reminiscent) Chouhan improved the first timer quickly to join the leader Golden Angel. Inside the straight the two drew clear of the rest and Rock Baby Rock despite leaning right scuttled with 100 metres left to win by a comfortable margin. Tokyo Bloom charged in late to beat Golden Bloom for the runner-up berth.

Faiyaz Shaikh trained Marquise was ridden by apprentice S.Sai Kiran to victory in the higher division of the Elusive Hero Plate. Disputing the lead with Yours Truly, Marquise surged forward on top of the straight to move away by two lengths. The 5 year old began to drift left inside the last 400 metres. Yours Truly fought back towards the inside and Komo Komo Komo also came charging between them. Apprentice S.Sai Kiran kept pushing hard and Marquise held on to scrape through from Komo Komo Komo and Yours Truly.

Torremolinos (Alnashr Alwasheek-Encouragement) from M.V.Narayana Rao’s stables scored an encore in the higher division of the Bakranangal Plate, the opener of the day. The filly improved well to challenge the leader Blue Eyed Babe inside the last 300 metres and forged ahead to win by a good margin. Blue Eyed Babe, Always Together and Rapidest filled the judge’s frame in that order.