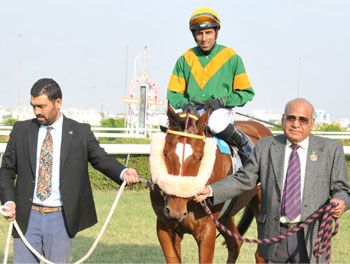 Anupam Sharma trained Military Cross (Eljohar-Star Divine / Mukteshwar Stud) made every post a winning one in the 1 Eme Centre Rolling Trophy, Div.I, the main event of Sunday’s races at Hyferabad. The 5 year old with jockey Imran Chisty assigned the task of guiding its fortunes was installed as the favourite at 3-1 among the 13 runners. As the gates opened Aware reared up and jumped out riderless. The other dozen horses were off to a level start and Chisty lost no time in driving Military Cross ahead to lead them. Military Cross continued to dictate terms on the straight and came home a clear winner even as Rajkumar made a futile bid. Ocean Side and Arudra finished third and fourth respectively.

The well backed Noble Citizen (Glory Of Dancer-Dance Diva / Sans Craintes Stud) from trainer Laxman Singh’s stables scored an encore in the lower division. Jockey Kuldeep Singh held Noble Citizen in about sixth or seventh till entering the home straight while the speedy Shatakshi led the pack in her usual fashion. Inside the last 300 metres Noble Citizen made a quick move from the outside and in no time flashed past to wrap it up easily. In Reality improved well to take the second place. Par Excellence was third and Prince Of Arabia fourth.

Laxman Singh and Kuldeep Sing had earlier scored an upset win through Policy Maker (Home Affairs-Admiration / Mebajeona Stud) in the R.Raghupathi Reddy Memorial Cup, a mile race for horses in the highest category. Policy Maker led from the start and was ahead by almost three length of its half a dozen opponents as they came onto the straight. Aventus was in chase and Machiavellianism closed up but Policy Maker was in a galloping mood and kept kicking on. Always Bullish finished fourth.

Jockey P.S. Chouhan rode a double in the first two races of the day through Kolors and Scooby Dooby Doo, both short priced favourites. L.V.R.Deshmukh’s trainee Kolors (Phoenix Tower-Krasnaya / Manjri Stud) won the opener of the day, the Star Of Gwalior Cup. Youngest of the field at 3 years, Kolors was the quickest at start and went to the front. Kolors was on a tight rein inside the last 200 metres even as Sherman Oaks, Rosemonde and Power Planet got the taste of the whip. M.Srinivas Reddy trained Scooby Dooby Doo (Roi Maudit-Flaming Ruby) scored a maiden win in the lower division of the Loveable Princess Plate. The youngster was settled in about fifth early with Good Confidence at the helm. Inside the last two furlongs Magna Carta surged ahead to take over the running and Scooby Dooby Doo also made a quick move. The gelding picked up momentum when Chouhan gave a couple of cracks and then galloped impressively to down Magna Carta by half a length. Good Confidence rallied on to finish third.

Debutante Born To Do It (Varenar-Semper Eadem) from S.S.Faisal Hassan’s yard came good in the higher division. The youngster who took a good jump from the outer most draw was moved quickly towards the inside to track the leader Ruby’s Gift. The two raced together till entering the home stretch and then Born To Do It forged ahead easily and won well. George Cross beat Ruby’s Gift for the second place.

D.Netto trained Sterling Finish (Tejano-Camarioca / Kunigal Stud) won the Cyndy Plate. The 8-1 shot was handily placed in third behind the leader Time To Smile and Flower Of Timba. Inside the last 400 metres Sterling Finish made her move between the two in front and was ridden out by Deepak Singh. After a short duel with Time For Smile, Sterling Finish surged ahead to pull it off by three parts of a length. Amazing Power rallied on to finish third ahead of Flower Of Timba.

K.S.V.Prasad Raju trained Ashwini (Stern Opinion-Stroke Of Luck) won the lower division from start to finish. The filly rushed to take the lead as the gates opened and brought the field into view on the straight. Sivangi was in chase right through the straight but Ashwini held on to the lead by a length at the finish. Noble Heights finished third in front of Fashionista.