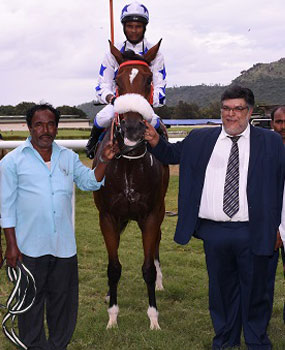 La Dona (Multidimensional – Forest Treasure/Usha Stud) justified the cramped odds as she scored an emphatic victory over her rivals to claim the Srikantadatta Narasimharaajawadiyar Memorial Million, the feature of the second day of the Mysore season.

The on-money favorite got straight down to business as he sailed into the lead soon on start. Kingoftheworld was overtaken by Krieger who quickly moved to second with Bold March not too far behind.

Jockey A Sandesh surged ahead with La Dona soon on entering the straight and the Darius Byramji ward accelerated fluently to stretch away from her opponents and only got stronger at the business end. She won drawing away piling up a huge lead to win handsomely. Kingoftheworld ran on to grab the runner-up berth. Escala was the one to have most progress in the homestretch and did very well to beat Bold March for the third.

Kingston Town (Oath – Winfoot/Pratap Stud) had been placing consistently towards the end of Bangalore season and he chose the moment and form to pick up his first success this year by winning the Star of Mysore Trophy.

Kingston Town had to earn his victory the hard way as Hillsboro, at one stage, had threatened to run away with the race. Hillsboro had led right from the start and had a handy lead coming into the straight. Favorite Striking View after chasing the leader into the straight, petered out dismally without raising any hope. King Julien and Kingston Town took a while to warm which is when it looked that Hillsboro just might outlast them. That was not to be as both Kingston Town and King Julien finished on with a good burst of speed. While Kingston Town sustained his momentum and managed to edge out Hillsboro, King Julien’s efforts were not enough to beat Hillsboro and he had to be content with the third spot.

Star Nijinsky (Multidimensional – Allaire, Usha Stud) picked up the other trophy race in the day with a determined effort and the skills of jockey TS Jodha. The Hidayat Khan trained filly was not in the best of positions at the turn making his running along the rails with horses in front.

As they turned for home, Tornada who had led all the way, kept it going and bounded forward to build a slight cushion for himself. Secret Dimension was taking time to build up his momentum when Star Nijinsky started to probe his way between horses. Jockey TS Jodha had to switch lanes more than once before getting the clear passage and once he did, Star Nijinsky arrived with a scorching gallop to shut out her opponents with less than a furlong to go. Secret Dimension got into the top gear a shade too late and did cover a lot of ground briskly in the final 100, but by then, jockey TS Jodha had already sensed victory and had eased Star Nijinsky to cruise mode.

Trainer PC Tejaswi and jockey S John combined to score a double. They first struck with Scaramouche (Placerville – Lecce/ Exhilaration Stud) who gave his younger rivals a sound beating although the verdict shows just a neck. He sprung from the gates and led briefly until Young gallant sped past him to lead the field until into the straight. Ice Splendour shot into the lead soon on turning for home with Scaramouche along the inside. Ephialties was right with them but failed to quicken. Ice Splendour shaped u well until Scaramouche arrived with a big finish to wrest back the issue and win it by a neck. Beautiful Effect improved well in the final stages of the race and got past Ephalties to finish in the money.

Tejaswi and John rounded off the day with another blistering win in the day’s concluding race with Port Blair (Noverre – Shanley / Sohna Stud) and jockey S John did his bit to exhibit his top form and riding skills to carve out a well-ridden win.

John first settled his mount well as the others rushed for the lead, with Triumphant taking over from Society Music, Sans Frontiers and Tulip running in a huddle. Port Blair clung to the rails as they hit the turn. Society Music grabbed the initiative soon on straightening up with Port Blair ready to pounce had he got the opening at that stage. Grand Turismo slipped through the inner rails and was galloping in a hurry towards the winning post. Society Music shifted out and Port Blair had to shift course to make a run for it. John urged his mount and Port Blair produced fine acceleration to zip past Grand Turismo and score to the thrill of his large number of supporters. Society Music hung for the third warding off Demanding Format.

Ontime (Ace – Timely one/Poona Stud) obliged his supporters and also brought about his maiden victory with a solid effort to score by a length to spare over Ice Brown who fought hard all the way. Ontime took charge early in the straight and Ice Brown had a clear run along the rails. The two shot ahead of the rest approaching the distance post and were involved in a long drawn tussle. Jockey M Madhu Babu rode his heart out to force a victory close home. The winner was trained by T Natraj. Kir Royale progressed to take the third spot, without bother the top two.

Another trainer-jockey pair that returned a double was that of Loknath and apprentice Darshan. They first paired together in the opening race of the day with Daenerys (Arazan – Timely One/ Poona Stud) scoring an upset victory. Daenerys slipped in from the rails to get past a slightly erratic Flying Prince and once Daenerys got to the front, he never looked back. He galloped strongly all the way to the wire. He consolidated his lead in the final furlong and had enough momentum going to hold the fast finishing El Matador at bay and earn himself his maiden victory in his seventh start. Flying Prince ended a decent third.

Darshan had a bigger and longer battle later in the day that went all the way to the Stewards’ room. Cool Springs and Hidden Hero with were involved in a fight to the finish once they shook off rivals in the straight. They waged a ding-dong battle and both were shifting under pressure as well. At the wire, It was Hidden Hero who won it, but Cool Springs’ jockey tried to chance it by lodging an objection against the winner. The Stewards however, saw no merit in the objection and overruled it in quick time to stay the judge’s placing.

Bryant Park (Hurricane State – Aryanoush/Hargobind Stud) was another outsider who beat a younger lot including the four-year-old favorite Atlantis who finished poorly. Bryant Park, trained by Vishal Yadav and ridden by Santosh Kumar, darted into the lead with Color Me alongside and these two ran away with the race as early as at the bend. No third opponent got close to these two as they battled hard through the length of the homestretch. Color Me never let Bryant park out of range, but neither did she produce that extra bit to get past. Bryant Park warded off the challenger and pulled ahead to score by one length. Anmol Hira saved the place money.