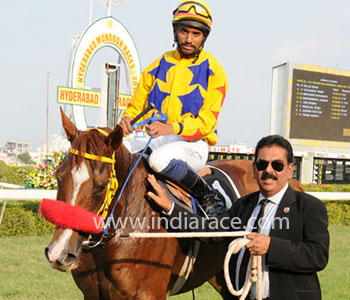 Exclusive Wind (Ravel – Calliope) made light of the top weight he was carrying to take command in the straight and then sustain the momentum with a determined effort to ward off the challengers and come up trumps to win the Deccan Chronicle Cup.

Magical Skill skipped ahead soon on start and lead them all the way into the straight. However, he ran out of gas and soon Exclusive Wind who was racing in second all the time, surged past Magical skill to take charge. Phenomenal Cruise was trying hard to catch up but could not muster enough speed. Destined Dynamite warmed up far too late and made a last ditch effort. He was covering ground briskly in the final 100, but by then jockey BR Kumar had the race well sewn up and Exclusive Wind, from the yard of trainer Kishore, dashed past the winning post with Destined Dynamite breathing down his neck.

Surprise Party (Noverre – Bridgeofsighs) pulled off a clinical start to finish victory to claim the Teegala Sulochana Reddy Memorial Cup in style. Jockey Nakhat Singh got Surprise Party to a fiery start and darted ahead to lead them all the way into the homestretch. Bayrd was off tardily and lost a little ground. Instead of nursing the favourite to make up the lost ground, jockey Kiran Naidu pushed and prodded Bayrd, which may have upset the rhythm of the dark bay gelding. Surprise Party galloped on merrily entering the straight with a handy lead.

Bayrd had moved up to the fourth spot by then and didn’t look threatening at all even as they approached the distance post. Surprise Party was a good two lengths ahead and galloping relentlessly when San Vinto and Somerset arrived with a fast gallop. Neither could topple the winner, however, Somerset was the fastest in the last 100 meters and managed to snatch the runner up berth from San Vinto.

Charlie Brown (Mull of Kintyre – Ocean Crest) won the first race of the day with a strong finishing effort towards the latter half of the straight. Columbus tried the runaway tactics and it nearly worked for him. He led from the start and well into the straight with Charlie Brown in second and the rest following some distance away.

Columbus fought on bravely even as Charlie Brown got alongside and even headed him at the distance post. Columbus did not give up and resisted ably fighting hard to stay in contention. This pair matched stride for stride with Charlie Brown only slightly ahead. However, the jockey Koushik, astride the Robin Reddy trainee, rode out with all his might to ensure victory with a narrow margin. Columbus was gallant in defeat and was a worthy runner-up.

Buddy Brothers (Mull of Kintyre – Just Julie) justified the strong support he got in the betting ring and thumped the opposition to bring about an authoritative victory.

Prasad Raju trained Buddy Brothers was out early dashing to the front with Royal Dancer for company, the rest following close behind. However, Buddy Brothers moved ahead around the turn and entered the straight with a good lead. He then accelerated fluently and by midway up the straight looked the winner as the rest were not up to it at all. Jockey N Rawal won easing up well clear of his opponents. Tough Sussex ran on to take the second slot.

Indian Dreams garnered a lot of betting and was the firm favourite at race time. It was an exciting finish though that had the crowd, particularly the large backers that Indian Dreams had to go vocal as he made a bold but in the dying moments of the race.

Ikigai had a good lead coming into the homestretch and Indian Dreams was still around in fourth position, with jockey Kuldeep Singh doing all he possibly could to get the Satyanarayana ward going. Indian Dreams took his time to get the momentum going and when he picked up speed, he arrived with a fierce force. Ikigai was hanging on for dear life and hoping for the winning post to arrive sooner, however, that was not to be as Indian Dreams ate up ground at a good rate and managed to snatch victory on the post to the delight of his backers.

Ravindra Singh trained Top Sprint (Tariq – Everybody Counts) put in a exceptional gallop to cover considerable ground in the final furlong to score with surprising ease in the end. Sefarina looked on course with 400 to go and then Cash For Rank came up with a challenge. These two were battling it out when Ultimate Risk and Top Sprint started to warm up with less than 150 to go. While ultimate Risk worked up good speed, Top Sprint was on a different level altogether. He arrived with a big gallop and breezed past them all to win with a healthy margin. Ultimate Risk fared well but was unfortunate to encounter Top Sprint at his devastating best. Cash For Rank did well to save place money.

For the professionals, jockey BR Kumar was the lone pro to score a double.