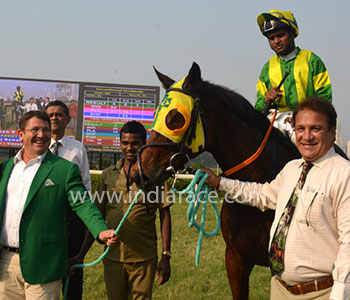 Caprisca, the hot favourite could not capitalize on the good position he was in at the turn and failed to quicken. However, it was later learnt that Caprisca had bled.

Raees led them all the way into the straight with Caprisca in tow, Jack Frost, who was in the third position for most of the way, moved up gradually at the turn to be prominently poised for his final charge. Raees held on until the distance post and as Caprisca packed up, jockey Neeraj Rawal got going atop Jack Frost. Vulcan too was moving up and making good progress and the crowd was barcing for a thrilling finish. Jack Frost though, packed a punch in his galloping speed and thundered ahead to score with authority. Vulcan just managed to pip Raees for the second slot.

Clymene (Western Aristocrat – Magdalena, Nanoli Stud) pulled off a clinical victory in the Class I Madras Race Club Trophy, without encountering any challenge. The bay filly trained by Faisal Abbas, settled behind leader Wild Fire until the turn and moved on the bit most of the way. Glyndebourne and Congressional kept each other company while Wise Child and St Andrews brought up the tail.

Clymene progressed, with jockey Dashrath Singh still keeping her hard held early in the straight and cruised ahead past Wild Fire. She accelerated fluently and looked pleasing as she swung into poetic motion stretching out majestically to outclass the rest. She won with a lot to spare and looked the winner with a furlong to go. St Andrews quickened well and finished second, a noteworthy effort considering he was giving weight to younger speedsters. Wise Child improved positions to finish third close behind St Andrews.

Bronx (China Visit – Blue Ridge, Usha Stud) was another one who scored an impressive victory without encountering any resistance. At the start, Till End of Time was slowly off, while Star Bright, stopped galloping and took no active part in the race.

Augustus Caesar hit the front and led them all the way into the straight. Relentless Pursuit got alongside the leader but soon Bronx arrived smoothly to join these two. Jockey PS Chouhan waited a while before skipping away from his two rivals. Bronx picked up good momentum and won drawing away by a good margin of over three lengths. He can win again if placed well next time out. Augustus Caesar ran on to take the runner up slot ahead of Relentless Pursuit. Till End of Time fell to the poor start and her run is best ignored.

Highland Empress (Excellent Art – Meohmy, Villoo’s Greenfield Farm) notched up her maiden victory in style on her seventh start. Trainer Rehanullah Khan had her in the pink of condition this time and the filly never broke a sweat while tackling her eight rivals.

Sunderji ward Notting Hill (Tariq – Pure Elation, Equus Stud) achieved his first success and he was made to earn this one by Fleur De Lys. Jockey CS Jodha settled Nothing Hill well behind as Fleur De Lys galloped to the front and held sway well into the straight.

Notting Hill made steady progress and was in good position, but had to cover some ground to get abreast of the leader. He passed the others easily, but was locked in a grim battle midway in the straight. Fleur De Lys was reluctant to let go of her lead, however, Notting Hill got stronger at the finish and bounded ahead in the last few strides to score a comfortable victory. Fleur De Lys ended a good second clear of Aquarius.

Rare Silver (Glory of Dancer – Gaea, Nanoli Stud put in a strong gallop in the second half of the straight to beat Smokey Haze closer home to carve out a narrow win. Isinit led them into the straight, but Smokey Haze surged past her at a good clip. Smokey Haze built a handy lead and kept galloping when Rare Silver started to mount his challenge from the outside. Jockey CS Jodha atop Rare Silver had to ride the Imtiaz Sait ward strongly to get him past a determined Smokey Haze. The latter fought till the end and ended a gallant second. Isinit saved the place money.

Royston Rock (Mull of Kintyre – Tekindia, Sohna Stud) added to his Pune victory capping a back-to-back double in the process. Royston Rock made a dramatic arrival in the latter half of the straight as it was Good Thing who led them into the straight with a bunch of horses in chase. Royal Ace was the first to challenge Good Thing and had Make It Shine on the outside, with Golden Horde and Royston Rock galloping briskly on the wider outside.

Golden Horde and Royston Rock pulled away from the rest and Royston Rock, with apprentice Kuldeep in the saddle, finished fastest scoring a thrilling victory by a neck. Royal Ace finished a faraway third.

For the professionals, jockeys PS Chouhan and CS Jodha  scored a double each.