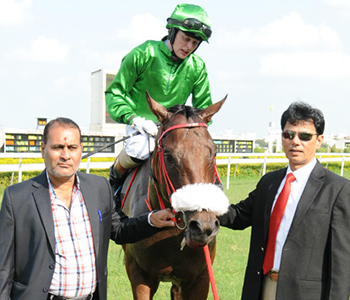 Only two prime favourites obliged in the seven-event opening day card of the new season at Hyderabad. A couple of next-in-demands, three long-shots and two unsuccessful objections was how the day panned out. The races were run on the monsoon track as the winter track was not fully ready due to the persistence of rains staying on longer than expected.

Laxman Singh trained Vijay Singham (Leitir Mor – Zarandja) produced his best at the business end to score a well-earned victory closer home. His main rival Sitara looked on course as she enjoyed a free run out in front and compiled a sizable lead after turning for home. Even past the distance post, Sitara was well ahead with Vijay Singham lagging by nearly four lengths. Jockey Robbie Dawney got to work seriously and Vijay Singham began to respond steadily. He picked up momentum in the last 100 meters or so coming in at top speed for the final few strides. His pace was too hot to handle for Sitara and the filly ran out of steam when it most mattered. Vijay Singham stormed past to score by a length. Flamboyant Lady too finished on strongly inflicting yet another blow on Sitara, snatching the runner-up berth on the very last stride.

The opening day feature race Srisailam Cup had two divisions. Trainer K Sateesh’s ward Best Friend (Charmo – Love Me Tender) won the upper division of the race with a measure of comfort and thus achieved his maiden success. Apprentice lad Jitendra Singh made a quick forward move at the start to take the lead and led them all the way.  Best Friend had shown progress in his recent runs; however, Handsome Duo grabbed the market trends at 2/1, while Best Friend and Moka had their share of supporters as well.

Best Friend kicked on gamely, always maintaining a safe distance from his rivals. Love Machine drifted out alarmingly and Moka suffered a bit of hindrance on that account. Handsome Duo made a timely swerve inwards and made a forward surge. Best Friend showed no signs of tiring and chipped away meters of turf to eventually stay close to three lengths ahead of Handsome Duo at the finish line. Human Touch improved to finish half a length behind handsome duo and save place money.

Lock Stella had shaped well leading them into the straight and was a good two lengths ahead inside the final furlong. Favourite His Excellency had too much to do in the straight and was taking time to get into top gear. Guiding Force quickened extremely well and started to cut the distance and was pouncing on Lock Stella. He lunged forward and grabbed the lead to nail it by a narrow margin, with Lock Stella, Her Excellency and Patron Saint all finishing close together.

The Beginners Plate, a race for two-year-olds had eight aspirants in the fray. Trump Girl Mull of Kntyre – Oceanic Wisdom) in the hands of jockey Vikrant made it count in well-contested race.

Queen Daenerys took off briskly from the gates and led the field all the way into the homestretch. Favourite Astronaut was all at sea and was never in the hunt. Aintree was sticking by the leader and was looming large, threatening to get past Queen Daenerys with a furlong to go. Trump Girl was making her presence felt and was inching closer to the pair in front. Aintree squandered a good chance by drifting out under pressure. Trump girl seized the opportunity and dashed past between the two to register her first win on her first outing and that is as memorable as it gets. She carved out a narrow win with Aintree and Queen Daenerys close alongside.

Trainer L D’Silva’s Red Snaper (West Virginia – Shanghai Gal), ridden by Jitentra Singh,  made ample amends for his last start loss, this time sustaining all the way in a neat start-to-finish essay. He had a good lead coming into the straight and he kept the momentum going all through to sail home by over one length. Tiger of the Sea chased the winner more in hope than conviction and had to be content with the runner-up berth, finishing well ahead of Angel Tesoro.

Mind Reader (Saamidd – Clogher Clove) saddled by Sateesh, scored a facile victory leading from the start. He was guilty of being wayward in some of his previous runs, but this time he was spot on. Keeping a straight course he stuck to the rails and galloped at a good clip to leave nothing to chance and outpace his rivals by close to seven whopping lengths, leaving the rest to fight for the minor slots. Flag of Honour just manage to pip Bar Et Law from the second place.

California Beauty (West Virginia – Mineral Deposit) trained by Sk Waseem Ahmed won the concluding race of the day, the 15 to 1 shot making it through with surprising ease. Down a class, the three year old had never finished on the frame in five previous outings, but was altogether a different and fitter runner this time around.

California Beauty cruised into the lead soon on start and stayed ahead all the way. Vallee Ikon was some distance away as they entered the straight. California Beauty, with Vikrant in the saddle, simply pulled away in the last furlong to score by four lengths. Air Salute ran on to finish a tame second, while the fancied Red River ended up close behind the runner-up.

For the professionals, trainer K Sateesh, and jockeys AA Vikrant and Jitendra Singh scored a double each.