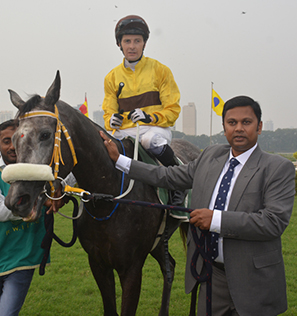 Racing action finally began at the Mahalaxmi racecourse attracting a fairly large crowd to the iconic venue. The grandeur of racing on the Mumbai turf is unmatched in the country and the racing fraternity in general welcomed the 'shift' back to Mumbai with warmth and the usual dose of excitement. It may be recalled that the start of the Mumbai season was made at Pune due to the late 'November showers' rendering mainly the stable area non-conducive to housing the horses. Also the bund school and other such areas for the horses to go about their preparatory routine were not in any way ready on time. At one point in time it looked difficult if not impossible, to get the races going even in the first week of December! However, the entire team of the estate department headed by Mr Suhail Mohamed and his trusted lieutenant Mr Ashraf Shiekh left no stone unturned, racing against time and working almost round the clock to get things in perfect shape. The will, determination and effort put in by the entire team and particularly by M/s Suhail and Ashraf paid off and ensured the day went off smoothly.  There were many in the management as well as the professionals who also felt that the estate team had done an excellent job in getting things ready and agreed that it was contrary to what they actually felt seeing the messy state with less than three or four weeks to go!

Action on the turf too was suspenseful with some tight finishes and one of the major surprises was in the Maharaja of Morvi Trophy, the feature race of the day. The highly reputed Sultan Suleiman tasted his first ever defeat at the hands of Juliette (Musketier - Gimmesumsugar, Sohna Stud) from the Karthik stables.

Alexei took off at a steady pace for the mile-long journey with Sultan Suleiman and Storm Breaker close behind, a couple of lengths behind was Juliette who had only Dreams behind her. Alexei looked good coming into the homestretch as she was travelling well and also had a handy lead. Sultan Suleiman was taking time warming up even as Storm Breaker was struggling to keep up. Jockey Colm O Donoghue started to make his move and propelled Juliette to gallop along the inner rails deftly and started to close in on Alexei. She got past Sultan Suleiman while doing so and was certainly progressing nicely. Sultan Suleiman however, came under pressure as Juliette skipped ahead and caught up with Alexei with less than 100 m to go. Colm Donoghue added the finishing touches and guided Juliette past Alexei to win comfortably. Sultan Suleiman gained on Alexei to snatch the runner-up berth just in time. With Sultan Suleiman coming off a set back, he was withdrawn on vet grounds at the Nth hour for the Pune Derby, this run can be taken as a limbering up and his stocks need not take any dip. He is sure to bounce back after this run. Juliette returned the star performer also one to take the turf after a long layoff. She did creditably while Alexei went down fighting and has scope to improve as well. To sum it up, the top three in this race will be a force to reckon with through the season.

Trainer Pesi Shroff and jockey Leigh Roche combined well to pull off a popular double on the day. They first struck with Nekhbet (Kingda Ka - Nawazish, Nanoli Stud) in the second race of the day. Nekhbet, this time, was right up in front alongside early leader Ithaca and these two led the field into the homestretch. Nekhbet left her companion behind and stretched ahead with Leigh Roche labouring hard to keep the filly going. Nekhbet needed all the help she could get from the saddle and Leigh Roche was up to the task. Not too far behind, Medici and Shae were prominently poised and they were looking threatening. Nekhbet had to dig deep to hang on to the lead and she just about managed to hold on by just under a length. Shea got the measure of Medici closer home and snatched the second place. Favourite Moriseiki arrived when all was over to finish in the frame.

Mirabilis (Multidimensional - You Are My Miracle, Usha Stud) was a much easier proposition and the well-backed favourite won without causing any anxiety to her supporters. She was last of the five runners and was unperturbed even as Star Comrade and Mozart were way ahead of the rest at the turn. Mirabilis still had some distance to cover when they straightened up for home. She moved along the rails and once she opened throttle, she looked good to beat the lot. Neither Mozart's couple of lengths lead nor Golden Hind's forward surge made any impact on Mirabilis. She dominated the final furlong and zipped past the duo to score by a healthy two-length margin. Golden Hind worked hard to peg back Mozart for the runner-up berth.

Jockey A Sandesh too scored a double starting off with a fluent win astride Narendra Lagad trained En Sabah Nur (Diffident - Queen of Hearts, Poonawalla Stud). Sitting up third close behind Bonafide and Secretary, Sandesh made his move early, soon on entering the homestretch. En Sabah Nur galloped resolutely and established a sizable lead and left the others to do the catching up. Secretary was found wanting, while Titanium gained ground to finish a decent second. Warrior Clan ran on to finish third.

Sandesh next partnered Adhiraj Jodha's Tasawwur (Multidimensional - Transformation, Usha Stud) to a come-from-behind win with a scorching finish. Valegro looked on course as he led them into the straight and was travelling well. Tasawwur had a lot of ground to cover and he started to inch closer approaching the distance post. Valegro still had a useful lead coming into the final furlong, however, Tasawwur picked up speed in the final 150 m to surge ahead closer home to notch up a comfortable victory, his second on the trot after finishing on a winning note at Pune. Truly Epic who was in the rear for most of the race, ran on to finish third.

Jockey Dashrath Singh had to use all his guile and artistry while piloting Godsword (Diffident - Calista, Poonawalla Stud) to hold on until the safety of the winning post. God's Decree led them into the straight by a slender margin and was soon tackled by the hot favourite Multibagger. However, before Multibagger could any further, Godsword challenged him strongly to take charge approaching the distance post. The Narendra Lagad trainee quickened well, but had Majestical breathing down his neck. Dashrath Singh put his head down and rode with determination putting everything into it even as Majestical was drawing closer with every stride. Be Frank also made rapid progress, but Godsword had enough legs to win by a narrow margin from Majestical. Be Frank was the one who caught the eye while finishing close alongside the top two. He had lost a couple of lengths at the start and was the last to turn for home, yet arrived with a fiery gallop to finish a very close third. He was clearly the fastest moving among the trio and the winning post arrived just a couple of strides too soon for Be Frank. For a first run, Be Frank did exceptionally well and recovering from a tardy start was another thing of note. Keep an eye on this Imtiaz Saits's ward.