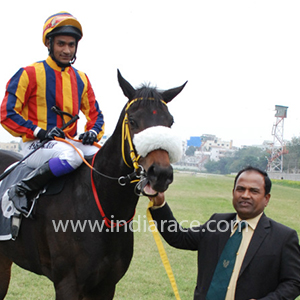 Top weighted Havelock Cruise (Chinese Whisper - Yughanni) saddled by D Netto, 'cruised' to victory to claim the Banarsilal Gupta Memorial Cup, the feature event of the day at Hyderabad. Offered at a nourishing 3/1, Havelock Cruise rolled off to a sizable lead and maintained a stranglehold all through the nine-furlong race. He entered the straight with a handy lead and jockey Imran Khan was not going to let go of the advantage. He kept the momentum going with Havelock Cruise galloping fluently all the way past the post. Favourite No Compromise moved up in the straight but had a huge task on hand. He tried his level best but could make little impact on the winner. No Compromise beat the rest finishing second. Francis Bacon was the one closest to Havelock Cruise entering the straight, but could not match the speed of either the winner or the runner-up, thereby ending a tame third.

A race earlier, D Netto trained Versallies (Green Coast - Delafruz) began where she had left off last season and stretched her winning streak to five! However, she had to work a tad harder this time as she encountered stiff resistance from Highly Acclaimed. Versallies improved to second as Highly Acclaimed led them into the straight. Highly Acclaimed kept galloping at a brisk rate as Versallies started to draw closer. jockey Akshay Kumar rode out filly putting everything into it and soon got alongside the leader with about 100m to go. Versallies pulled out that little extra as the pair fought neck and neck and got that bit stronger in the last couple of strides to win by a neck. Highly Acclaimed ended a gallant second, well ahead of That's My Class.

Debutante two-year-old colt Conscious Gift (Speaking of Which - Brushed Aside) thrived in the hands of ace jockey Suraj Narredu and scored a runaway win to make an instant impact. He was out quickly at the gates and settled alongside Kapell Bruke. This pair had Royal Valentine and Lightning Pearl close behind with the rest a couple of lengths further behind.

Conscious Gift had no difficulty in surging past Kapell Bruke and he did so soon on entering the final 400 meters. It took just a couple of reminders and the L D'Silva trainee shot ahead leaving the rest far behind. Conscious Gift won by over four lengths eventually to make it a memorable debut. Kapell Bruke stayed on to take the runner up berth, while Lightning Pearl got the better of Royal Valentine for the minor slots.

King Maker (Varenar - Yemen Desert) put in a strong stretch run to score an emphatic victory. The Deshmukh trained colt was right up in second behind Classy Guy until into the straight. Apprentice jockey Surya Prakash swung into action past the 400 m mark and shot ahead past the leader. Once in charge, King Maker galloped on gamely all through the straight to win with a measure of comfort. Max would have rued the tardy start, he lost about two lengths, as he made good progress in the homestretch and beat the rest comfortably. He rallied from the last position to finish just two lengths behind the winner. Lightning Fin and Tokyo Jam filled the minor slots, but Siyabonga was a huge let down for his large followers. She was in contention until into the straight, but simply did not raise her known gallop when it mattered. She faded out without raising any hope whatsoever.

Faiyazz Khan trained Digger (Mathematician - Akaliki) pulled off a sensational last stride victory and for his scores of backers this was an euphoric moment as Loch Stella had all but put paid to their hopes until a couple of strides earlier. Loch Stella had put in a strong run and was leading comfortably coming into the final furlong. Digger started to inch closer, yet it looked a tough ask. Jockey Akshay Kumar rode his heart out and drew level with a couple of strides to go. The screams went up decibels high as the fighting duo flashed past the wire locked together. The cheer grew louder when the judge declared Digger the winner and the margin would have been shortest possible.

Deshmukh trained Miss Lily (Phoenix Tower - May) put in a gritty effort to down favourite La Mer to carve out a narrow victory in a thrilling finish. Gorgeous Lady retired as soon as they entered the homestretch and La Mer readily took over the running. La Mer soon established a handy lead and galloped at a brisk rate. Miss Lily warmed up and went in chase of the leader. Ashka Ashka Ashka could not find much and failed to match up. Miss Lily was ridden hard by jockey Surya Prakash and the filly responded well in the closing stages to peg back La Mer a stride or two from the winning post. Sublime rallied well to beat Delphina for the place money.