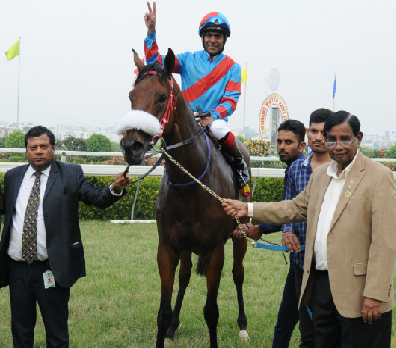 Paso Robles (Arazan - Mawaheb) produced a strong stretch run to sail ahead and then successfully thwarted a late but strong challenge thrown by Cape Kidnappers in the closing stages. Ice Floe went for it from the word go and galloped at a steady pace. She was followed by Winall until the turn; Paso Robles and Cape Kidnappers raced shade over a length behind the front runners and then followed Kariega, British Empress and Flamboyant Lady.

Ice Floe didn't last long although she tried to stay in contention even as Paso Robles, saddled by L D'Silva, gathered momentum and got past her. Cape Kidnappers started to draw closer approaching the distance post. Jockey Suraj Narredu nudged Paso Robles to pick up speed and then held off Cape Kidnappers by a length to win the Golconda 1000 Guineas (Gr2) by a length. Cape Kidnappers finished on well to end a good second; while British Empress rallied well to snatch the third place form Ice Floe. Among this opposition, Paso Robles made just the right moves and went for the kill perhaps a tad too early, however, she showed enough to indicate that she would not find it difficult to stay over the longer trips as well.

Another talented three-year-old Prince Valiant (Varenar - Alma Mater) showed his class while cruising home to a solid victory in the opening race of the day. The Deshmukh trainee raced closer to the rear end of the field as City of Wisdom amassed a sizable lead all the way into the straight. However, City of Wisdom ran out gas soon after and Marinetti took charge approaching the distance post. Prince Valiant took a stride or two to warm up but once he did he gathered tremendous speed and didn't take too long to overhaul Marinetti and then drawing away in the hands of jockey Ajeeth Kumar to win by a comfortable margin. Marinetti ended two lengths behind but well ahead of Midnight Dream and Artistryy.

Satyanarayana trained NRI Symbol (Dancing Forever - Secret Path) had to fight her way past Top Contender to score a narrow victory. Arc of History led them deep into the straight but lost the fizz and fell back. Top Contender took charge with a little over a furlong to go but was soon confronted by NRI Symbol. The duo fought stride for stride through the final furlong and apprentice jockey Rohit Kumar did exceedingly well to get past the Trevor-ridden Top Contender and snatched victory close home. Vancouver ended a far away third.

Hassan trained Ayur Shakti (Midnight Interlude - Excellent Day) scored a clinical victory and jockey Suraj Narredu relied on riding hands and heels without using the whip hand. He pounced on the front runners soon on straightening up for home and cruised ahead to amass a big lead. Ayur Shakti picked up good speed and never looked in any danger at any stage. Favourite Beyond Limits was kept behind by jockey Akshay Kumar for far too long and was left to do too much in the homestretch. With Ayur Shakti travelling as fluently as she did, Akshay could have had no hopes whatsoever of catching up. Ayur Shakti won easing up and Beyond Limits ended a tame second a good three lengths from the winner. City of Blossom saved the place money.

Sreekant trained Nayadeep (Gusto - Fast Escape) produced a powerful finish that floored the opposition completely. Shaquille led them deep into the straight and tried to runaway with the race until Pontius Pilate came along. however, just when Pontius Pilate had gotten past the leader, Nayadeep, with Akshay in the saddle, arrived with a devastating run to simply zip past and then draw away gaining complete control in the final furlong. Nayadeep romped home in style leaving Pontius Pilate and company far behind to win by a huge margin of more than five lengths. Pontius Pilate and Shaquille had to be content with the minor slots.

Faiyaz Khan trained Takisha (Green Coast - Political Power) was strongly ridden by apprentice Gaurav Singh to hold on determinedly and carve out a narrow win and create a flutter. The 15/1 shot zipped past early leader Secretary inside the final 400 meters and accelerated well to build a handy lead. Secretary simply could not match up but hung on hoping for the next best position; however, Air Salute weaved his way between horses and picked up in the final furlong to peg back Secretary only to secure the runner-up berth well behind Takisha.

Buttonwood (West Virginia - Tinkerbell) attracted a lot of betting in the concluding race of the day and boy did he oblige! Apprentice jockey left nothing to chance as he improved position at the turn and was in striking position as they turned for home. Buttonwood surged ahead and once in the lead he stretched out sweetly to race away from his opponents leaving them no chance. Solo Winner rallied on to take the runner-up slot well clear of Ajmal Birju.

Jockey Suraj Narredu was the lone pro to score a double.