SHIVALIK SIGHT LIVES UP TO EXPECTATIONS 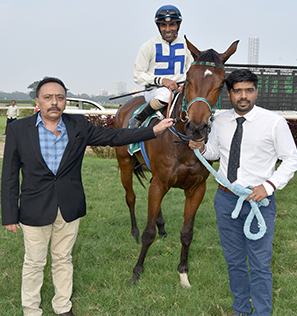 Jasbir Singh-trained Shivalik Sight lived up to expectations with a measured victory over the favourite Jaivant in the 2800m race for the Calcutta St Leger, which is the last and longest classic of the season. Jockey Imran Chisty was seen at his best in this marathon event as his pace judgement was impeccable. Lying dead last of five till the 800m marker while Abhya Gama set a cracking pace with stablemate Jaivant (Suraj Narredu up)  five lengths behind, Chisty moved into a box seat in a trice at the top of the straight, just a length behind Jaivant.  Thereafter, the duo went flat out, with the filly by Saamidd out of Seasahm easily travelling the better of the pair in the final furlong. Much hyped Roll Call finished a despondent last after paying a final entry fee for the second time this season. On the previous occasion, in the Oaks, she refused to be stalled. With this triumph Imran Chisty completed a well-deserved treble, his other winners being Rush For Gold and Lumos – both from the stable of Javed Khan. Trainer Vijay Singh and jockey Suraj Narredu combined fruitfully to fetch home a double with Essos and Valeria.

The afternoon commenced with Trevor Patel riding one hell of a finish astride Bharath Singh-trained Midnight Phantom (Midnight Interlude-Golden Bright) in the mile-and-quarter race for the Armetta Handicap. The six-year-old carried his top-weight to a short-head victory over bottom-weighted Headboy, a recent import from western India. Thereafter, Chisty started to set the ball rolling. In the five-and-half furlong race for The Surfside Handicap, seven-year-old Mr Fogg’s with Trevor astride, shot ahead as the gates opened and had Miami for company. But after the straight, the aged sprinter shook of all rivals and looked headed for home. With barely a furlong to go, Chisty got a lovely rails-run astride Javed Khan-trained Rush For Gold (Chevalier-Alhuda) and powered his way to the winning post. He was however fortunate that runner-up Tiberon was taken miles wide by Stellanova. Otherwise, there might have been another story to tell. But that’s horse racing – one has to take the good with the bad!

Chisty then rode another power-packed finish astride Lumos (Arazan-Sea Queen) to peg back Moskova in the final 100 metres of the Red Chief Handicap. Atom continued to earn his corn bill by placing once again. The ante-post favourite Daneira faded out after a show of early speed. The Maidens race for the Calorific Plate saw Vijay Singh-trained Essos come good without much ado in the safe hands of Suraj Narredu. The six-furlong sprint suited this full brother to Meekathara and Alyssa to the hilt. The colt by El Johar out of Hava Nagila has more races in store for him. The disappointment in the race was Gold Ray who was never in it. Suraj and Vijay completed their double with the filly Valeria (Win Legend-Integral)  in the Serendine Cup. She overcame her 5kg penalty to score a neck victory over fast-finishing Dancing Lord.

Shafiq Khan’s eight-year-old BangBang (Stardan-Ballad Of Glory) shot down all and sundry in the day’s final event. Apprentice Tejeshwar brought the aged war horse with a fluent run in the straight to get the better of Rare Bird and Aquaracer. The less said about the fancied trio of Lesley, Roethke and Fancourt, the better.