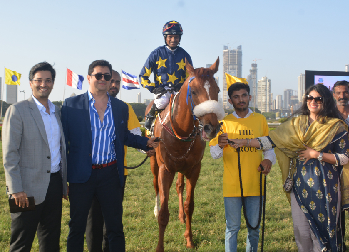 Adhiraj Jodha trained Vulcan (Sedgefield – Shining Force, Jai Govind Stud) kept his date with victory and claimed the CN Wadia Gold Cup (Gr2) without encountering any worthwhile challenge. Majistero set the pace leading the field all the way into the homestretch. Vulcan chased the leader right from the start and drew level past the 400 m mark. Caprisca couldn’t get going although he was just about a length off Vulcan and Majistero. While Vulcan shot ahead and bounded forward, Caprisca looked woefully off colour and also found the burden of giving weight around a bit too much to handle. Vulcan won well and scored his ninth career win, consolidating his staying prowess having won over the 2400m distance for the sixth rime. Majistero easily held off Caprisca for the runner up slot. Bronx ended close behind Caprisca, without making any impact on the race.

Jockey Sandesh had earlier guided two firm favourites to victory. He first partnered Auburn (Champs Elysees – Atwirl, Nanoli Stud) to a stylish start-to-finish victory while claiming the Mulraj Goculdas Trophy. They set off at a good pace for the seven furlong race and Auburn made every post a winning one. In the straight, Augustus Caesar did make an all-out effort, but failed o make any impact on Auburn. The Vishal Gaikwad trainee galloped fluently all through and romped home a clear winner, taking her win tally to seven and this was her first win over seven furlongs. Most of her wins have been over the mile and one over nine furlongs. Augustus Caesar ended a tame second.

Mishka’s Pride (Total Gallery – Tsesebe, Mebajeona Stud) came good and about time too. She had gone close last time out, but this time the Imtiaz Sait trainee looked in command the moment they turned for home. Grey Falcon tried the runaway tactics and had a huge lead until the turn, but it all came to a nought as he ran out gas way too early. Mishka’s Pride took charge in the straight and romped home to score a majestic victory with five lengths to spare. Lucky Luciano ended second well ahead of Benevolence.

Jockey Neeraj Rawal pinched a double winning the first race of the day astride Enid Blyton (Showcasing – Passing Hour, Equus Stud) and signing off with Barack in the day’s concluding race. Both his mounts were offered at back-able odds and offered healthy returns.

Pleiades hit the front with Memorable Eyes and Steppenwolf close behind. Enid Blyton raced along the rails initially in the fourth or fifth with Guarnerius a couple of lengths behind her. Pleiades kicked on as they entered the straight with Memorable Eyes making his bid along the rails. Neeraj brought Enid Blyton from the outside to join these two while Guarnerius poked through between horses. They were four in a line with less than a furlong to go, however, Enid Blyton picked up speed to finish on well and skip away to win by close to two lengths. Guarnerius tried hard, but could only muster enough to beat Memorable Eyes for the second place.

Neeraj later rode Pesi Shroff trained Barack (Multidimensional – Fond Fantasy, Usha Stud) to a fairly easy victory. He took charge soon on entering the straight getting past My Precious with ease. Barack accelerated well and soon compiled a handy lead. Western Front shaped well approaching the distance post and there seemed a fight brewing; but Barack proved too good on the day and that possibility soon petered out. Polyneices warmed up far too late and could only beat Western Front for the runner up slot. Barack looked the winner from the moment he took over and eventually won by a little over a length.

Vishal Gaikwad trained La Teste (Western Aristocrat – Kilkenny, Nanoli Stud) showed commendable improvement over her debut run and reversed the three lengths plus margin that Isle of Skye had piled up against La Teste in their previous encounter.  Isle of Skye could not sustain her start to finish mission and surrendered meekly when La Teste came along with about 300 to go. Jockey PS Chouhan picked up soon on turning for home and zipped past Isle of Skye midway down he straight to draw away and win with a fair measure of comfort. Isle of Skye hung on to finish second just ahead of Maplewood and Minx.

For the professionals, jockey A Sandesh scored a fine treble, while trainer Vishal Gaikwad and jockey Neeraj Rawal scored a double each.