TIZ THE LAW REASSERTS HIMSELF IN DOMINANT FLORIDA DERBY WIN 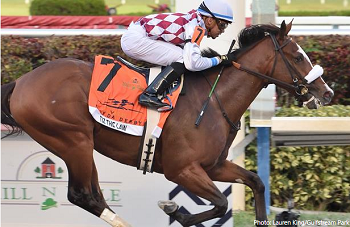 Oh, if only there was still a Kentucky Derby to run five weeks from Saturday, then Tiz the Law may be heading to Churchill Downs as the favorite.

But the colt, already the Holy Bull (G3) hero earlier in the Gulfstream Park meet, dominated a Grade 1, $750,000 renewal of the Florida Derby in front of an empty grandstand owing to the ongoing coronavirus pandemic.

Can he be just as good on the first Saturday in September?

Sackatoga Stable’s 7-5 favorite took an outside, stalking trip and rolled to 1 1/8 miles in 1:50 under jockey Manny Franco. The Barclay Tagg trainee was never much challenged once set down for the drive, adding 100 Kentucky Derby qualifying points and another Grade 1 victory to his resume following last fall’s Champagne (G1) around one turn.

"He is something special," said Sackatoga's Jack Knowlton. "It would be a lot of fun going to Kentucky in five weeks, but that’s not happening, obviously. Now we get to run some more races."

“I want to give all the credit to the horse,” Franco said. “He broke out of there perfectly — like a shot — and I was able to break and let the horse on the outside clear me. I ended up in a great position. I sat third and just went about waiting for the right moment…

“When I called on him a little bit, he was there for me.”

Somewhat surprisingly, the pacesetting Shivaree stuck around for second over Ete Indien, the Fountain of Youth (G2) winner. Gouverneur Morris was fourth.

Nine ran in the Florida Derby after the scratches of Disc Jockey, Soros, Ajaaweed and My First Grammy. Also-eligible Rogue Element, a maiden from the Dale Romans barn, drew in off the also-eligible list but did not factor.

Tiz the Law returned $4.80 as he improved his career record to 5:4-0-1. The New York-bred colt has been mostly untouchable outside of a troubled third-place finish last November in Churchill’s Kentucky Jockey Club Stakes (G2).

With 122 qualifying points, Tiz the Law is the new leader in the Road to the 2020 Kentucky Derby points standings. Tagg and Co. will have to get creative with their upcoming options as COVID-19 rearranges the racing calendar, but there’s no question they’ve got a leader in the division.

“I was very impressed, but I’ve been impressed with everything he’s done," Tagg said. "He just surprises me, everything he does he just kind of rises to the occasion and does it with aplomb.”

The Florida-bred sports a pair of listed Gulfstream stakes wins to his name and was runner-up Feb. 1 in the Swale (G3). Now Shivaree is on the Kentucky Derby trail, collecting 50 points toward the Run for the Roses with his valiant runner-up effort Saturday.