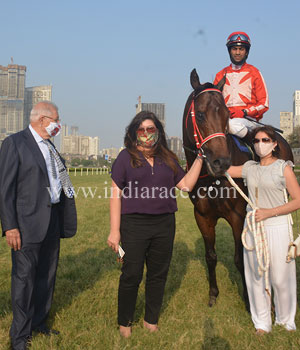 Hyderabad based Corfe Castle (Excellent Art – Miss Danehill, Poonawalla Stud) full brother to the speedy Ruffina, displayed sizzling speed at the business end to clearly outpace a strong set of opponents with a good degree of comfort. The manner in which the L D’Silva trained horse blew away the opposition was most commendable and that straight away puts him as one of the top favourites for next month’s Sprinters’ Cup during the Invitation Cup weekend.

The line-up for the Dr SC Jain Sprint Championship (Gr2) was a quality one. Local speedsters Kildare and Iron Age were the top market fancies while Corfe Castle too had his share of supporters.

Iron Age shot into the lead on expected lines and Kildare, as he had done last time out, sat on the tail of the leader. The others followed in a bunch, within striking distance from the front-runners.

Iron Age looked his usual self assuring self even as Kildare came alongside. Smashing Blue who was in third, could not quicken while Cavallo Veloce was just beginning to sprint ahead. Kildare could find even a fraction of his Pune form and dropped out of contention far earlier than expected. Iron Age held a slight edge, but the others were catching up fast on him. Approaching the distance post, Trevor stepped on it and Corfe Castle arrived with a dazzle that snuffed the fight out of his speedy rivals and also took the breath away of those in the stands! Corfe Castle produced a power-packed thrust to demolish them all and come away all alone, winning by two lengths. Cavallo Veloce ended a good second, while Gazino held off the late charge of Leopard Rock, the latter having to rally after receiving a check earlier in the straight.

Maplewood (China Visit – Stormy Wind, Usha Stud) had shown a clean pair of heels in his last outing over nine furlongs and this time too she floated sweetly to score an encore over 2000m. Jockey CS Jodha had the Sunderji trained gelding off the pace as Fleur De Lys led all the way until the turn. Cabo Da Roca and Flaming Lamborgini fought for the lead soon on entering the straight. Neither could go too far ahead. Maplewood started to warm up and came at them at a good clip catching up with them at the distance post and then he accelerated well to push for home unchallenged. La Teste worked hard to beat the rest and clinch the runner up berth, while Flaming Lamborgini finished well ahead of Magic In The Wind and Theon.

Sunderji reaped a rich harvest of two more winners by the end of the day. His ward Flying Scotsman (Phoenix Tower – Thread Bare, Manjri Stud) shook off his ‘bride’s maid’ tag on his first two attempts and came into his own, earning his maiden victory third time out.

Flying Scotsman was right up in front, settling behind Euphoric who led them into the straight. Flying Scotsman, with CS Jodha in the saddle, surged past Euphoric after a brief tussle and then flew away to play catch-me-if-you-can. Johannesburg in his keenness to make a fight of it, drifted out causing a dual mishap as he crossed ahead of Supreme Angel causing the latter to clip and fall along with jockey Neeraj Rawal as also Selena G, who was following them, dropping n dislodging jockey K Nazil. Both jockeys were sent to the hospital and were under observation; the horses too, thankfully, were not in any danger or discomfort.

Unmindful of it all, Flying Scotsman dashed ahead to score by a healthy margin from the fast finishing Zuccarelli who just about managed to pip Johannesburg for second place.

Sunderji capped the day with another winner in Titanium (Phoenix Tower – Merhawa, Manjri Stud) in the concluding race of the day. This was a long-drawn battle between On VA Danser who took off in the straight and Titanium who came from behind to launch a serious challenge. On VA Danser put up a stiff challenge when his lead came under threat. This duo fought out the final furlong, each going at the other stride for stride. However, in the last couple of strides, Titanium showed better resolve and depth to clinch the thriller by half a length. Luminosity pegged back Grand Architect for place money.

Shroff trained Theodora (Leitir Mor – Lovely Kiss, Poonawalla Stud) scored a facile victory adding to her debut win not long back to make it two in two. This one was even more impressive than her debut win as she had taken on a much set of opponents this time. She’s The Queen led them into the straight and soon Pepper collared her and surged ahead. Birkin Blower had to work hard to get going and make an impact. Just when he was on the tail of the new leader, Theodora, who was stalking Birkin Blower all along, opened the throttle coming from the outside. Apprentice jockey Kirtish Bhagat had little to do as Theodora picked up momentum nicely to leave them all struggling behind and race away to score an emphatic victory. Birkin Blower laboured on to take the next best position, while Percivale rallied well to finish in the money.

Superleggera (Net Whizz – Su Doku, Hazara Stud) who had had an educational outing last month turned out to be a big money spinner for his connections. The rookie was backed with high confidence closing as the prime favourite at race time. The Shazaan Shah trainee justified the prerace belief and landed the spoils without causing any anxiety.

Jockey Zeeshan settled Superleggera in the fifth spot and not too far away from the leaders Dilbar and Lady Lanette. ON turning for home, Sufiyah got going and went past the front running duo easily and was trying to build on her momentum. Superleggera started his chase and had to be ridden hard until he found his rhythm. A couple of cracks got him going and soon he was all over Sufiyah. He then marched on ahead to draw away from Sufiyah in the final 100 meters, eventually clinching his maiden win by a good three and half lengths. Sufiyah was impressive too until Superleggera stole her thunder closer home. Stick to the Plan managed to pip Hioctane for the place stakes.

Imtiaz Sait’s Circle of Love (Kingda Ka – Sentimental, Nanoli Stud) took her time to dish out her best as she earned her winning bracket on her sixth start. She made ample amends this time as she was a lot mature and divinely fluent in notching up her first win.

Circle of Love was closer to the rear initially even detached from the bunch in front. Trevor started to make progress approaching the turn. Meanwhile, Irish Eyes was shaping well approaching the distance post and a handy lead to play with. However, it came to a naught as Circle of Love arrived with a blistering run to sail past Irish Eyes and cruise ahead to compile an impressive victory by close to three lengths. Iron Throne ended a decent second well ahead of Irish Eyes.

Stars For You (Arazan – Starry Eyes, Poonawalla Stud) pulled off a comfortable win and the overwhelming favourite gave no cause of concern to her backers at any stage. The Rehanullah Khan trained mare was off quickly and jockey Bhawani Singh got her going to build on the good start and soon amassed handy yards leading them into the homestretch. Bhawani Singh did not let his guard down though as he urged the mare on keeping at a safe distance from Tristar and the others. Stars For You kicked on gamely to stay well ahead past the post to score her maiden victory on her fifth start. Tristar held off the fast finishing Honourable Eyes to keep the runner up berth.

For the professionals, trainer Sunderji saddled a treble, while jockeys Trevor and CS Jodha scored a double each.