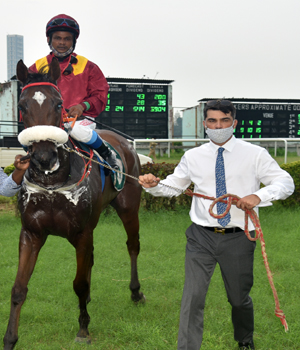 Trainer Neil Darashah and his trusted rider Arshad Alam completed a well-deserved double at the Calcutta racecourse on Tuesday with two runners who were turned out in the pink of condition by Neil – Mountain Lion and Sea of Cortez. Four-year-old bay gelding Mountain Lion (Phoenix Tower-Majorca) made the sprint for the Arcade Handicap his own without much ado. He did veer out in the straight but Arshad got him on even keel in a trice and he pulled away from Sitara who was by no means disgraced as she was conceding a good 8kg to her foe. For this victory, the handicapper has penalised Mountain Lion 10 kg. As he was 5 kg out of the Class 2 scale when he started the race, this places him in the middle of Class 2 where he should win again.

Five-year-old bay mare Sea Of Cortez (Phoenix Tower-Connessa) displayed a wonderful turn of foot to leave the field standing in the sprint for the Setaflame Handicap. She has incurred a penalty of 9kg for the win but should nevertheless win again in Class 2.

Jockey CS Jodha was in great form as he notched up a superb treble with The Indicator, Justified and Dandi Satyagraha. Maintaining The Indicator (Crimson China – Brutta E Cattiva) in fourth slot for most part of the mile trip for the day’s opener, Jodha rode out HS Bath’s ward to great advantage – stealing a march over his nearest rival Criteria who came with a late run to finish runner-up.

Trainer Aashay Doctor’s Justified (Multidimensional-Secret Garden) was next on Jodha’s list of winners. The five-year-old gelding was ridden judiciously by Jodha to bag the 2000 metres race for the Tweedle Dee Handicp. Forward runner Headboy was a creditable runner-up in the small four-horse field.

The sole upset for the day, if it can be called that,  came from the Bharath Singh stable in the form of After Shock ( Arazan -Guy Grand’s Girl). The five-year-old gelding had come down considerably in rating over the past couple of seasons and put his best foot forward when placed over seven furlongs. Jockey Hindu Singh took no chances and steered his mount to the helm of affairs from the word go and stayed there all the way. Script was a notable second while Rare Bird disappointed.