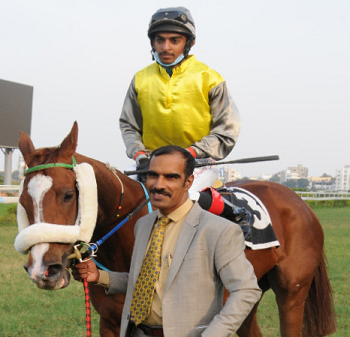 The Hyderabad Winter Season began on a sedate note with the usual mix of fancied and not-so-fancied runners coming to the fore, a couple of hot favourites going down tamely and baring a mishap in the last race, the first day was enjoyable. Jockey Mukesh Kumar astride Thunder Road was in command with about a furlong to go when his horse tripped and dislodged him right across the grand stands. Although Mukesh is out of danger, it is learnt that he has a broken wrist and would be away from the saddle for a good six weeks. Indiarace wishes the lad a quick recovery. It was also a memorable day for trainer Siraj Sunderji, who shifted base to Hyderabad recently as he chalked up his first victory with Market King providing him that honour.

New Look (Sedgefield - Ballade Denon) showed her preference to the middle distance by fighting off Southern Princess to win the Telangana Cup run over 1400 meters. Partnered by Gaurav Singh, New Look led briefly before letting King Maker take over during the early stages of the race. Fancied runner Fire Power was slow on the jump and that made his task a lot harder.

New Look entered the straight hard held and shaped well for the final 400 meters. Southern Princess started to build pressure, inching closer to New Look.. The Ravindra Singh trainee however, was equal to the challenge and put in a determined gallop to keep Southern Princess away to win it by half a length. Soloist could not find the fluency in his gallop and that pretty much cost him dearly.

After a couple of disappointments in the earlier races, trainer Shiraz Sunderji finally had reason to smile when Market King (Leitir Mor - Only For Gold) walloped the opposition while winning the Amarnath Gupta Memorial Cup.

Market King settled in the front bunch, in the fifth or sixth position and made a quick forward move soon on turning for home. Burano led them in with Strategist and Mystery alongside, but when jockey CS Jodha got Market King going, the consistent gelding who had thus far raced in the western India circuit, picked up speed instantly and broke away from his rivals to emerge clear at the distance post. Watch My Stride had given too much leeway and although he made good progress, he never did cause any worry to the winner's connections. Market King scored his first win on his Hyderabad debut taking his career win tally to three wins from seven starts that included three second positions as well. Watch My Stride went down to a better horse on the day, while Kingston improved well to beat NRI Elegance for the place stakes.

Champion jockey Akshay Kumar had a good opening day at office, booting home a hattrick with his first three assignments. He started on a winning note with Show Me Your Walk (Smuggler's Cove - Szable) from trainer Sequeira's yard.

Show Me Your Walk jumped out well and shared the lead with Explosive initially but marched on ahead once they turned for home. Show Me Your Walk built a handy lead showing quick acceleration but never really looked home and dry until the last couple of strides. Cosmico shaped well and was closing in but may have issues with the equipment, as the jockey was seen awkwardly placed in the saddle at the business end of the race. Unperturbed, Show Me Your Walk kicked on gamely even as Mauser and the late finishing Sweet Melody came in at full throttle and gained ground significantly. At the post, Show Me Your Walk spared 3/4l to Sweet Melody, who did well to beat Mauser for the runner-up slot.

Akshay's was brilliant in his finish atop Unsung Hero (Oiseau De Feu - Bon Ton) as he was pretty much towards the wrong end of the field until into the straight.

Narakamicie, the favourite, looked in command as he led all the way into the straight and quickened well too. By The Bay put in a strong challenge and got level with the favourite and while the others too were making a race of it, Akshay Kumar made steady progress with Faiyaz Khan trained Unsung Hero in the early half of the homestretch. By The Bay wrested the advantage from Narakamicie in the final furlong as just when it looked that he would stride away to victory, Unsung Hero arrived with a terrific burst to dash past the line right along with By The Bay. The photo finish went in favour of Unsung Hero by a 'nose' verdict making it a truly heroic victory for Unsung Hero. By the Bay was certainly unlucky to have lost it on the very last stride and will live to fight another day. NRI Sport too improved well to add more misery to the favourite, beating Narakamicie on the wire for the third place. For a first outing, Narakamicie didn't do too badly and deserves another chance.

After guiding Blue Origin to his maiden win last time out, by a huge margin, Akshay dazzled yet again piloting the Laxman Singh ward to another impressive victory. With Flying Scotsman attracting most attention, Blue Origin was second in demand, but at a fair return. ON the track however, Blue Origin made it a one-horse race, beating the runner-up Red Snaper by close to three lengths, Flying Scotsman not even figuring in the frame.

Blue Origin jumped out well and settled behind a line of three comprising Rivedavia, Horse O' War, and Nightmare. Flying Scotsman never was prominent at any point and that's a cause for concern to his connections.

Nightmare got past Rivadavia soon on turning for home and was fighting hard to stay in contention. Blue Origin, at that juncture, made a smooth forward surge and easily cruised past Nightmare to take charge. Once in the lead, Blue Origin stretched away flueon the wire ntly, dominating the final furlong while notching up his second victory following his maiden win last season. A third win seems well on the cards for Blue Origin. Red Snaper improved positions with a nice burst to take the runner up spot ahead of Nightmare.

Brilliant View (Tazahum - Regal Glory) pulled off a sensational last stride win and the one to suffer was Angeita who was unlucky to miss out after a strong start-to-finish effort. Angelita led them into the straight with a slender lead and shaped well until jockey Mukesh Kumar pulled Brilliant View out and made a forward charge approaching the distance post. It soon developed into a keen contest between the two as Brilliant View was picking up speed and gaining on Angelita. Brilliant View finished with a powerful run and got Angelita right on the wire to win a thriller. Angelita had to suffer the agony of letting it slip away on the last stride. Thanks progressed along the rails to finish in the money.

The season began on a successful note for trainer Prasad Raju who led in Furious Fun (Speaking of Which - Veena's Pet) in the first race. Furious Fun hit the front and travelled sweetly until into the straight. Apprentice jockey Santosh Raj niggled the three year old filly who responded well and soon built a sizable lead. Challenger and favourite Amalfitana were not up to it as neither showed much acceleration. That made the task much easier as Furious Fun was out of reach in the final furlong, winning it by five lengths to chalk up her maiden win on her fifth start. Golden Forza followed the winner home while My Master improved well to take the third spot.

The concluding race of the day saw a mishap right across the stands when Thunder Road, who was well clear and going for the final finish suddenly veered out sharply dislodging jockey Mukesh Kumar inside the final furlong. The sudden pull to the left while in full flight, unbalanced the hapless rider and there was no way he could escape the fall. Fortunately the riderless colt did not collide with those finishing on, but galloped on causing slight interference to runner up Grand Duke. Jockey Rohit Kumar atop QueenBlossom was just opening up with the Robin Reddy trained filly, but he showed quick reflexes and sharp presence of mind to avoid the riderless colt and then gather his mount and go for the kill. Queen Blossom produced a rerun to post her maiden win on her tenth start. Grand Duke could have gone closer or may have even got through, but that break in stride only got him the second spot. Winning Player improved to finish third.

For the professionals, jockey Akshay Kumar was the tops for the day with three wins. Trainer Laxman Singh saddled a double.