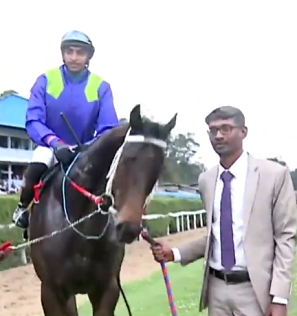 After enjoying a fine run on the opening day, punters returned home evens-stevens on the second day's races at the Blue Mountains, three favourites justifying their top billing in the small six-event card. The lesser fancied Gods Plan won the Nilgiris Municipality Trophy, the feature event run over a sprint in the hands of Gaurav Singh after the talented young apprentice had booted home the overwhelming public choice Fabulous Show  in the opening event.

Emelda  from B Suresh's yard garnered the maximum support in the plum event on the strength of her impressive performances on the trial track, but the favourite found the winner Gods Plan and Mzilikazi from Robert Foley's yard too hot to handle and had to rest content with the third spot. Gods Plan from Ramanathan's yard needed to win the race again in the stewards room following a protest from Nakhat Singh guiding the fortunes of Mzilikazi, who went down narrowly, a `neck' separating the first two at the wire. Nakhat lodged a protest pointing out that the winner Gods Plan had interfered with his progress at a crucial juncture ,which cost him the race. The stewards rightly overruled the protest considering the fact that the runner-up suffered from a chain reaction and more importantly was not totally blocked from making his run.

Gaurav and Ramanathan combined effectively in the opening event, the well supported Fabulous Show proving too good for her nine rivals in the sprint. The winner opened (3/1) in the betting ring, while the Rupa schooled Majestic Charmer was quoted at (11/10) at the start. But soon money came pouring in on the Ramanathan ward and Fabulous Show it was who ended up a clear favourite before the 10 contestants came under the starter's flag for the six furlongs event. The judiciously prepared and well supported winner justified the confidence of her supporters romping home in splendid fashion to the delight of Ramanathan. Icy River gained the runner-up spot ahead of Tifosi, while Majestic Charmer performed below par much to the chagrin of the Rupa camp.

Grandiose from Ajith Kumar's yard dropped the biggest bombshell recording a shock victory in the Annamalai Hills Handicap run over a distance of seven furlongs. The ten to one shot piloted by Ayaz Khan looked good in the paddock parade, but apart from a few fluke seekers none chose to pin their hopes on the Ajith ward. Illiustrious Ruler was the hot pick after Waytogo and Demesthenes opted out. The top market fancy from Robert Foley's yard piloted by Nakhat Singh and the second placed Wonderful Era found Grandiose too hot to handle, the Ajith ward donkey-licking the opposition by a widening margin of more than 10 lengths. Grandiose on the strength of this performance is too good to miss out in his next attempt and it will surprise most if this vastly improved performer  fails to provide an encore.

After Super Girl on the opening day, P Krishna struck again with the Champaklal Zaveri owned Excellent Star in the Rule Downunder Handicap on Friday. The winner confidently piloted by apprentice jockey M S Deora stuck to his task well and pegged back the challenge of arch rival Air Marshall. Royal Pearl, who was fancied sweetly in place finished third to the delight of her supporters who punted big on the Suresh ward to finish in the top three.

run over a distance of 1300 metres. The well fancied Sasakwa was the overwhelming favourite but this moody Robert ward was in no mood to raise a winning gallop and at end finished a tame third to the disappointment of followers of form. Karadeniz made a favourable impression and it will not be long before this game galloper from Rupa's yard enters the winners' circle.

Emperor Ashoka was the top fancy in the concluding event and the public rage from Sebastian's yard produced his best to help punters recoup their losses and return home evens-stevens, satisfied with the action and the results, the highlight being the double registered by Ramanathan and Gaurav Singh.