A STAR IS BORN PROVES A CLASS APART 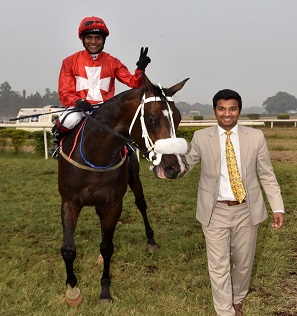 A Star Is Born lifted the Coromandel Indian Champion Cup with ludicrous ease at RCTC on Monday, thus proving beyond doubt that he is a class apart. In his post-race comments, jockey Suraj Narredu  said hat although he was a trifle saddened by the fact that he beat his favourite filly Success but there was no doubt about the fact A Star Is Born was the best horse on this day. When asked whether he will choose to ride him in the Invitation Cup at Bangalore, he said it was too early to say. He further commented that he was aware that his mount has a tremendous short burst of speed, so he saved his best for the final furlong.

Languishing in the rear of the field till the 600m marker while Botero set a fairly decent pace, Suraj was aware that he was on an exceptional animal and switched his mount to the wide outside at the top of the straight, thus avoiding all traffic problems. Success was the first to collar Botero but that’s where it all came to an end for the gutsy Derby and Oaks winning filly as A Star Is Born swept past her in a trice and won easing up by over two lengths. The son of Roderic O’Connor out of Angel Dust is a prized possession of the renowned Poonawalla family and is under the care of Rajesh Narredu. Botero and Stockbridge are the ones for the notebook. The former incurred a penalty of 9kg for this admirable effort in a ‘terms’ race.

The Mysore Race Club Cup saw the withdrawal of Galen which went in favour of the winner The Protector (Excellent Art-Mauna Kea) as Galen was far better placed at weights from their earlier clash. The favourite Presidential made a late bid for honours but by then Imran Chisty on the Javed Khan ward had wrapped up the race. The favourite could only finish an unimpressive fourth.

Apprentice Hasib Alam has been having a rough ride with the stipes of late. He had already been suspended for the next two race-days after his ride on Tycoonist last Wednesday. The stipes showed no mercy to the lad as he once again repeated his crime on the track on Monday. In the Navy Cup run over a mile, Hasib’s mount Cold Pursuit won the race but was demoted to the third slot after an objection by the rider of Arrow Point for bumping him and coming onto him in the last hundred metres. There is no doubt that Arrow Point would have won this race without interference but the fortuitous winner turned out to be Full Of Grace (Phoenix Tower- Closing Speed) as she had edged out the unfortunate Arrow Point by a nose for the runner-up berth. Full Of Grace is trained by Imtiaz Sait and was ridden by Imran Chisty who thus completed a double. While the stipes’ action is understandable, one hopes that it will not curb Hasib’s will to win. He must learn to change his whip-hand quickly when required to mature into a top-grade rider.

Jockey Trevor was at his powerful best as he guided home a brace with the help of his whalebone – Mezcal and Raisina Star. Bharath Singh-trained Mezcal (Western Aristocrat-Amber Valley) lifted the INS Hooghly Cup in grand style. From an outside draw in a field of twelve, Trevor had worked his way to the rails and covered him up. Once into the straight, front-running Yazh started to shorten his strides and Trevor wove a passage along the inside to win well from Sporting Trainer. Vijay Singh-trained Raisina Star (Top Class – Malakeye) brought the curtain down as she produced a thunderous gallop in the final furlong to get the better of Delphini close home in the  six-furlong race for The Echoes Of Light Handicap.

Apprentice Alex Rozario rode a clever finish atop B Mahesh-trained Toronero (David Livingston-Woman On Top) to set the trend for the early afternoon by winning the Alaskan Handicap. Toronero was available at lucrative odds of 7/1 as was The Protector - the winner in the next race. Punters fancies Asterix and High Spirit in the curtain-raiser performed poorly.