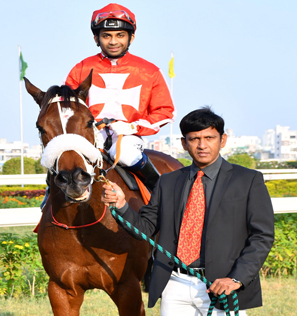 With the terms of Monday's feature event loaded in favour of Priceless Gold, the Rajesh Narredu saddled challenger from Bangalore was expected to score easily against an opposition which was far from intimidating. The half-money favourite did oblige but was made to work hard for his success.

Bellator, another Bangalore-based challenger in the five-horse set vying for the Qutab Shahi Million, made a start to finish dash over the mile journey with Black Onyx in chase while Priceless Gold was settled close behind. As the field was homeward bound in the straight, Ajeeth Kumar-piloted Bellator was still in command even as Black Onyx closed the gap and Yash Narredu was trying to get Priceless Gold into his stride. Watch My Stride and Beauty Blaze were almost out of contention at this stage. DS Deora-ridden flourished in the final 100m to swoop down on the leader and gained the upper hand close home. But Priceless Gold produced a late burst just in time to pip Black Onyx in the last stride. A head separated them both with Bellator ending a game third close behind.

The six-year old mare Bedford may not be a classy sprinter yet she proved that she is one of best in Hyderabad today. The Neelesh Rawal nursed Bedford (Phoenix Tower - Browning), though neglected in the betting, made her rivals including favourite Ayr chase her shadow after taking a smart jump from the gates. Apprentice Santosh Raj showed no signs of nervousness as he kept Bedford on course for her fifth win under Rawal's care. Ayr moved resolutely when alerted by Akshay Kumar but was well and truly beaten for speed by the winner. Kingston's late charge got him the third spot with Stunning Force ending a faraway fourth.

Original Sin, the well-bred filly mentored by RH Sequeira, made a winning debut in the day's first race. Akshay settled the favourite in the mid-bunch as Smart Striker showed the way to the field of eight with second favourite Windsor in hot pursuit. Original Sin manoeuvred her way at the turn and was poised to launch her assault but she was almost squeezed out when Only The Brave shifted in. Akshay however pierced through the slim opening available between Windsor and Only The Brave and zoomed forth to overwhelm Smart Striker within a few strides. Windsor, who ended fourth, suffered as Afroz Khan tried switching lanes which allowed Only The Brave and the winner's barn-mate Shadow Of The Moon to take the minor places.

Barbet, also from Sequeira’s yards, suffered her second career defeat at the hands of True Icon in the Brave Hunter Cup. Wind Sprite assumed the front-running role and surprisingly refused to budge when challenged by Thanks. An exhilarating finish unfolded as Kiran Naidu made his move astride favourite Barbet. True Icon was spurred into action at this stage by B Nikhil whilst Strauss was given an impossible task of finding his galloping shoes by Akshay when making his bid from way back.

Meanwhile, just when Thanks had dealt with Wind Sprite, Barbet swooped down on her to lead briefly. But Nikhil failed to inspire the favourite to thwart Ravinder Singh groomed True Icon (Sedgefield - Saporelli), whose elongated neck at the post frustrated Barbet yet again. Strauss a length away and had Thanks a head away. Wind Sprite was a bit unlucky as he was forced to drop back after being interfered by Thanks.

Having lingered in the maiden ranks for long, LVR Deshmukh trained Ivanhoe finally found his mark when entrusted to a 5kg-claimer, Kuldeep Singh. Ivanhoe (Top Class - Isle Of Avalon) came out well from the outer draw to hit the front and won almost untroubled all the way. Akshay astride runner up Master Touch made a futile bid to catch the winner nearer home. Royal Pal and Mireya completed the judge's frame.

Nikhil achieved a double when he steered the 15 to 1 longshot Role Model (Planetaire - Miracle Of Love) to a narrow win over Superstellar in the Bonzer Cup. Superstellar, ridden by apprentice Kuldeep, went on a pillar-to-post mission and almost achieved it. Role Model, who was in close attendance behind Superstellar, ranged alongside with a furlong and half left for home. They both fought a ding-dong battle with Role Model putting paid to Superstellar's hopes by half-length despite veering out under pressure in the dying moments of the race. Resurgence and Special And Thong followed them home. Akshay-ridden on-money favourite N R I Ultrapower ran far below par when ending fifth.

Gaurav Singh ridden General Atlantic (Smuggler's Cove - Sine Qua Non) landed the spoils in the concluding event. Ravinder Singh-saddled General Atlantic overcame his lethargic start and made steady progress in the final run-in to challenge leader Show Me Your Walk, who almost kicked on. Backmarker Painted Apache unleashed a brilliant when coming through the shortest way home but General Atlantic's final burst, however, sealed his fate as he went down by a head. Favourite Campania failed to quicken after racing prominently in the front and could only finish third, a nose ahead of Show Me Your Walk with Angelita and Sun Dancer in close tow.