Rare And Precious Asserts His Superiority 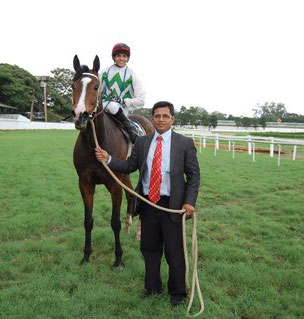 The Mysore Main Season 2011 got off to an interesting start with Bangalore-based horses dominating the afternoon's action on Thursday. With The Mysore Race Club enhancing the stake money during this 20-day season, and announcing a bunch of added incentives, the completion is bound to become intense and racegoers can look forward to some exciting action in the next couple of months. Despite incessant rains over the last few days, the track looked in perfect shape for racing. Even though the going was officially "soft", the results showed that it had made little difference to the final outcome of most of the races. Fancied runners ran true to form and many first choices were able to carry the public purse to victory. It was also an afternoon of "double's", as we saw Chandrasekar, Ladjadj Stephane and Vinod Shinde sharing the day's honours with trainer Prithviraj.

The HH Sri Narasimharaja Wadiyar Memorial Gold Cup, a sprint handicap for horses rated in the highest class, happened to be the day's feature. With a dozen runners accepting to face the starter, the race had an "open" look. However, the one horse that merited attention was Rare And Precious (Juniper-Erina). This Prithviraj-trainee had run some nice races during the summer months and had finished close behind reputed sprinters like Successor and Valahak. He had also succeeded in shedding a few points in his ratings, and was advantageously placed at the scales today. Byramji's Missoni was a firm favourite to win this race. It was felt that the four kilos claimed by apprentice Vaideeshwaran would make a big difference to her chances. Atlantus and Lads Gladiator were the other runners that were actively considered by the punters. However, at the end of it all, Rare And Precious came with giant strides to claim the first prize. Allowing no-hopers Mighty Heart and Miss Ruby to lead on sufferance, the fancied ones were held back till they reached the bend. Missoni made the first move and led into the straight. She was chased and passed by Rare And Precious and Atlantus in the final furlong. With Vinod Shinde riding hands and heels, the free-striding horse got stronger with every stride and retired as a comfortable winner ahead of Atlantus, Missoni and a late-finishing Flaming Lamborgini.

The Prithviraj stable succeeded in landing a "coup" with the four-year-old Seven Heaven (Brave Act-Sunny Clime). This horse was kept under wraps in his three unplaced starts during the summer months. On the other hand, horses like La Clique and One Cool Cat had been running prominently during the same period. After entrusting their ward to an extremely ordinary rider like P Ramesh, they backed Seven Heaven down from 12/1 to 5/1. Their confidence was well placed as the boy did not have much to do on this runner. Actually, all he did was to keep him away from trouble. Seven Heaven took a level start and settled down comfortably behind One Cool Cat, Thumping Victory and La Clique. Ramesh waited for a while, pulled his horse towards the centre of the track and asked him for an effort. Seven Heaven leapt forward and charged away from Thumping Victory and Mr Hurricane. One Cool Cat and La Clique stopped in their tracks and faded away from the scene.

It could have been a treble for the stable, had Sparkling Image succeeded in holding The First Bullet (Case Law-Cosmic Flash) near the winning post. Since Sparkling Image had won an earlier race with Raja Rao, Prithviraj chose to give him another chance. The boy followed instructions and rode a perfect race. The only thing that went against him was his inability to ride a stronger finish. As compared to Chandrasekar's riding on The First Bullet, Raja Rao's efforts looked quite feeble. The Sharat Kumar trainee got up on the last stride to pip the leader. Star League and Sterling Speed filled the rest of the frame.

The above mentioned victory enabled Chandrasekar to start his personal campaign on an exciting note, as it isn't too often that we see a jockey winning the first two races of a season. Kishore-trained Just Great (Serious Spender-Wild Rain) gave him an armchair ride to victory in the day's opener. The recently demoted Just Great was running against Mysore-based horses. He took a good jump, settled into a comfortable lead and kept increasing it till they reached the wire. Wimbledon Star chased him all the way. The run that caught one's eye was that of Leather Queen. Despite taking a fly-jump at the gates, she rallied strongly to end an impressive third. She seems to have re-gained her old form and looks set to score before the end of this season.

Trainer Padmanabhan chose an "easy" race for three-year-old Field Marshal (Placerville-Shamaaal) by running him in a handicap race against a bunch of older horses. Field Marshal had been distinctly unlucky during the Bangalore Summer Season. In his campaign to emerge from the maiden ranks, he had run into horses like Hill Dioro and Swiss Don. Both these horses not only won the said races, but also gone on to score smashing victories in open company. The bookmakers refused to offer odds on this horse and he started as a money-back favourite to win today. Field Marshal was never off the bit while scoring in a common canter. He is likely to be targeted at the Mysore Classics.

The two divisions of The Datta Jewellers Gold Cup, a sprint handicap for horses five years old and over in Class III, were won in identical fashion. The winners led from the word "go" and proved to be too strong for their opponents. Warren Singh's Game Dancer (Diffident-Thunderous) was entrusted to apprentice Kumar. The speedy mare loved the four kilos off her back, and showed a clean pair of heels to Skyfleet and the well-supported Corleone. But for Gaurav Sapra dropping his whip near the bend, Skyfleet would have finished much closer to the winner.

Ladjadj Stephane made full use of a chance opportunity that he got astride Bipin's Rumour Proof (Burden Of Proof-Wild Rumour). With the declared jockey PS Chouhan being unable to fulfil his riding engagements for the day, the stable chose the Frenchman. He rushed Rumour Proof to the front and pushed her relentlessly till they crossed the wire. The fancied trio comprising of Nectar Crown, Enduring Speed and Black Beauty finished at regular intervals to occupy the minor placings. The last-named's progress was hampered by a lost shoe near the 600-metre marker.

The last race produced the most thrilling finish of the afternoon. The seven-furlong event for highly rated horses had quite a few serious contenders. With Vinod Shinde replacing Chouhan on Gazaki (Burden Of Proof-Acer), the odds against the filly began to expand rapidly. Camorra cornered a lot of support to emerge as the favourite at race time. Ryan Marshall pushed Honey Buzzard to the front and the three-year-old filly entered the straight with a distinct advantage over Perfect Bond and Theworldismine. Gazaki, Aztec Gold and Camorra made their moves from the back, and the three of them came charging down the middle. The better acceleration shown by Gazaki enabled her to hold Aztec Gold and Camorra in a three-way finish. Honey Buzzard got extremely tired and ended a tame fourth.