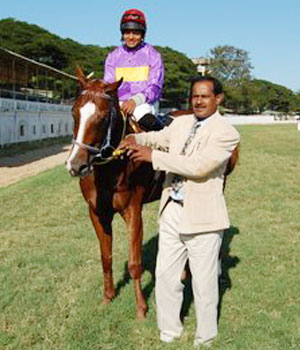 After performing pathetically as a fancied runner less than ten day's ago, Md Khan's Dramatic Dancer turned the tables on her vanquisher Joriki and some others to win The Civil Services Cup at the Mysore races on Tuesday. The sprint handicap, for horses rated 60 and above, featured an ordinary looking card of eight events framed for the afternoon. Rakesh trained Lake Emerald was the only three year old in a group of ten acceptors. The bottom weighted filly was known to be a speedy type, and the presence of an allowance-claiming apprentice enhanced her chances. However, Dhariwal trained Joriki headed the betting charts. The five year old mare had beaten a similar set of horses in an earlier clash, and was participating with a winning penalty. Joriki was an obvious choice for those who had watched her earlier race carefully. She had encountered numerous traffic problems at the start, was forced to travel wide for most of the way, and despite all these hinderances, had produced a sparkling turn-of-foot in the straight to register a facile victory. A hard ridden Dramatic Dancer had finished a poor sixth in that race. With L Stephane continuing to partner her, Joriki started as a firm favourite ahead of Lake Emerald and the others.

Miss Ruby, Game Dancer and Lake Emerald jumped smartly from the gates and set a decent pace ahead of The Spartan, Perfect Bond and Dramatic Dancer. The favourite was held back in seventh, while the others were struggling to keep pace with the leaders. The runners began bunching up at the top of the straight. Lake Emerald ducked towards the inner rails and showed out briefly at this stage. Joriki moved menacingly through the middle, while The Spartan and Dramatic Dancer began their charge on the wide outside. After a serious tussle in the final furlong, Dramatic Dancer managed to put her neck in front of Lake Emerald, The Spartan and Joriki. Just about a length covered the first four finishers. Apprentice Bharath showed a lot of enterprise while guiding the winner. The most important factor in this victory was the unhampered passage enjoyed by Dramatic Dancer. She was allowed to run her own race, and the youngster pushed her vigorously in the last hundred metres to post a surprising victory. Dramatic Dancer paid in excess of 20/1 at the totalizators.

Jockey Stephane managed to score a popular double with a couple of short priced favourites on Tuesday. This enabled him to join Sreekanth at the top of the jockey's tally. The difference between the two professionals is the fact that Stephane has ridden less than half the number of runners partnered by Sreekanth this season. The first of the two victories came astride Attaollahi's Castro. The big made horse had shown early promise, but his subsequent performances had been disappointing. He was gelded towards the end of the Bangalore Summer Season. The Delhi Race Club Cup, a sprint race for maiden three year olds, was chosen as his next target. There was huge support for him in the betting rings. Castro took a while to get into his strides, but once he did so, the race was over. He overtook early leader Koosha in the straight and went away from a hard ridden pair of Sparkling Star and Time To Time. One cannot read much into this victory as it was achieved amongst a poor lot of horses. Castro will have to improve considerably to make his presence felt in "open" company. The horse also showed that he preferred it a bit longer.

Stephane had a much easier time astride Dhariwal's Panamera. The well-bred filly had impressed all concerned with her victory in a maiden's set at Bangalore. Her smooth action and the fast timing that she had clocked that day were enough to show that she belonged to a much higher category. The handicapper gave her a stiff penalty and rated her immediately in class III. She was given a nice rest before being sharpened on the training track. Running as one of the shortest priced contenders this season, she romped away with The WT Craig Jones Memorial Gold Cup. Assuming command from the word "go", Panamera raced well within herself to sail away from Flame Back and Bright Star. The bandaged Flame Back seems to be re-discovering her old form, and the four year old filly can be placed by Neil Darashah to pick up a race reserved for horses in her own age group. Panamera is sure to move further up the ladder.

JS Pillay's Spark Of Diablo became the first horse this season to register a third successive win at Mysore. Coming from a horse who had remained a maiden till just a few weeks ago, this was a superb performance. Within a period of five weeks, four year old Spark Of Diablo had reeled off a hat-trick of victories. The trainer changed his style of running, and this seems to have worked perfectly for him. In the earlier stages of his career, Spark Of Diablo was campaigned for eventual speed. He used to come with a late burst, but that was never good enough. The new tactics have done him a world of good. Racing prominently in the back-stretch, Spark Of Diablo seized the initiative near the bend. Apprentice Pradeep gave him a couple of cracks and the response was immediate. He darted forward and managed to hold favourite Beautiful Life till they crossed the wire. Super Sha and Fire Star managed to fill the rest of the frame.

A seven furlong handicap for horses in class IV was split into two divisions. Puttanna's Sudden Magic was an overwhelming favourite to pick up the lower division of this race. A horse who had run behind Mablshwar Memories and Starista, and ahead of the talented Saganaki in his only start at Mysore, deserved his place at the top of the betting boards. Ridden in check for the first half of their journey, Gautam Raj asked him to quicken at the bend and the horse did the rest. Sudden Magic increased the momentum and went away from The First Bullet and Ceasaria. The winning margin of nine lengths tells the complete story.

The upper division happened to be the last race of the day. There was much support for Rakesh's Sky Empress. Despite possessing fairly ordinary credentials, the filly was backed with confidence. Those who had chosen to do so with Afsar in the saddle, were forlorn at the end of the day. She refused to raise a fluent gallop at any stage of the race and ended a poor fourth. Ranjeet's Happiness came with raking strides to overhaul Bullish Luck and Sky Rider near the winning post. Being a Mysore based runner, Happiness should be able to win another race in "local company".

The only other event in the day's card was the day's opener. This mile race for horses rated 40-65 looked extremely competitive. On closer examination, every single horse seemed to have an equally good chance of landing the spoils. The final result confirmed this opinion. Only a couple of lengths separated the first five finishers. Last outing winner Dutch Hero tried runaway tactics and showed the way to Yanamaria, Faustian, Glitterato, Vayuputra and Theworldismine. They bunched up near the bend and it was difficult to spot a likely winner at this stage. Some were getting tired while the others were holding their positions. Vayuputra moved the best of the lot and got up in time to beat Dutch Hero near the final post. Faustian and Theworldismine finished alongside taking the minor placings.