A Win For Kohinoor King 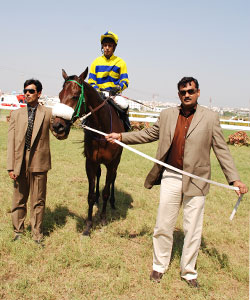 Laxman Singh trained Kohinoor King did well to win the Mir Fazilath Hussain Memorial Cup, the feature race on Monday at Hyderabad. The winners circle had eluded this 3 year old gelding, having placed in all the four runs in Monsoon. Showing the way to his five opponents from the start, Kohinoor King, galloped gamely on the straight and pegged back Ruby Rouge’s sustained challenge. Fly by Wire ran below par to finish third.

The day clearly belonged to trainer M. Sathyanarayana, sending home three winners. Tommy Hilfiger started the day in what looked like a procession. After jumping out well, Tommy Hilfiger was sent to the front by jockey Shoban Babu and from then on, he had to just stay on, while the rest preferred to follow till the finish.

Luck was on Sathyanarayan’s side in the higher division of the Taramati Cup. Casablanca just got the nod in his favour at the all important end, winning by the shortest of margin, in a three way finish. Shoban Babu was astride the winner again. Mr. Don led all the way from the start and was shaping like a winner when Casablanca and Dhruthiman swooped on him and the three went past the winning post almost together. While Dhruthiman looked to have finished third, the magic eye was required to separate Mr. Don and Casablanca.

Jockey Lakshmikanth, who had replaced an injured Chary, rode Disco Flash to a smashing win, in the lower division of the Grand Entry Plate. The favourite Lone Ranger took up the running from Al Jeezaan near the 800 metres and led till the last 100 metres where he had to surrender meekly to Disco Flash. Kohinoor Mystic was withdrawn after he started to play up in the gates.

Deshmukh’s Storm Force had earlier won the lower division of the Taramati Cup in a stunning upset. Money from all quarters was flowing only in the direction of Sweet Heart who stayed firm at 10 to 4 ‘on’. She turned out to be anything but a ‘Sweet Heart’ in the race, letting down a large following.

Jewel in the Crown upset the field in the Youngsters Plate, for first timers. Da Xia and Jewel in the Crown fought out stride for stride on the home stretch and the latter prevailed by a ‘head’ at the post. Alybro who was considered to be unbeatable before the race, proved to be a disappointment, ending up a poor fourth. Art Connoisseur was withdrawn after the jockey Ch. K. Chary hurt his wrist when his mount reared up in the gates.

Ananth Vatsalya’s Golden Tricks justified the favouritism while winning the Own Opinion Plate.

Rythamic Gymnast won the higher division of the Moment of Glory Plate from start to finish although drifting out on the straight. Donna Summers was withdrawn after she refused to move into the gates.