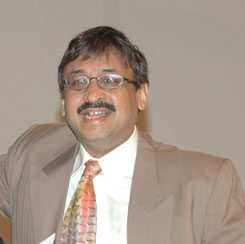 Normalcy has returned to the environs of the famous Mahalaxmi race course after the hustle and bustle of high profile election to the Managing Committee held on Thursday, December 21. The most fiercely contested elections saw Dr Cyrus Poonawalla winning an unexpectedly massive mandate, giving him an absolute majority in the committee room. The Johnnie Walker Indian 2000 Guineas which was held with great fanfare, with the attendance showing an increasing of 75 per cent over the previous years, brought the focus back on racing.
In an unexpected move, Vivek Jain, who topped the votes for an unprecedented fourth time in a row, was chosen by the new stewards’ body as the Chairman of the Stewards for the year. It is believed Mr. Jain could well be one of the youngest ever to hold this important portfolio. Mr. Jain's team rode in with increased public confidence in the conduct of racing, and he has his task cut out, in this his first year.
The only new face in the Stewards room is Mr. Gulam Vahanvaty, who comes in for Mr. Sunil Jhangiani, who lost his seat. Mr. Vahanvaty is respected for his sober and independent thinking over years of racing experience.
It is gathered that Dr Cyrus Poonawalla and his team did offer a stewardship to one member of the opposing alliance, Mr. Shyam Ruia, who declined.
The splitting of the Chairmanship of the Club and Stewards between Dr Poonawalla and Mr. Jain meets the demand of several senior members who felt that no one individual should head both bodies in the interest of division of power.