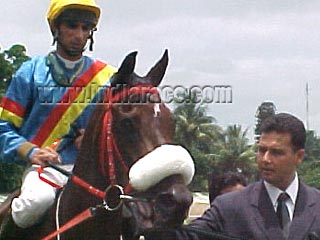 Bay of Angels (Pesi Shroff up), winner of the Mystic Memory Plate Div-I being led in by trainer M.Eshwer

Darius Byramji trained Antequera came up with a brilliant performance to down the front-running favourite Noble Executive to win the K N Chennabasappa Memorial Cup which featured the penultimate day’ Summer Racing Season on Saturday. Jockey Christopher Alford rode one of those rare brilliant races on Antequera by keeping the son of Green Forest covered up in the rear till turning for home and then timing his challenge to a nicety.

Noble Executive has been a rousing performer over a sprint but over the extended trip of seven furlongs, he was still considered good enough to win despite taking on a seasoned bunch of runners. Antequera no doubt was well placed in scales but since he had been an under-achiever, his claims were not considered bright enough. May be the rare presence of leading owner Deepak Khaitan at the course perhaps inspired the combination of the jockey and the horse to put in a fine show. Affined battled on take the third spot ahead of top-weighted Blue Hare.

Jockey Prakash settled Noble Executive a handy second while Antequera was in the rear, with Blue Hare racing on the wide outside. Walk In The Clouds who stayed on the inside of Blue Hare hampered Jockey Pesi Shroff. Shroff elected to race Blue Hare on the outside, as the son of Brave Hunter tends to hang if raced along the rails. Rounding the final bend, Noble Executive took over the running and shaped like a winner but was done in by the brilliant stretch run by Antequera. Alford brought Antequera through the middle with the minimum of fuss and had the son of Green Forest going in top gear to down the front-runner close home. Affined was a good third while Blue Hare who seems to have his old form, was a tame fourth.

However, Alford was found wanting when adopting similar tactics on well-fancied Angeles in the Ruia Stud Plate (Div I), a race for horses rated 30 to 45. Swinging Contest set a fast pace and stayed on to finish third. Regal Society, who relished the fast pace, warmed up sufficiently by the time the runners took the final bend and surged ahead inside the final furlong even as Angeles who was hopelessly positioned at the top of the straight finished full of running to be an eye-catching second ahead of long time leader Swinging Contest. In the upper division of the race, two newly licensed apprentice jockeys fought out the issue, with Christopher on Rio Tinto managing to steer his mount ahead of Strides of Fire, ridden by Ashwin Rao. The five-kg allowance claimed by these jockeys ensured that the rest of the runners were left with a hopeless task. Rio Tinto, despite being poorly placed well into the straight, finished with a rattle to get the better of Strides of Fire close home. These two apprentices are talented and can progress well if they work hard. Kimera who was bidding for a hat trick, was swept off his feet by the rest.

Shroff had mixed luck in the Mystic Memory Plate, a sprint race for maiden three year olds. In the upper division, San Antonio was founding when the pressure was applied on him and went down meekly. Pelf who has been pretty consistent this season shot ahead inside the final furlong and held on to win from a late-finishing Cherry Blue. In the lower division, Shroff had no problem in steering Michael Eshwer trained Bay of Angels to a facile victory over Cardinal Rule.

Fly For Fame was backed to the exclusion of her rivals in the Ministrella Plate (Div I) but the favourite flopped miserably. The filly clearly was not enjoying her outing and went on to Ideal Cut under pressure. Beat It Dude moved up from behind to record an impressive win in his maiden effort itself. Talented Lady relished the extended trip better to finish second ahead of Red Zeppelin. Beat It Dude looks like a good type of youngster. In the lower division, favourite Generic Emperor proved too superior to Silver Victress.

Darius Byramji trained Rose Garden showed good improvement to get the better of favourite Baffert in the Maj Newton Davis Memorial Cup. The son of Local Talent, Baffert assumed command inside the final 250 metres but was hard-pressed to keep the lead from Rose Garden who eventually got stronger at the finish. Noble Lancy who was given a light ride, is ready to strike.