Below par performance by Prakash 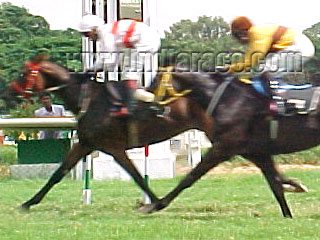 Rose Garden (K.P.G.Appu up), winning the Camino Plate from Another Time (B Prakash up)

Jockey Prakash has been enjoying a glorious run, which has often been interrupted by some poor rides that he could do well to avoid. He rode a poor tactical race on Bold Chieftan in the feature event of the day on Saturday and rode an ill-judged race on Another Time but was lucky to get away as he was sheltered by the trainer’s instructions which was to keep his mount way off the pace and get the horse to do everything in the home stretch. In the event, Another Time who was full of running and could have won easily won had the filly been ridden with more purpose was made to do too much and the daughter of Steinbeck fell shy by half a length to lesser-fancied Rose Garden.
Bold Chieftan was set to concede chunks of weight to his adversaries but considering that the son of Placerville was a cut above the rest, he was expected to defy the handicap disadvantage. Bold Chieftan is known for his blinding speed, which could throw his opponents out of gear. The weight seemed to have told more on the jockey rather than on the horse as Prakash chose to restrain Bold Chieftan in front. In the event, bottom-weighted Silvertre could pace along with him and surge ahead, exploiting the low weight on the back on turning for home. Yewall too moved up quickly and Bold Cheiftan was hemmed in along the rails. Prakash had to switch Bold Chieftan from the rails but the game performer nevertheless came up with a good burst to overtake Silvertre but was unable to collar Yewall who had opened up a winning lead. Had Bold Chieftan been allowed to run freely in front as is the practice all along, the big striding five-year old gelding would have had a useful lead at the home turn without having to be expended and the star performer would have held on.
Jockey Christopher Alford was found wanting on two occasions during the course of the day. He took off on Assumer on a start to finish mission in the 2200 metres Kumararajah M A M Muthiah Cup but failed to pack punch when top-weighted Firecrest, under the vigorous riding of Aslam Kader, essayed a challenge. Assumer buckled in the shadow of the post. Alford is still to develop into a forceful rider. Sky Rocket failed to stay the trip while Pretty Move appeared to be a spent force. Later in the day, Alford failed to deliver the goods on Arcaro, attempting identical tactics but losing on the post to strongly fancied Forest Rose who despite drifting out under pressure won in the hands of persevering Harish.
Trainer Dominic brought off a quiet touch on Nimitz who proved too good for the opposition in the Royal Tern Plate (Div I). Jockey Rajinder had Nimitz take charge inside the final 350 metres and the son of Foresee stretched away from the rest to win as he pleased. Anchor battled on to finish second. However, Dominic’s In A Flash who received some inspired support, failed in the lower division of the same race. In A Flash found the sprint too sharp for comfort and by the time he gained momentum, the race was in the safekeeping of Rhythm `N’ Blues. Fancied Three Coins was not sighted.
Mythical Star, who had finished behind Assumer in his previous essay, swamped the opposition in the 2200 metres Noble Princess Plate where rank outsiders Relic Hunter and Royal Contender disputed for minor placings. In the day’s opener, Energizer, full brother to the celebrated Wild Eagle, came out of the maiden ranks albeit narrowly from Slim Twist where apprentice J Chinoy failed to give the desired assistance. Energizer is not the same league as his full brother.